Jeremiah Horrocks - Father of British Astronomy Content from the guide to life, the universe and everything 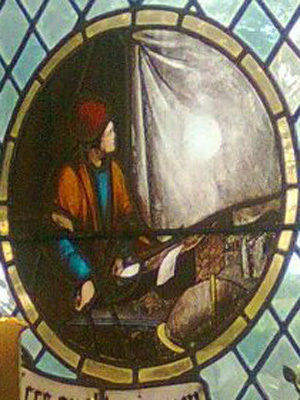 Jeremiah Horrocks was born in 1619 in Toxteth, Liverpool. His father was a watchmaker and the family were deeply religious Protestant Puritans. Jeremiah was a brilliant scholar and won a place at Cambridge University at the age of 14. By then he was already well-versed in Greek, Latin and the Scriptures. He moved to Much Hoole, Lancashire, where he was a curate at St Michael's, the local church1.

Before reading his story, it is important to understand the belief system of the 17th Century. The majority of people believed in alchemy, magic and witchcraft. There were no laboratories and there was no organised scientific research. The educated classes knew that the Earth was round, but hardly anything about astronomy. This was (Protestant) England: it was not considered heretical to believe that the Earth orbited the sun as it was in (Roman Catholic) Italy, but it was still a radical belief.

Jeremiah had read everything he could about the work of Johannes Kepler (1571 - 1630), the German astronomer who established the laws of planetary motion. Kepler had correctly predicted the Venus transit of 1631, but there is no record of anyone who witnessed it. Kepler stated that the next transit would be in 1756. Jeremiah, however, disagreed with this calculation. He worked out that Venusian transits occur in pairs, eight years apart, then either 105 years or 121 years later. This made the next one due in 1639, and it would be visible from Europe.

For a young man of 20 to disagree with a published, famous astronomer - and then be proven correct, was extraordinary. Observing the transit he'd predicted must have given him great satisfaction. He was able to use his data to calculate the sizes of the sun and the other planets in our solar system. He found that the sun was in fact gigantic - with a volume more than a million times that of the Earth. Jeremiah showed that the planets Jupiter and Saturn were giants, totally opposing the biblical view that our own planet must be the grandest in creation. This must have caused consternation to the deeply religious young man. Pioneers like Giordano Bruno (1548 - 1600) had been burned at the stake for that very 'heresy' - Bruno met his fate in Italy only two decades earlier.

The biblical account of the universe still dominated even well-educated minds. What we know now, that our Sun is a star almost a million miles wide, attended by planets (and their own moons) who move in their own orbits, was almost unimaginable, and only the finest minds dared to think it.

In 1638, Jeremiah Horrocks had confirmed Galileo Galilei's discovery of Jupiter's four large moons. He found out what comets2 were - visitors to our Solar System with erratic orbits. He also worked out that planets shine because of reflected sunlight. The first to begin to take a series of tidal observations, (before he was 20 years old), he had formulated his own theory of gravity decades before Newton's theory.

On Sunday3 24 November4, 1639, all but two of the members of the Earth's population had no idea of the momentous event which was about to happen. The first transition of Venus across the face of the sun since the telescope was invented. This transit can only occur when the Earth, Venus and the sun are exactly aligned. One of those men was Jeremiah Horrocks. He had already written to his friend William Crabtree, urging him not to miss the once-in-a-lifetime event.

Jeremiah's observations of the transit began at 3.15pm. He had attended his duties at the church and the service had ended just before 3pm. He had set up his equipment earlier in the day so that when he returned for the alignment, he only had minor adjustments to make to his telescope. He focused the sun's disc onto a piece of card and traced around it. Then he saw the small black spot (Venus) starting to edge across the solar disc.

'I watched carefully on the 24th from sunrise to nine o'clock, and from a little before ten until noon, and at one in the afternoon, being called away in the intervals by business of the highest importance5 which, for these ornamental pursuits, I could not with propriety neglect. But during all this time I saw nothing in the sun except a small and common6spot. This evidently had nothing to do with Venus. About fifteen minutes past three in the afternoon, when I was again at liberty to continue my labours, the clouds, as if by divine interposition, were entirely dispersed, and I was once more invited to the grateful task of repeating my observations. I then beheld a most agreeable spectacle, the object of my sanguine wishes, a spot of unusual magnitude and of a perfectly circular shape, which had already fully centred upon the sun's disc on the left, so that the limbs of the sun and Venus precisely coincided, forming an angle of contact. Not doubting that this was really the shadow of the planet, I immediately applied myself sedulously to observe it'.

Jeremiah was overjoyed. He drew the position of the black spot on the card and watched avidly over the next few hours, tracing his observations and timing each one. Thirty miles away, Jeremiah's friend William Crabtree had also made preparations to view the transit, but it was too cloudy. However, just before sunset, the clouds cleared and he was able to witness the spectacle. He wrote that he was 'rapt with joy' and confessed to a 'womanly display of emotion.'

An untimely end and legacy

A year and two months after his historic prediction and observation, Jeremiah Horrocks died. However, his work lived on, and a scientific paper of his was published on the continent in 1662. This brought him to the attention of the Royal Society, a collection of the finest scientific minds in Britain. Horrocks' paper revolutionised man's understanding of the solar system. His conclusions were tested by members such as Sir Christopher Wren and found to be sound.

Sir John Herschel called him 'the pride and boast of British astronomy.'

If I have seen further than others before me, it is because I have stood on the shoulders of giants.

Jeremiah Horrocks is now known as the 'Father of British Astronomy'; he had a tragically short life (he was just 22 when he died), but he left a legacy which lives today. Thanks to him, Venus transits can be predicted with accuracy. The most famous took place in 1769 when the British explorer Captain James Cook, sailed to Tahiti in order to observe the transit.

In 1874, Horrocks was eulogised with a plaque7 in Westminster Abbey.

1The east window, and one in the north wall, are commemorated to Jeremiah Horrocks, the astronomer.2The general population thought they were signs from the devil.3If England had changed calendars on October 4/15 1582, when Pope Gregory XIII introduced 'his' calendar, the Venus transit would had taken place on a Thursday, which would have left much more time for Jeremiah to watch it.4Julian calendar. The Gregorian date was 5 December - a Thursday.5Church services.6This comment reveals that Jeremiah studied the sun regularly.7'AD MAJORA AVOCATUS QUÆ OB HÆC PARERGA NEGLIGI NON DECUIT'. IN MEMORY OF JEREMIAH HORROCKS, CURATE OF HOOLE, IN LANCASHIRE, WHO DIED ON THE 3rd OF JANUARY 1641, IN OR NEAR HIS 22nd YEAR; HAVING IN SO SHORT A LIFE DETECTED THE LONG INEQUALITY IN THE MEAN MOTION OF JUPITER AND SATURN; DISCOVERED THE ORBIT OF THE MOON TO BE AN ELLIPSE; DETERMINED THE MOTION OF THE LUNAR APSE; SUGGESTED THE PHYSICAL CAUSE OF ITS REVOLUTION; AND PREDICTED FROM HIS OWN OBSERVATIONS THE TRANSIT OF VENUS, WHICH WAS SEEN BY HIMSELF AND HIS FRIEND, WILLIAM CRABTREE, ON SUNDAY THE 24th OF NOVEMBER [O.S.] 1639; THIS TABLET, FACING THE MONUMENT OF NEWTON, WAS RAISED AFTER THE LAPSE OF MORE THAN TWO CENTURIES, DECEMBER 9th 1874'.