Dark Nebulae Content from the guide to life, the universe and everything 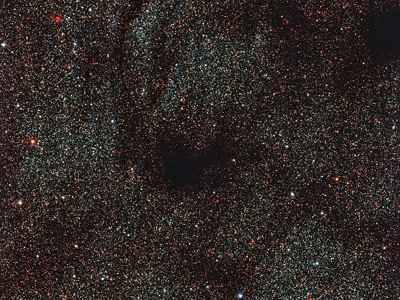 There are many different types of nebula, which are gaseous objects in space, and there is an h2g2 overview entry for general information. This entry is about the enigmatic dark nebulae that we can see from Earth. What is a dark nebula? Their formation is a mystery, but basically they are dense clouds of gas which eclipse the light from background stars and galaxies. They look like gaps in the night sky obliterating what lies beyond, a kind of creeping tentacle of nothingness. They have no set form, and are constantly changing over time – creating spooky shapes, inspiring legends or just invoking curiosity. Nothing in outer space is wasted, everything is recycled. Dust and gas from past supernovas can coalesce to eventually create new stars, and some dark nebulae contain protostars.

Some dark nebulae have been given appropriate names but aren't officially catalogued. Perhaps the most famous example of a dark nebula is the Horsehead Nebula in Orion, but you'd need a powerful telescope to see it, and it will not last forever. This artistic cosmic creation, worthy of Michelangelo himself, is being dispersed by the proximity of a newly-born star, so human eyes can only enjoy the visual feast while they can.

People in the Southern Hemisphere are luckier in that they have dark nebulae which can be seen by the naked eye, like the Coalsack in Crux. This dark patch in the Milky Way was first documented by the Portuguese navigator Vincente Yanez Pinzon in 1499. In Maori legend the Coalsack is known as Te Paniwi a Taewa (the Black Fish), whereas Australian Aboriginals know it as the head of Dinewan the emu, whose body is made up of dark clouds within the arm of the Milky Way.

The Coalsack was very important in Larry Niven and Jerry Pournelle's classic sci-fi novel The Mote in God's Eye. In this, there was a red supergiant star called Murcheson's Eye hidden in the Coalsack, with a small star known as the Mote orbiting it. There were intelligent aliens living in the planetary system of the Mote.

Other dark nebulae are the wonderfully-named Dark Doodad Nebula in Musca 'the fly', which is over 30 light years1 in length and roughly 700 light years distant. Then there is the Great Rift, which features extensively in legend and constellation lore. Another Southern Hemisphere favourite is Bernes 157, over 500 light years away in Corona Australis, which is currently shaped like a boomerang. Crab-shaped Lupus 4 is 400 light years from our Solar System and spans two constellations, its namesake Lupus 'the wolf' and Norma.

Edward Emerson Barnard (1857-1923) was an American astronomer. He discovered Proxima Ophiuchi, a nearby red dwarf star, which is now known as Barnard's Star. This aged star is so famous that it was mentioned in The Hitchhiker's Guide to the Galaxy by Douglas Adams. EE Barnard discovered over a dozen comets and Jupiter's moon Amalthea during his career, as well as producing a catalogue of 182 dark nebulae which he called 'Barnard objects' in 1919. They were not all his discoveries though, for example, Scottish astronomer Williamina Fleming catalogued the Horsehead Nebula as Fleming 21 in 1888, yet its official designation is Barnard 33 from Barnard's observation in 1913. Barnard's catalogue was expanded to 369 objects in 1927, although some dark nebulae have dissipated and no longer exist.

Barnard objects of note are:

American astronomer Beverly Lynds produced the Lynds Catalogue of Dark Nebulae in 1962. One of the most distinctive is L1157 in Cepheus, which includes protostars (young stellar objects in the process of formation). Another dark nebula star-forming region is LDN 988 in Cygnus, which was featured on the Astronomy Picture of the Day (APOD) website in September 2015. The dark nebula LDN 1622 in Orion blocks out part of M42, the famous Orion Nebula. Bird-shaped LDN 483 lies approximately 700 light years away in the split constellation Serpens.

Pluto is incredibly difficult to locate for amateur astronomers, but a dark nebula serendipitously made the job a whole lot easier in early July 2010. The background stars were blotted out by Barnard 92 when Pluto sailed across the dark nebula, and the dwarf planet became quite distinctive. APOD marked the occasion with this tribute, even pointing out Pluto for the curious. We must say, though, that this close-up is much better!

Living in a Dark Nebula

In the book Life, the Universe and Everything by Douglas Adams there was a planet called Krikkit which was inside a dark nebula. As a result the inhabitants had never seen the stars. When they did, they didn't like them so they decided to eliminate all the stars in the Galaxy other than their own, causing a massive interstellar war which lasted two thousand years and some two 'grillion' deaths.

As an extra treat, here's a selection of dark nebulae images:

1A light year is the distance light travels in one year, roughly 5.88 trillion miles or 9.46 trillion kms.