Oysters Content from the guide to life, the universe and everything 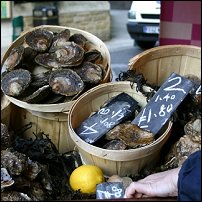 Oyster, n. A slimy, gobby shellfish which civilization gives men the hardihood to eat without removing its entrails. The shells are sometimes given to the poor.
- The Devil's Dictionary, Ambrose Bierce

Oysters - are they a beautiful delicacy; the ultimate food of love? Are they guaranteed to turn the object of your desire from a frigid 'no' to a raging 'yes, YES, YES'? Or are they a thoroughly slimy experience, redolent of salt 'n' sewage, that no sane person would want to introduce to their oesophagus1?

Falstaff:
I will not lend thee a penny.
Pistol:
Why then the world's mine oyster,
Which I with sword will open.
- The Merry Wives of Windsor Act II Scene ii, William Shakespeare

Oysters are bivalve2 molluscs of the Ostreidae family that make their homes in salt water, often in estuaries or other tidal regions. They feed by filtering water through fine hairs ('cilia') which trap plankton, algae and other small particles. This passive feeding method means oysters have little control over what gets caught in their 'net'. The more polluted the oysters' environment, the more unsavoury their diet. This means the oyster can contribute to improving water quality in much the same way that a kitchen waste disposal unit contributes to the quality of domestic drainage. The major difference being, of course, that few people regularly eat the contents of their waste trap.

During their life cycle, oysters pass through stages in which their sex changes. They start out male, producing sperm, and later switch to become egg-producing females - a process known as 'protandry'. The eggs are released into the water where they are fertilized by the aforementioned sperm. The juvenile oysters are known by the charming name 'spat'.

I will not eat oysters. I want my food dead. Not sick, not wounded - dead.
- Woody Allen

Oysters have been eaten by humans since long before historical records began, despite their unappealing outer appearance. As Jonathan Swift is reported to have said, 'He was a bold man that first ate an oyster'3.

Throughout history, oysters have gone through phases of popularity with rich and poor alike. Along with fish and other forms of seafood, they were originally a staple of coastal communities that acquired much of their diet from the sea. During Roman times they became something of a delicacy, with oysters shipped from northern parts of the empire back to Rome. In Victorian England, oysters were once again the food of the poor. In The Pickwick Papers, Charles Dickens had Sam Weller observe that "the poorer a place is, the greater call there seems to be for oysters", and that the act of eating oysters is one of "reg'lar desperation".

They'll be served raw in their shells. You squeeze lemon over 'em and then just pour 'em down your throat. The sensation is a bit like having a bad cold and no handkerchief.
-Nanny Ogg's Cookbook, Terry Pratchett

In modern times, oysters are once more a delicacy in some parts of the world, eaten mainly on special occasions. Food writers, celebrity chefs and other gourmets often wax lyrical about oysters and other fruits of the sea. Arguments rage over whether oysters should only ever be eaten alive, with perhaps a little lemon and vinegar, or if cooking them is acceptable. They have also developed a reputation as an aphrodisiac, although this also goes back to the Romans and beyond. The word 'aphrodisiac' itself is derived from the name of the Greek goddess of love, Aphrodite. The goddess emerged from the sea - the most famous depiction being Boticelli's 'The Birth of Venus' - and thus seafood was often connected with love and sex.

Being simple folk, our ancestors also appear to have got it into their heads that foods which physically resemble genitalia must carry the power to enhance sexual desire, performance and fertility. For example, the shape of another reputed aphrodisiac - rhinoceros horn - carries a certain suggestiveness to a mind attuned to that particular line of thought. Similarly, it is said that the opened oyster shell and its contents bear some resemblance to female genitalia. The best way to appreciate this is to screw up your eyes very tightly until you can no longer see the oyster, and then simply imagine female genitalia4.

In truth, there is no basis whatsoever to the legend of the aphrodisiac effect of the oyster5. One suggestion put forward for the oyster's reputation in this department is that their high zinc content may have contributed to overall health in otherwise nutrient-deficient diets. Zinc is also found in high concentrations in semen, and its deficiency can lead to reduced fertility. Zinc deficiency may also be associated with impotence. Simply eating a bucket-load of oysters is unlikely, however, to cause anyone to leap on their partner in an attempt to demonstrate their new-found nutritional balance.

The founder of the Consumer Health Information Research Institute, John Renner, has noted that 'The mind is the most potent aphrodisiac there is.' Subtle lighting, flowers, soft music and witty conversation, combined with a plateful of oysters, may just win over your inamorata. Assuming, that is, that they find the sight of you slobbering and retching as you tip a live mollusc down your throat to be a turn-on.

Whatsoever hath no fins nor scales in the waters, that shall be an abomination unto you.
- The Bible, Leviticus 11:12

Oysters, and indeed shellfish as a whole, make an appearance in the dietary laws of a number of religions. The Old Testament is quite specific on the subject: shellfish are considered to be treif6 by Orthodox Jews.

In theory, fundamental Christians who believe in the literal truth of the Bible should also abstain from shellfish. There is, however, a passage in the New Testament that is interpreted as repealing the prohibitions of Leviticus. In Acts 10:10-16, the apostle Peter has a vision in which God delivers to him a tablecloth full of non-kosher food ('all manner of fourfooted beasts of the earth, and wild beasts, and creeping things and fowls of the air'). God commands Peter to eat, and Peter refuses. God then admonishes Peter, saying: 'What God has cleansed, that call not thou common.' The tablecloth is taken away, and the whole process is repeated twice. The upshot of all this is that shellfish - and all the other myriad foods explicitly banned in Leviticus7 - are now acceptable to almost all Christians. The notable exceptions to this are the Seventh Day Adventists, who still adhere to the dietary restrictions of the Old Testament.

The situation in Islam is more complex, and the position regarding shellfish can differ depending on the interpretation of the scriptures. Oysters may therefore be considered halal (permitted), makruh (permitted, but much frowned upon) or haram (forbidden).

Prohibitions against shellfish also exist in the 'Ital', the dietary law of Rastafarianism, which incorporates parts of the kosher restrictions of the Old Testament.

Thus, before embarking on an evening of oyster-driven pleasure, anyone of a religious persuasion may want to check what their chosen spiritual text has to say on the subject. Then again, if you are sufficiently devout to follow your religion's dietary restrictions, it might not be worth the effort. The chances are that whatever you were planning with your guest after plying them with oysters is forbidden as well.

None of the above answers the question of what God has against shellfish. On the whole, the answer appears to be one of pre-technological food hygiene. Shellfish - like that most classical of non-kosher foods, pork - can harbour a number of nasty diseases which can be transmitted to humans. The most common are Vibrio infections, which are estimated to be responsible for around 60 deaths per year in the USA. Most healthy people will shrug off a Vibrio infection with no symptoms, or perhaps a touch of gastroenteritis. People with a weakened immune system, or those with chronic illnesses such as liver or kidney disease, may, however, be at higher risk of serious disease or death. Other, far rarer, harmful conditions associated with oysters include the various syndromes of shellfish poisoning: amnesic, diarrhoeal, neurotoxic and paralytic.

Another group at risk from oysters are those allergic to molluscs. Symptoms of allergy can range from mild itching of the lips and mouth, to a skin rash (urticaria or 'hives'), to life-threatening anaphylaxis (reduced blood pressure and difficulty breathing). An allergy to molluscs is less common than an allergy to crustaceans (shrimps, prawns etc), but the two may occur together.

Prudencia: Three pearls. In my day, pearls meant tears.
Angustias: But things have changed now.
Adela: Oh, I don't think so. Things always mean the same. Engagement rings ought to have diamonds.
- The House of Bernada Alba, Federico García Lorca

Pearl-producing oysters are those of the family Pteriidae, and are only distantly related to edible oysters. A pearl is formed when a microscopic particle such as a parasite becomes trapped under the mantle of an oyster. To protect itself, the oyster coats the foreign body in a mixture of calcium carbonate and a protein matrix called conchiolin. Naturally occurring pearls are extremely rare, so most pearls available today have been cultured artificially. A small bead is introduced into the mantle of the oyster, and a pearl is formed around it. This technique ensures that the pearls are perfectly round, unlike the often irregular shapes seen in natural pearls.

It is possible that the addition of pearls to a plate of oysters may increase the chances of an aphrodisiac effect. It remains for the individual wooer, however, to judge whether 'Darling, I've bought you some crap coated in solidified mucus' will actually win the day.

All in all, there is a remote possibility that a tureen of glistening molluscs will leave your intended gagging for it. Sadly, it's just as likely to leave them simply gagging.

1If you're thinking, 'neither; they're a means of paying for my Tube travel', you should probably try to get out of London more often.2That is, they have a hinged, two-part shell.3To be fair, this could be said about most foods that we now take for granted. Cartoonist Bill Watterson observed, through the character Calvin, 'Who was the guy who first looked at a cow and said, "I think I'll drink whatever comes out of these things when I squeeze 'em!"?'.4Depending on your gender and persuasions, this may be a far more diverting way to spend a few quiet moments than actually eating the oyster.5This didn't stop legendary lover Casanova, who reputedly ate 60 oysters per day.6Not kosher.7Which includes ospreys, owls, ferrets, moles and chameleons.