The Milky Way Galaxy Content from the guide to life, the universe and everything 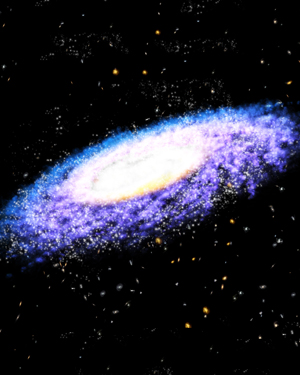 A still more glorious dawn awaits, not a sunrise, but a galaxy rise, a morning filled with 400 billion suns. The rising of the Milky Way.
– Cosmologist Carl Sagan (1934-96)

On any dark, clear night, well away from the glare of street lights, a stream of light can be seen stretching from horizon to horizon. What can be seen is an arm of the Milky Way1, our galaxy2. The Milky Way gets its name from the band of 'milky' light which ancient astronomers must have gazed at in wonder. Nowadays amateur astronomers can focus a telescope on the milky stream of light; even a low-magnification model will resolve too many stars to count.

We do not know what our galaxy looks like from the outside, but astronomers give their best guess that it is comparable to M109, a barred spiral galaxy in Ursa Major. There is a spectacular artist's impression of what the Milky Way may look like at the Astronomy Picture of the Day website.

The Milky Way is a barred3 spiral galaxy (type SBb or SBc) containing between two and four hundred billion stars. One of those stars is our own Sun, 26,000 light years4 from the galactic centre, which has a diameter of around 10,000 light years. Surrounding the central bulge is where some of the oldest stars group together as globular clusters. There are around 150 known globular clusters in orbit around the Milky Way.

Stretching out from the central bulge are four large spiral arms whose extremities bring the total size of the Milky Way to a diameter of about 100,000 light years. The spiral arms are rich in interstellar gas and dust, populated by hot blue young stars. This is what the next inner arm looks like from our vantage point, with a little help from long-exposure photography. The 'glow' behind the arm is the central bulge. Our Solar System is situated within a smaller arm called the Orion (or Local) Arm. A good way to teach children that we live in the Milky Way is to get them to write out their address as far as they can go: eg house number, street, town, county, postcode (or zipcode), country, continent, then show them they can go further than Earth – 'the Solar System', 'the Orion Arm', 'the Milky Way', 'the Universe'.

Other arms are named after the constellations5 which they appear to pass through:

Sagittarius A* - a Supermassive Black Hole

Black holes are difficult to comprehend; in effect they are gravitational fields, and nothing can escape them once caught, not even light. They are invisible due to the absence of light, but we can detect their presence when they are emitting blazar jets (feeding) and by the action of the surrounding matter. They were thought to exist (and indeed, featured in many a science-fiction story) before proof was found of their existence. Now it is thought that every galaxy has a black hole, and that black holes are imperative to the formation of galaxies.

There is a supermassive black hole, thought to be four million times more massive than the Sun, at the centre of the Milky Way, some 26,000 light years from our Solar System. Scientists have named it Sagittarius A* (pronounced A-star) due to its location (from our vantage point) in the constellation Sagittarius close to the border with Scorpius.

A dwarf galaxy in Sagittarius is slowly being absorbed into the Milky Way, as is the closest neighbouring irregular dwarf galaxy in Canis Major, which itself contains a billion stars. The enigmatic globular star cluster Omega Centauri may be what remains of a smaller galaxy which passed too close to the Milky Way many millions of years ago. It could not escape the gravitational pull of the larger galaxy and so began the galactic cannibalism. All that is left of the ensuing 'cosmic trainwreck' is a fabulous multi-coloured ball of stars differing in age and chemical make-up, and an intermediate-mass6 black hole.

The Fate of the Milky Way

If you look in the direction of the constellation Andromeda on any clear night, you should be able to make out a faint smudge. This 'little cloud' was known to the Persians in the 10th Century AD, and German astronomer and astrologer Simon Marius (1573 - 1624) observed it with a new invention called the telescope in 1612. English astronomer Edmond Halley classed it as a nebula in 1716, and French astronomer Charles Messier catalogued it as non-comet M31 in 1764. What none of these early astronomers knew then was that the faint smudge they were looking at was an entire galaxy, much like our own. It was in 1929 that the English astronomer Edwin Hubble published his own study of the Andromeda Galaxy, bestowing its correct description upon it for the first time in over 900 years.

The Andromeda Galaxy is the farthest object that we can see from Earth without using an optical aid. It is over two million light years away, which means it takes light about two million years to reach us from there. The bad news is that the Milky Way and the Andromeda Galaxy are on a collision course. When they begin to interact it will be a titanic clash on par with the spectacular colliding spiral galaxies known as Arp 271, which is probably a precursor of the fate of both the Milky Way and the Andromeda galaxies. The good news is that the galactic battle won't take place for billions of years, by which time the Earth will probably have been absorbed by the expanding Sun as it runs out of hydrogen at the end of its life, and there will be no-one left to witness the death of the Milky Way.

1The Latin name is Via Lactea, (Via = Way and Lac = Milk).2The Greek word for milk is galactos.3The bar is estimated to be 27,000 light years long and 5,000 light years wide.4A light year is the distance light travels in one year, roughly 5.88 trillion miles or 9.46 trillion km.5All of the constellations that we can see from Earth contain stars which belong to the Milky Way.6It is thought the black hole is still 42,000× our Sun's mass though!