The Andromeda Galaxy (Messier 31) Content from the guide to life, the universe and everything 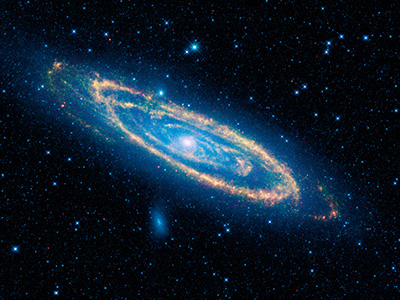 This entire globe, this star, not being subject to death, and dissolution and annihilation being impossible anywhere in Nature, from time to time renews itself by changing and altering all its parts. There is no absolute up or down, as Aristotle taught; no absolute position in space; but the position of a body is relative to that of other bodies. Everywhere there is incessant relative change in position throughout the Universe, and the observer is always at the centre of things.
–  Giordano Bruno: De la Causa, Principio, et Uno (On Cause, Principle, and Unity), 1584

If you look in the direction of the constellation Andromeda on any clear night, providing you're not affected by light pollution, you should be able to make out a faint smudge at Right Ascension +00h 42m Declination +41°. It's the furthest object you can see with the naked eye, being 2.5 million light years1 distant. This means that the light emanating from it has taken 2.5 million years to reach your eyes.

The Little Cloud that Became a Galaxy

The 'little cloud', as they described it, was known to the Persians in the 10th Century AD. German astronomer and astrologer Simon Marius (1573-1624) observed it with a new invention called the telescope in 1612. English astronomer Edmond Halley classed it as a nebula in 1716, and it became known as 'the Great Andromeda Nebula'. French astronomer Charles Messier catalogued it as non-comet M31 in 1764. English amateur astronomer Edwin Holmes (1838-1918) was photographing the Great Andromeda nebula in 1892 when he serendipitously captured a comet, later named Comet Holmes after him, in the foreground as well. What none of these early astronomers knew then was that what they were looking at was an entire galaxy, one much like our own. The debate about how other galaxies came to be accepted as such is examined in greater detail in its own Edited Entry. It was only when English astronomer Edwin Hubble published his own work on the Andromeda Galaxy in 1929 that the correct description of 'spiral galaxy' was bestowed upon it for the first time in over 900 years of astronomical study.

The renamed Andromeda Galaxy was first resolved into stars in 1944; it has an estimated one trillion stars, that's 1012 in case you were wondering. This makes it much bigger than the Milky Way Galaxy which contains between two and four hundred billion stars. If you began a journey from one edge of the Andromeda Galaxy to the other, it would take approximately 220,000 years at the speed of light to traverse.

The Andromeda Galaxy's angular diameter (apparent size) is 190'×60' – from our vantage point it shines at +3.4 magnitude. If it was brighter it would dominate the night sky, and appear about six times the size of the full moon. The small grey blob we see in Andromeda with the naked eye is just the brightest part of the galaxy, the core. You'd need an optical aid like a telescope to see more.

Scientists know of one supermassive black hole at the galaxy's core, and one microquasar (a radio emitting X-ray binary system) which could also house a black hole. These strange objects are invisible due to the absence of light, but we can detect their presence when these gravitational beasts are feeding on surrounding matter. Not a lot is known about them, but it is thought that every galaxy has a black hole at its core, and that black holes are imperative to the formation of galaxies.

The Andromeda Galaxy has several hundred globular clusters, which are dense clumps of aged stars. Some have been dated to five billion years old! One, catalogued Mayall II, is gigantic and rivals our own Omega Centauri in the luminosity stakes. Some astronomers think Mayall II may be the leftover portion from a previous galactic meal2, aeons ago.

From our vantage point, the brightest star cloud in the Andromeda Galaxy is NGC 206. Located within a spiral arm, NGC 206 contains several Cepheid variables, a special type of star which astronomers can study to determine distance.

Here are some amazing views of the Andromeda Galaxy and other features:

There is more detail in the non-visible spectrum:

The Andromeda Galaxy in Popular Culture

Science fiction writers have mostly preferred to refer to the Andromeda Galaxy using its original name of 'Great Nebula in Andromeda' or 'Great Spiral Nebula in Andromeda'. Such authors include Jack Vance, Ivan Yefremov and Star Trek creator Gene Roddenberry. Andromeda, originally titled Gene Roddenberry's Andromeda, was a television show which ran for five seasons between 2000 and 2005. The premise was the Commonwealth comprising three galaxies, Andromeda, Triangulum and the Milky Way, accessible to each other via slipstream6, and all the space-faring alien races which inhabit them. The star of the show, hero Captain Dylan Hunt, was portrayed by Kevin Sorbo, who was fresh from playing Hercules in Hercules: The Legendary Journeys (1995-99).

The Andromeda Galaxy has appeared on a 1999 German postage stamp and on one stamp issued in a set of astronomical wonders, face value 49c, by the USA. Others in this set include the magnificent barred spiral NGC 1300 in the constellation Eridanus and the Crab Nebula in Taurus.

The Andromeda Galaxy and the Milky Way are on a collision course. When they begin to interact it will be a titanic clash on a par with the spectacular colliding spiral galaxies known as Arp 271. The pair will perform a gravitational dance which will last many millions of years; eventually they will merge into one ginormous elliptical galaxy - pre-emptively named 'Milkomeda'. The good news is that the galactic merger won't take place for billions of years, by which time the Earth will have been absorbed by the expanding Sun as it runs out of hydrogen at the end of its life. So there will be no humans left to witness the end of the Andromeda Galaxy, unless of course they have learned to live in outer space or found somewhere else to live.

1A light year is the distance light travels in one year, roughly 5.88 trillion miles or 9.46 trillion km.2When galaxies collide, one larger one can end up cannibalising another.3The New General Catalogue was compiled by John Louis Emil Dreyer (the director of the Armagh Observatory from 1882 to 1916). Since the NGC was created, improved detection methods have uncovered other wondrous sights which are registered in the IC (Index Catalogue) and the Sh (the Sharpless Catalogue).4The Caldwell Catalogue was compiled by English astronomer and TV presenter Sir Patrick Moore, the host of the BBC's The Sky At Night until his death in 2012. His intention was to create a list to challenge the 'backyard astronomer' – keen amateurs like himself.5Galaxy Evolution Explorer.6Wormholes in space which allow faster-than-light speed travel.