Globular and Open Star Clusters Content from the guide to life, the universe and everything 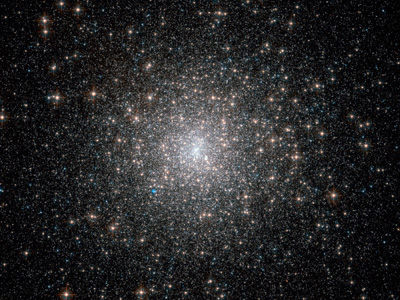 Star clusters are some of the most impressive objects in the night sky. There are two main types of cluster, which are quite different from each other: the globular cluster and the open cluster.

Globular clusters are some of the oldest structures in galaxies. These stellar antiques consist of thousands, sometimes millions of stars in a relatively small volume.

The stars in globular clusters are, for the most part, low mass and quite faint. These sun-sized or smaller dwarf stars are joined by the red giants that used to be sun-sized stars in the dim and distant past. Stars in globular clusters do not contain much metal1, so they would have been amongst the first generation of stars to have formed. We call these Population II stars2.

There is very little, if any, dust and gas floating around globular clusters, so there is no new star formation. Astrophysicists believe that because globular clusters float outside the disk of their parent galaxy3, the gravity is weaker in a cluster than in the main body of a galaxy. This means that when the live fast, die young supergiants went supernova in the early life of a globular cluster, the gases and remnants of the star were blown clear out of the cluster, the shockwaves carrying all the other dust and gas out of system as well, spreading it thinly across the galactic halo.

Our Sun is a relative loner in space, having no known star within one parsec4. At the centre of a globular cluster there can be in the region of 100 to 1,000 stars per cubic parsec. Because of the closeness between the stars, it is unlikely that globular clusters would be a good place to look for planets with life. The complex gravitational interactions mean that planets may not be able to exist in a stable orbit for more a hundred million years or so, probably not enough time for intelligent life to develop5.

While most of the stars are dull and red, there are some bright blue stars found in globular clusters that really look out of place. These are larger and hotter than their companions. Normally, the hotter and brighter a star is, the shorter it lives. Since the stars in globular clusters were all formed at the same time, the bright blue stars should have been the first to die off, so these stars must have some other origin. Theories of them having been born in the clusters or have been captured by them have been ruled out by astrophysicists. These so-called Blue Stragglers6 are thought to have occurred in one of two ways. The first is by two stars, possibly binaries, bumping into each other and forming a new, much hotter star. With the complex gravitational interactions and huge density of stars, this phenomenon of star interaction is much more likely to happen in a globular cluster than anywhere else. The other theory is that Blue Stragglers are formed by one star capturing material from a close companion. There is evidence to support both these explanations.

Astronomers have found massive black holes at the centres of some globular clusters, giving weight to the theory that they used to be the cores of dwarf galaxies. The rest of the galaxy would have been consumed by a larger galaxy. There are at least 200 globular clusters that orbit the core of the Milky Way. The most famous globular cluster arguably is Omega Centauri, which contains several million stars and, from Earth, looks as large as the full Moon. 47 Tucanae is the second brightest7 globular cluster in the sky and is over 120 light years across. The cluster is around 20,000 light years away and it puzzles astronomers because there are fewer than expected binary stars in the central region.

Open clusters are pretty much the exact opposite of globular clusters. They consist of a few thousand or so new stars within the first few million years of their lives. They are often dominated by the light of huge, young, blue stars. Open clusters are some of the most beautiful objects in the night sky.

They occur in areas of star formation, normally a collapsing giant molecular cloud, where a large group of stars forms at the same time. The gravity of these stars holds them together in a loose association for a while before the stars either burn out (if they are large) or wander off to find their own way in the universe.

The powerful UV radiation from the stars will ionise most of the gas in and around the cluster. A combination of stellar winds and supernovae that inevitably happen within a few million years removes the majority of the rest of the gas, along with a few of the stars. Most open clusters do not last very long at all. Once the gases have been blasted away, many do not have the mass to hold the stars together. Often the lifetime of an open cluster is a few million years as the escape velocity is less than the average velocity of the stars. In many of those that survive the gas expulsion, the interactions between the stars may accelerate individual stars to a velocity that means they can escape the cluster's gravity.

Because open clusters tend to break apart before their stars die, they are dominated by the light of the blue stars. In some older open clusters, where the blue stars have died, yellow stars dominate the clusters. Longer-lasting open clusters may pass close to massive objects like molecular clouds, whose gravity will leave an open cluster as just a long string of stars.

Many of the bright stars in Ursa Major are former members of the same open cluster. They are carrying on their journey though the galaxy in roughly the same direction, and are called a Stellar Association. 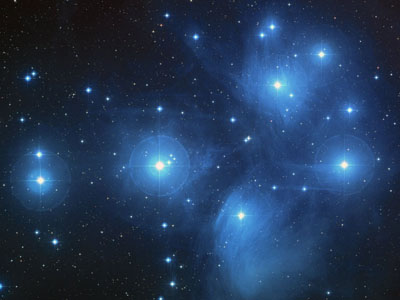 The most famous open cluster is the Pleiades, or Seven Sisters. It lies around 440 light years away and despite its name contains over 1,000 stars. The brightest of these are the 14 or so bright blue stars visible to the naked eye. It also contains a vast number of brown dwarf failed stars. Because the Pleiades cluster is travelling though an interstellar dust cloud, there is a faint reflection nebula surrounding the stars which looks like a blue glow around the group. The Spitzer Infrared Telescope and the Hubble Space Telescope have taken spectacular images of the region in IR (infrared) and the visible spectrum. The Pleiades are only around 75 to 150 million years old.

In Greek Mythology, the half-sisters of the Pleiades, also daughters of the Titan Atlas, were the Hyades. In the night sky these consist of a few hundred stars, and are the closest open cluster to Earth, being only 151 light years away, near Aldebaran in the constellation of Taurus.

The Orion Trapezium Cluster lies in the middle of the famous Orion Nebula (also known as Messier 42). The stars from the cluster provide much of the light that illuminates the nebula.

Because open clusters are young, the brown dwarf stars in them have not had a chance to cool down after formation, so they provide a valuable resource to astronomers who cannot find older, much fainter, brown dwarfs with current technology. Brown dwarfs are between Jupiter and a red dwarf star in size. They are not massive enough to be able to generate the temperatures in their core to ignite nuclear fusion, hence are destined to never become a pin prick of light in the sky. However, because they are still warm from their formation, brown dwarfs in open clusters give off infrared radiation which can be studied.

Image of Globular Clusters provided by NASA. Image of the Pleiades provided by NASA and STScI. It is requested by STScI that in any subsequent use of this work NASA and STScI be given appropriate acknowledgement.
1Astronomers and astrophysicists call any element heavier than Helium a metal.2Confusingly, we call the newer, brighter stars Population I stars.3The disk of the galaxy (the pretty bit with all the swirly star patterns) is only the most visible part of a galaxy; the disk is surrounded by a halo of much fainter objects.4A parsec is an astronomical measure of distance, being about 3.3 light years or 31 million million kilometres.5The Earth has been in a stable orbit for a thousand million years and it is arguable that intelligent life has yet to develop here.6They are called stragglers because they should have evolved away from the main sequence and into stellar retirement, but are straggling behind.7As seen from Earth.