Constellations: Tucana 'the Toucan' Content from the guide to life, the universe and everything 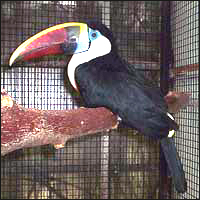 Tucana is a small to medium-sized southern constellation. Its southerly position means that it is not fully visible at latitudes further north than about 15°N, so it is best observed from the Southern Hemisphere. It is surrounded by Phoenix and Grus to the north, Indus to the west, Octans to the south, and Hydrus to the east. The constellation is rather faint, the brightest star being 3rd magnitude and with no other stars brighter than 4th magnitude. It has no Messier objects because Messier, operating from France, could not see this part of the sky. However, there are two major items of interest: the globular cluster 47 Tucanae, and the Small Magellanic Cloud, a small galaxy which is thought to be orbiting our Milky Way galaxy. Tucana has no known meteor showers.

Tucana is not visible from Europe or the Middle East due to its southerly location, so it was never seen by the ancient Greeks and Babylonians, who devised the ancient constellations. As a result, it has no mythological associations.

In the 16th Century, explorers started to map the southern part of the Earth's globe, and others charted the skies above these lands. New constellations were devised to fill in the southern sky. This process continued into the 17th and 18th Centuries. The explorers Pieter Dirkszoon Keyser and Frederick de Houtman created a number of southern constellations and many of them were named after the exotic creatures they had seen on their travels, such as the flying fish, the bird of paradise and the chameleon. The toucan is a colourful South American bird with an abnormally large beak. Keyser and de Houtman pictured it in the sky with a twig in its beak.

Tucana has a number of multiple stars. Most notable is beta Tucanae. Naked eye observers should be able to see two stars very close together. Telescopes will show that one of these is in fact itself a double star with two components close together. These three stars are known as beta1, beta2 and beta3. Even more detailed examination with very large telescopes shows that each of the three is itself a double star.

Kappa Tucanae is also a multiple star. Small telescopes will see a binary star. Larger telescopes reveal that each component is itself a binary.

Lambda Tucanae is an optical double - that is, two stars which appear close together from our viewpoint, but are in fact far apart in space. The two stars are known as lambda1 and lambda2. Lambda1 is itself a true binary star, with two components in orbit around each other.

Our galaxy is known as the Milky Way, and is one of a group of galaxies of all shapes and sizes known as the Local4 Group. The group contains three large spiral galaxies (our own galaxy is second in size) and about 30 other smaller galaxies.

The Small Magellanic Cloud is the fifth in size in the group. It is a dwarf galaxy, only a few percent of the size of ours, but still with a respectable several hundred million stars. It is in orbit around the Milky Way at a distance of about 210,000 light years from us. This means that it is smaller and further away than the other major galaxy in this region, the Large Magellanic Cloud in Dorado. Both Clouds are easily visible to the naked eye, looking like detached portions of the Milky Way.

The Small Magellanic Cloud is sometimes known by the name NGC 292, although strictly this name refers only to the bright central portion of the galaxy.

The Magellanic Clouds first came to the notice of western astronomers when Ferdinand Magellan came back from his travels in 1519, so they are named after him.

NGC and Other Deep Space Objects

The New General Catalogue (NGC) is a list of interesting deep-space objects (that is, objects outside our solar system). It was compiled by Dreyer at Armagh Observatory based on the observations of Sir William Herschel. There are many interesting objects in Tucana; some are in our galaxy while others are in the Small Magellanic Cloud.

Cepheid Variables and the Measurement of Distance

In 1908, the American astronomer Henrietta Swan Leavitt (1868 - 1921), working at the Harvard College Observatory, did a detailed study of photographs of the Small Magellanic Cloud which had been taken at Arequipa, Peru, using the 10-inch 'Metcalf' refractor telescope. She identified 25 stars of the type known as Cepheid variables, named after the prototype star delta Cephei. These are stars whose brightness varies in a regular fashion over a few days. They get sharply brighter, then fade slowly away, only to repeat the pattern exactly after a few days. It is now thought that the variation in brightness is caused by an increase in the volume of the star, which collapses after a few days back to its original size.

Some stars are bright because they are close to us, while others are bright because they are actually very luminous but are far away. Astronomers talk about the apparent magnitude, which is how bright the star appears from Earth, and the absolute magnitude, which is how bright the star really is (if you could get close to it). We can easily measure the apparent magnitude, but normally to calculate the absolute magnitude we need to know the distance of the star. Leavitt's work turned this on its head.

Leavitt measured the period of variation of each of the Cepheid variables. By assuming that the Cloud is very far away, she was able to treat all the stars as being the same distance from us (in the same way that Dublin and London can both be considered the same distance from, say, Malaysia). This meant that she could work out the relative values of their absolute magnitudes. If one of these stars appeared to be twice as bright as another to us observing from thousands of light years away, then its absolute magnitude was actually twice as bright. She discovered that the brighter the star in absolute terms, the longer was the period of its variability, and the two values were connected by a mathematical relationship. Over the next four years she refined her theories and published her findings in 1912.

These results led to a method of calculating the distance of such stars: knowing the period of variation of a star, the absolute magnitude can be calculated. Relating this to the apparent (observed) magnitude allows the distance of the star from us to be calculated. This method is one of the most useful for measuring the distances of remote clusters or galaxies - just find a Cepheid variable within the group, and you can calculate how far away it is. The Cepheid variable method is now the standard 'yardstick' for measuring distances within the Local Group of galaxies. For galaxies further away, it is usually impossible to identify individual stars, making this method impractical.

The Small Magellanic Cloud is a dwarf galaxy, but it is not the only one in Tucana. Discovered in 1990, the Tucana Dwarf Galaxy is positioned about 99 arcminutes to the WNW of the star delta Tucanae. It is very faint, but is believed to be a previously unknown member of the Local Group of galaxies.

Extrasolar planets are ones outside our solar system, orbiting other stars. They are a hot topic for astronomers, with new ones being discovered all the time. Because the distances involved are so huge, the planets have to be detected by indirect means, such as by analysing the effect their gravity has on the parent star.

There are four known extrasolar planets in Tucana:

Astronomers would like to find an Earth-like planet in the 'habitable zone', at the right distance from the parent star for Earth-like life to be possible5. The first of these planets appears to be too hot, and the second too big, for life as we know it to exist.

1Current IAU guidelines use a plus sign (+) for northern constellations and a minus sign (−) for southern ones.2Magnitudes taken from the Bright Star Catalogue, 5th Revised Ed (Preliminary Version).3A light year is the distance light travels in one year, roughly 10,000,000,000,000 kilometres.4Local, in this context, means within a couple of million light years!5Of course, other forms of life may be possible at completely different temperatures, but we don't really know what to look for.