Constellations: Lupus 'the Wolf' Content from the guide to life, the universe and everything 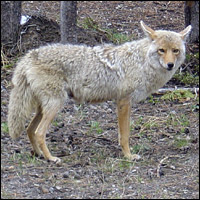 The wolf snarled and sprang toward them with a great leap.
- JRR Tolkien, The Lord of the Rings

This constellation borders Scorpius, Centaurus, Norma, Libra and Circinus. It reaches its highest position in the sky on 20 June (which in the Southern Hemisphere would be the first day of winter2.)

Until 200 BC, when Hipparchus separated it out, the constellations Ara, Norma, Lupus and Centaurus were all one constellation. Originally, Lupus was the asterism Therium 'the wild animal,' within the constellation Centaurus. This tableau had a centaur sacrificing a wild animal on an altar. Ptolemy specified that animal was a wolf. Norma is a modern constellation, and at that time was part of the sacrificial altar.

An early version of this star grouping, noting that the centaur was a savage hunter, showed a centaur with a freshly-killed wild animal on a skewer preparing to make an offering to Dionysus, the god of wine. Dionysus was a deity who the centaurs would worship, because they were reputed to be heavy drinkers. It is even reported that at one time the centaurs were invited to the wedding of King Peiritous of the Lapiths. At the celebration they became intoxicated and acted like wild animals. This resulted in their being removed forcefully; which in turn caused a war between the king whose wedding they had defiled, and the neighbouring centaurs.

The scientific star names are simple to understand (if you know your Greek alphabet). For example: the 'alpha' star means that it is the brightest star in that constellation. Combined with the genitive of the constellation, this is known as the 'Bayer designation'. The next brightest is designated 'beta', etc. This is not always strictly adhered to as sometimes errors are made during cataloguing or the star brightness fluctuates.

The New General Catalogue, by J Dreyer, was published by the Royal Astronomical Society in the late 19th Century. It was expanded to include two Index Catalogues (IC). This list of star clusters, nebulae and galaxies was revised again in 1973 and is continually updated by the NGCIC/IC Project.

In 2005, a telescope in the Chilean Andes equipped with adaptive optics took a photograph of an 11th magnitude star with a clearly discernible planet. GQ Lupi b, with an approximate mass of 21.5 Jovian units and a radius 1.8 times that of Jupiter, orbits its parent star at 103 AU.

Lupus-TR-3 b was detected by the transit method in 2007. It is classified a 'hot Jupiter' due to its extreme closeness to its parent star – it takes less than four Earth days to complete an orbit around Lupus-TR-3.

HIP 70849 b was announced in the bumper crop of 19 October, 2009. It's a superjovian orbiting its orange dwarf parent star at a far distance – it takes 3,000 Earth days to complete one orbit.

The star Nu2 Lupi had three planets detected in orbit around it in 2011. They are all super-Earths in close proximity to their star.

WASP-132 b is a 'hot gas giant' which orbits its star in just over seven days.

Wolves in Other Mythology

It has long been reputed that a she wolf suckled Romulus and Remus, the founders of Rome. However, in many stories the wolf is portrayed as evil. People speak of 'a wolf in sheep's clothing'. There is the Chinese tale of a man who freed a wolf from a sack, and almost ended up being eaten by the wolf.

Then there is this strange tale: The Salish of the Pacific Northwest tell of a wolf who fell madly in love with a toad. He prayed to the Moon for a bright light. The Moon came closer and shone brightly. The wolf chased the little toad, and just as he was about to catch her, the toad made one wild and desperate jump up and landed on the moon, where she stayed and the wolf never saw her again; and ever since you will hear wolves howling at the moon.

1Current IAU guidelines use a plus sign (+) for northern constellations and a minus sign (−) for southern ones.2The solstice (the days on which the sun's rays reach their northernmost limit). 3A light year is the distance light travels in one year, roughly 5.88 trillion miles or 9.46 trillion kms.