Constellations: Lynx 'the Wildcat' Content from the guide to life, the universe and everything 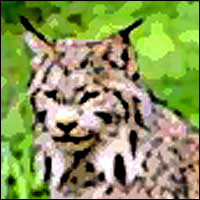 When your father used to go to the mountain, he would bring back a roebuck, a wild pig, a stag, a speckled grouse from the mountain, a fish from the waterfall of Derwennyd. Whatever your father would hit with his spit, whether wild pig or lynx or fox, nothing that was without wings would escape.
–  Welsh poet Aneirin Dinogad (extract from 'Pais Dinogad' in the Book of Aneirin), 6th Century AD, translated from the originally written Cumbric1.

Lynx is a faint northern constellation bordered by Camelopardalis, Auriga, Gemini, Cancer, Leo Minor and Ursa Major. It was created by Johannes Hevelius (1611 - 1687) to 'fill the gap' between the more notable Ursa Major and Auriga, and he called it 'Lynx or Tiger'. Even by the furthest stretch of the imagination it's hard to visualize a leaping wildcat from joining the stars, so Hevelius most likely named this constellation as one for people who have keen-eyesight like a cat.

Lynx and six other Hevelius-invented star patterns3 were all introduced in his 1690 atlas Firmamentum Sobiescianum, which was published posthumously by his second wife Elisabeth, 'the Star Huntress', who was arguably the first female astronomer.

By the 19th Century there were over 100 constellations in existence, honouring some unusual objects that were in vogue at the time. In 1922, the International Astronomical Union (IAU) eliminated some but retained Lynx in the 88 internationally recognised today. In 1930, the IAU formed official 'borders' between each constellation, entrusting the task to Belgian astronomer Eugène Delporte. The constellations were divided by straight lines (called Right Ascension and Declination) and this much-easier system is what we use today. However, the 'tidying up' meant that some stars ended up in neighbouring constellations, eg psi10 Aurigae became 16 Lyncis. Confusingly some stars were not redesignated, hence we end up with some anomalies, as discussed below.

There is only one Bayer designated star in Lynx, the 'alpha' star. Most of the rest have Flamsteed numbers, that is a number plus the genitive of the constellation like 38 Lyncis: this system was introduced by the first Astronomer Royal, John Flamsteed. More recently discovered variable stars are known by English capital letters plus genitive, eg UW Lyncis.

The luminary of this star grouping is the alpha-designated orange giant Al Fahd4, but registering only a +3.13 magnitude it sets the tone for the whole constellation.

14 Lyncis is a binary system comprising a yellow giant and a white dwarf companion.

10 Ursae Majoris used to be part of Ursa Major before the IAU fixed the borders, but, confusingly, the star name was never changed. So, quizmasters, this anomaly makes a good quiz question:

Q: Where is the star 10 Ursae Majoris located?
A: The constellation 'Lynx'.

Unusually for a globular cluster, NGC 2419 has a name: The Intergalactic Wanderer. It was discovered by Sir William Herschel in December 1788, and at 295,000 light years distant, it is one of the most remote objects of our galaxy, possibly even extragalactic. It is heading in our direction though, at a speed of 20km/sec. Sir Patrick Moore listed it in his challenge for backyard astronomers catalogue as Caldwell 25.

NGC 2770 is a spiral galaxy that has produced three recent supernovae: SN1999eh (which is no longer visible); SN2007uy and SN2008D/XRF080109 (which are still visible). The code XRF part of the most recent supernova stands for X-ray flash, the figures are the date it was registered, 9 January, 2008.

NGC 2782 is a distorted spiral with an active nucleus. Images show it is reforming its shape (due to gravitational rotation) post-collision. It will probably end up as an elliptically-shaped galaxy.

NGC 2683 is an edge-on spiral galaxy with such a distinctive look that eager viewers the Astronaut Memorial Planetarium and Observatory dubbed it The UFO Galaxy.

The Headphone Nebula, designated Jones-Emberson 1 after its discoverers, was detected in 1939. It lies at a distance of approximately 1600 light years from us, and at 16th magnitude you'd need a decent telescope to view it.

The Lynx Arc is a star-forming region over 11 billion light years distant, one of the furthest astronomers have been able to see so far. We can only view it because the light from it is magnified by a galaxy cluster along the same line of sight, this is known as gravitational lensing. This kind of thing was predicted by Albert Einstein in 1936, some 70 years before the Lynx Arc was discovered. An amazing gravitational lens produced this image which honours the genius: Einstein Cross.

Extrasolar planets are worlds which orbit stars outside our own Solar System. Figures given in the table below are the length of the planet's orbital period around its parent star, which we know of as a year. The mass of the extrasolar planet is compared to that of Jupiter, our Solar System's largest planet, known by astronomers as the 'Jovian scale'.

HD 75898 is a yellow sub-giant, much more massive than our own Sun. Its planet HD 75898 b is a gas giant which orbits at 0.737AU (astronomical units). The planets XO-2 b, XO-4 b and XO-5 b all orbit their stars in just a few days, and the immense solar radiation and intense heat can immediately dismiss any probability of life.

The orange dwarf star 6 Lyncis has a gas giant planet in attendance at approximately 2.2AU, which, if it were in our Solar System, would place 6 Lyncis b beyond the orbit of Mars, in the middle of the asteroid belt. Even if 6 Lyncis b had a rocky moon with enough gravity to retain an atmosphere, the remoteness makes it too cold for life as we know it to exist.

Conclusion: the abundance of extrasolar planets in this constellation brings us no closer to finding a warm terrestrial world similar to Earth.

The lynx used to roam the British Isles in areas like North Yorkshire, the Lake District and possibly as far north as the Scottish Highlands, up to 1,500 years ago. Unearthed bones from lynxes have been carbon dated to between the 3rd and 6th centuries. The wild feline thrived on a diet of roe deer. Researchers think the British lynx became extinct due to several factors including declining deer populations, deforestation and human activity. We don't know what the British lynx looked like because it died out so long ago, but it's possible it was a close relative of the Eurasian lynx (Lynx lynx) or the Canadian lynx (Lynx americanus). Although still surviving, the Canadian lynx is currently 'low risk' on the Red List of Endangered Species (2007). However, excessive deforestation and the trapping by man of their main prey the Snowshoe hare Lepus americanus (for its fur to satisfy the demands of the fashion industry) continues to raise concern.

Lynx is a text-only Internet browser – much faster than conventional browsers which display graphics. If you want to see what your favourite webpage looks like on a Lynx browser, then type the URL into this page.

Lynx is a brand name for a men's bodyspray, the adverts for which seem to imply that usage of the product makes the wearer more attractive to women. However, don't be conned into parting with hard-earned cash because the ruse doesn't improve your pulling power. Most women prefer clean, just-shaved men because then they can smell the natural testosterone, which is a powerful aphrodisiac.

1A language related to Welsh that was once widely spoken in Northern England.2Current IAU guidelines use a plus sign (+) for northern constellations and a minus sign (−) for southern ones.3Canes Venatici, Lacerta, Leo Minor, Scutum, Sextans and Vulpecula.4Variations include Elvashak and Alvashak, which all mean 'the wildcat'.5A light year is the distance light travels in one year, roughly 5.88 trillion miles or 9.46 trillion km.