Constellations: Scorpius 'the Scorpion' Content from the guide to life, the universe and everything 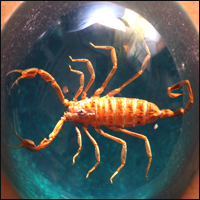 Then Day and Night weigh'd in Libra's scales,
Equal awhile, at last the Night prevails,
And longer grown the heavier scale inclines
And draws bright Scorpius from the Winter signs.
– Manilius: Now Constellations

The constellation  Scorpius is one of the oldest-recognised shapes of stars, that of a scorpion's body and tail. Scorpions are the most primitive of arachnids, barely changed since the Silurian Period (438-408 million years ago).

However, not everyone knows it as the outline of a scorpion; the Chinese view it as a dragon. Scorpius is prominent in southern skies during the autumn/winter months. It is bordered by (clockwise, from top) Ophiuchus, Libra, Lupus, Norma, Ara, Corona Australis and Sagittarius. Scorpius boasts four Messier objects, numerous clusters and nebulae, a black hole binary system, and five stars with confirmed extrasolar planets.

The Sun appears to pass through Scorpius from our vantage point, making it (as 'Scorpio') a member of the zodiac (see 'The Zodiac' section below).

According to Ancient Greek legend, Orion (the Hunter) boasted that he could kill any of the animals of the Earth because he was so skilled at tracking and a fearsome warrior to boot. This so alarmed the goddess of the Earth, Gaia, that she sent a giant scorpion to do battle with Orion. During this fight, the scorpion managed to sting Orion on his leg, inflicting a deadly wound. Asclepius2, the demigod of healing, used his knowledge and skill to revive the fallen Orion. The gods could not allow this, so Asclepius was killed by Zeus. The rest of the Greek gods were so entertained by the events that they decided all of the players should be honoured with their own constellations. Asclepius was placed between Serpens, and he became known as Ophiuchus, the serpent bearer, because Asclepius had learned his healing skills from watching snake behaviour. Orion and Scorpius were placed on opposing sides of the celestial sphere so there could never be a repeat of the titanic battle. The bright star Rigel (beta Orionis) marks the place where the scorpion inflicted its venomous sting upon Orion.

The scientific star names are simple to understand (if you know your Greek alphabet). For example: the 'alpha' star means that it is the brightest star in that constellation. Combined with the genitive name, this is known as the 'Bayer designation'. Some stars have proper names as well; for example, alpha Scorpii is Antares. Others are known by their catalogue number.

Antares (alpha Scorpii) is a red supergiant of the first magnitude. In comparison to our Sun, Antares is 400 times larger and ten thousand times brighter. The Romans knew this star as Cor Scorpionis  'the heart of the scorpion'. Antares literally means 'rival of Mars' and indeed, they appear very similar to us. Due to its position on the ecliptic (the apparent path of the sun across the sky) Antares can be occulted (covered) by the moon and (very rarely) the planets of our solar system. During one such occultation by our moon on 13 April, 1819, a companion star Antares B was discovered. Antares is one of the four 'Royal Stars' in Mesopotamian culture, the others being Aldebaran (alpha Tauri), Regulus (alpha Leonis) and Fomalhaut (alpha Piscis Austrini).

The star designated gamma Scorpii was reclassified as sigma Librae in the 19th Century.

Lambda Scorpii Shaula (literally meaning 'the raised tail') is a multiple star system comprising three components: lambda Scorpii A, B and C; however with more powerful optical aides it is possible to see that lambda Scorpii A is a triple system itself. Shaula shines +1.6, the 25th-brightest star overall.

Nu Scorpii is a multiple star system which lights the very fine dust of Reflection nebula IC 4592, causing it to shine bright blue.

Due to its similarity to our own Sun, the unnamed 18 Scorpii features highly on the list of stars called the Catalogue of Nearby Habitable Stellar Systems (HabCat) which are being analysed by a team of researchers at the University of Arizona as part of the ongoing search for habitable extrasolar planets.

GRO J1655-40 is a binary star system with a difference! There's a main sequence star approximately double the mass of our Sun, then there's its rather aggressive companion, a black hole! The Astronomy Picture of the Day website published an artist's impression of the unusual partnership for our better understanding of the mechanics of the system.

IC 4628 is an emission nebula approximately 250 light years across. More commonly known as the Prawn Nebula, it lies over 6,000 light years away.

NGC 6475 (M7) is a 200 million year old open cluster which spans 25 light years. It contains over 100 stars and is quite prominent. This open cluster was known to Ptolemy in 130 AD and has been named Ptolemy's Cluster in his honour.

NGC 6334 is a red emission nebula better known as the Cat's Paw Nebula. If you look closely, you'll see why!

NGC 6302 is a planetary nebula called the Butterfly Nebula. It has also been called 'Barnard', but it's the insect moniker that stuck. Its central dying star is thought to have a surface temperature of a quarter of a million degrees centigrade. The rate of gas ejection is 400km per second!

NGC 6388 is a globular cluster which was discovered in 1826 by Scottish astronomer James Dunlop (1793 - 1848) when he was working in Parramatta, New South Wales, Australia.

The space debris which creates a meteor shower comes from the tail of a comet, as the Earth crosses where the comet passed previously on its own orbit. Imagine a trail of breadcrumbs, or sawdust like that used in hashing.

There are three meteor showers associated with this constellation, none of them are very prominent.

There have been many extrasolar planetary systems found in the constellation Scorpius. Figures given in the table below are the length of the planet's orbital period around its parent star, which we know of as a year. The mass of the extrasolar planet is compared to that of Jupiter, our Solar System's largest planet, known by astronomers as the 'Jovian scale'.

HD 147513 is a yellow main sequence star which lies 42 light years distant. In 2002 a planet in orbit around it was discovered by the radial velocity method. HD 147513 b is a gas giant with an orbit so eccentric the surface temperature ranges must be extreme.

NGC 6121 contains a pulsar, PSR B1620-26 which has a white dwarf companion star, B1620-26B. A third object was discovered in 1993, but with its mass being so low it was obviously a planet, not another star. B1620-26 b is its official designation, but this has flown in the face of the previous nomenclature, with some researchers believing it should be described as B1620-26AB b due to the fact that the planet orbits both stars. Because it is the oldest-known extrasolar planet discovered so far, the whole system is over 12 billion years of age, it has been affectionately nicknamed 'Methuselah' after the Biblical character. At 12,400 light years distant, it's also the furthest away. An interesting graphical explanation of the planet's remarkable history has been drawn up by Space.com.

WASP-17 b was discovered in 2009 and a remarkable feature is its orbit, which is the opposite direction to the spin of its star. The planet is a gas giant, half the mass of Jupiter but twice its size.

Red dwarf GJ 667 C, also known as Gliese 667 C, is a member of a triple star system just 22 light years from our Sun. It has at least five planets, all of which are terrestrial worlds. Three of the confirmed discoveries lie within that system's habitable zone.

The constellation Scorpius is a member of the zodiac; one of the 13 which the Sun appears to pass through over the course of a year. Yes, 13. When the IAU redrew the constellation borders it was found there were 13 constellations that the Sun was passing though. Precession (the wobble of the Earth upon its axis) has shifted the timings somewhat, moving the points at which the equinoxes occur to a different place, and point to other north/south pole stars. Rather than upset astrologers by asking them to change their dates for their horoscopes to bring them into line, astrological predictions have carried on as before, with no discernible difference.

They probably wouldn't want to recognise 13 zodiacal constellations anyway, as some people deem that an unlucky number. Western astrologers like to profess that the Sun passes through the sign of the scorpion between 24 October and 22 November, and assign certain traits to the people born between these dates. Astronomers could tell you that the Sun passes through Scorpius so quickly you'd barely notice, as it's just a week: 23 November to 30 November give or take a day depending upon whether the year is 'leap' or not.

As the zodiac has already been mentioned, it's reasonable to include some famous people who consider themselves born under the star sign Scorpio:

What About Elvis, you say?

In addition to Western astrology, there's also Vedic astrology, which calculates possibilities from the position of the heavenly bodies at birth and the length of time of each dasha (the Sun = 6 years; Venus = 20 years, etc) can calculate life-changing events. Take Elvis Presley, for instance, his dashas and bhuktis (sub-dashas) clearly mark all the important events of his life including his fabulous voice and magnetic personality. With the Vedic Scorpio Ascendant for Elvis falling within the house of sex appeal, he was always going to charm the birds off the trees even if he'd ended up a roadsweeper.

1Current IAU guidelines use a plus sign (+) for northern constellations and a minus sign (−) for southern ones.2Various other spellings include Aesculapius and Asklepios.3A light year is the distance light travels in one year, roughly 5.88 trillion miles or 9.46 trillion km.4Diana and Camilla.