The Football Career of Diego Maradona Content from the guide to life, the universe and everything 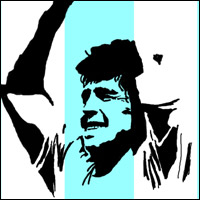 From humble beginnings, Diego Armando Maradona rose to become one of the most famous footballers in the world. One of the most talented1 players ever, he is also considered the most infamous, certainly in English eyes, thanks to his punched 'Hand of God' goal.

Maradona was born on 30 October, 1960, the fifth child of eight to Diego Maradona and Dalma Salvadora Franco, in Lanus, on the edge of Buenos Aires, Argentina. He started his playing career with Los Cebollitas (The Little Onions), the youth team of Argentinos Juniors, at the tender age of just ten. A few days short of his 16th birthday, he made his professional debut, coming on as substitute for Argentinos Juniors during the second half. His first goal soon followed on 14 November, 1976 against San Lorenzo de Mar del Plata, and Maradona had arrived.

His skills were all too evident and he was called up for the national squad of Argentina in early 1977. He made his international debut on 27 February against Hungary. With the World Cup fast approaching there was a large clamour for the 17-year-old Maradona to be included in the squad, for the tournament that was to be held on home territory. The press and the nation were to be disappointed as the Argentinian coach, Cesar Menotti, would not include him in his squad of 22, stating that he thought Maradona was too young to handle the pressure, so the world would have to wait.

Maradona's ascending career in South American football continued; he scored his first international goal on 2 June, 1979, in Glasgow against Scotland. He also led Argentina to the World Youth Championship in Japan, beating the USSR side 3-1 in the final. It was then, after four years with Argentinos Juniors, that he moved to Boca Juniors - one of Argentina's bigger clubs, for a transfer fee of £1 million (a world record). His debut for Boca Juniors on 22 February, 1981 saw him score twice in a 4-1 victory over Talleres de Cordoba. Maradona's talents helped Boca Juniors win the Argentine Championship that season, and already European eyes were watching the Mercury-heeled wonder.

As the star of South American football, in 1980 he was FIFA 'Best Player of the Year' in South America. Barcelona saw him as the player that would enhance their national and European ambitions; and on 4 June, 1982 he signed for them at a price of £5 million (another world record).

In 1982 Argentina arrived in Spain for the World Cup, as the current title holders. The 21-year-old Maradona expected great things, but his performance there was mixed. He played a total of five games, scoring twice, but after being sent off against Brazil, Argentina were knocked out in the second phase of the competition.

During Maradona's first season with Barcelona he contracted hepatitis. On 23 September, 1983 he suffered the worst injury of his football career when his left ankle was shattered, thanks to a particularly bad tackle from 'The Butcher of Bilbao' - Athletic Bilbao defender Andoni Goicoechea. After his return to full fitness, Maradona's reputation as a troublemaker started to turn the fans and press against him. Although the team won the Copa del Rey, the Spanish Cup, Maradona was allowed to leave Barcelona in 1983.

The joining of Napoli and Maradona was inspirational: it would prove to be the golden years for both parties. Napoli was a team which had never won the championship and was often regarded as a relegation candidate. This was a surprise choice for the prolific talent of Maradona. On 30 June, 1984, he signed for them, for a (then) world record fee of £6.9 million. In his first season they finished eighth and improved on that the following season.

The 1986 World Cup in Mexico was the peak of Maradona's football career. Playing some of his best football for Napoli, he was not about to disappoint on the greatest world stage of all. He played seven matches (scoring five goals), but he will be best remembered for the one he scored in the quarter-finals against England. The English will never forget the goal that he clearly scored with the use of his hand; he would later refer to it as the 'Hand of God'. (Maradona later defended his goal as his response to Britain's claim to the Falkland Islands.) The rest of the world remember his breathtaking second goal, which, from his own half-way line, he managed to weave his way past five England players to score a most exquisite goal, which was described by England coach Bobby Robson as 'a miracle'. He then went on to captain the Argentine team to victory in the final, making Maradona World Champion.

I have no recollection of watching the Hand of God goal, but the other one from the same game - my god. At the age of ten, watching with my Dad in the lounge, I remember it happening, and I remember us re-creating it in the playground the next day and for weeks afterwards. We all stopped goal-hanging like Lineker or trying to look majestic like Hoddle; every kid wanted to tear off on a run half the length of the field before slipping it past a befuddled keeper. Even at that age, we knew we'd witnessed something that would pass into legend; and don't forget, this was the most vilified man in football as far as the English were concerned.
- An h2g2 Researcher.

On 10 May, 1987, Napoli won their first Scudetto (Italian championship), elevating Maradona's celebrity status from hero to god. On 11 December he signed a £9m contract to stay with Napoli until 30 June, 1993. All initially started well: Napoli won their first-ever European trophy, the UEFA Cup, in 1989; and the Championship again in 1990; but the bubble was about to burst.

Having won his second championship with Napoli, Maradona was expecting great things from the World Cup tournament in Italy, especially as playing on his home territory and as cup-holders, they were amongst the favourites to win it again. He played seven games without scoring. He again captained the Argentinian team to the final but ended up on the losing side.

This was the tournament where the Argentines basically played for a penalty shoot-out in each game and then ironically lost the final to a dodgy penalty, and had two players sent off as well. Maradona wept openly at the presentation ceremony afterwards.

On 17 March, 1991, Maradona failed a random drugs test and was banned from playing football for 15 months. After serving the ban, Maradona refused to play for Napoli again. After a long legal wrangle over his contract, Maradona returned to Spain.

On 4 October, 1992, Maradona made his debut for Sevilla FC; unfortunately they lost 2-1. He played 26 games for them before contract negotiation and revelations in his private life2 forced his return to Argentina.

On his return to Argentina Maradona signed for Newells Old Boys and made his debut on 10 October, 1993 in a game against Independiente, which they lost 3-1. In all he only played five games for them, his last being on 2 December, 1993.

At this point in his life Maradona's career was very much a rollercoaster. He had made his international comeback in October 1993 to play Australia in the play-offs, in which he scored their goal in a 1-1 draw. He captained the team in the second leg, which they won 1-0, thus qualifying for the Finals. The World Cup tournament in the USA in 1994 was a total disaster when, after playing two games, Maradona tested positive for the banned substance Ephedrine. He was sent home in disgrace, an ignoble end to a fabulous career. At the time he equalled the record number of World Cup appearances at 21, although this was later beaten by Lothar Matthäus.

Maradona then flirted with coaching, first with Deportivo Mandiyu of Corrientes; he signed for them in October 1994 but resigned two months later. His second attempt was with Racing in May 1995 but he resigned after four months.

In October 1995 he decided to make a comeback as a player and re-signed for Boca Juniors; playing his first match for them on 7 October, beating Colon 1-0. His playing career continued until 24 August, 1997, when, playing against his old club Argentinos Juniors, he once again failed a drugs test. This time the writing was on the wall. On 25 October, 1997 he played his last match - winning 2-1 against River Plate. He announced his retirement from the game on his 37th birthday, 30 October, 1997.

He always said that he had been taken to the peak of a mountain but, once there, nobody told him what to do.
- Maradona's ex-wife and manager Claudia Villafane.

Maradona spent the first few years of the new millennium in various clinics to attempt to cure his addiction to cocaine. He was also hospitalised with various other health problems. In 2005 he had a gastric by-pass (stomach stapling) to help him lose the flab after his weight ballooned.

Maradona cleaned up his act and now, looking fit and trim, he hosts a two-hour chat show called La Noche del Diez (The Night of the Number Ten) - a reference to the Number Ten shirt he wore when playing for Argentina. His first high-profile guest was Brazilian football legend Pele; then his friend Cuban President Fidel Castro bumped up the ratings somewhat.

Gary Lineker interviewed Maradona for a BBC documentary in March 2006. The pair had played in the quarter-finals of the 1986 World Cup and Lineker was welcomed as an old friend. During the trip, Maradona took Lineker to watch Boca Juniors (Maradona is now their football director) play a game of football, which they won 3-1.

The 'Hand of God'

Some Argentine fans are so in awe of Diego Maradona they worship him as a god, with their own 'Maradonian' religion; ten commandments (one of which is to call your son Diego); and Hand of God church.

Italian director Marco Risi is making a film about Maradona's life, with Australian actor Marco Leonardi playing Maradona. The film has a working title of Maradona - La Mano di Dio - The Hand of God - the phrase Maradona used to explain the infamous goal against England in 1986. How could it be called anything else?

Maradona's story reads almost like a Greek tragedy. He was a flawed genius - almost a magician - with unsurpassed talent for the beautiful game which the protagonist never learned how to cope with. The game against England sums him up - a bit of lowdown opportunism followed by the greatest individual goal in the history of the World Cup.

1A FIFA-organised vote declared that the Spanish club Real Madrid was the greatest football club of the 20th Century, and Argentinian Diego Maradona was 'Player of the Century' alongside Brazilian Pele.2Maradona was involved in an illegitimate child case where he refused a DNA test to establish paternity.