Glasgow, Scotland - a Tourists' Guide Content from the guide to life, the universe and everything 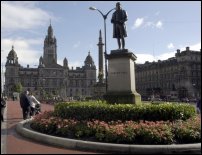 Glasgow lies on the west coast of Scotland, and straddles the River Clyde. It is Scotland's largest city, and has a strong industrial background. It is unusual for a British city in that the streets in the city centre are in a grid format, making for easier navigation.

The city of Glasgow can broadly be divided into four areas:

Glasgow offers the most comprehensive selection of shops in Scotland.

Outside the City Centre, there are two main shopping areas. The Glasgow Fort opened early in 2005, lies off the M8 on the east side of the city and comprises a selection of shops. It is outside with undercover walkways, and has a children's swing park and bus links. It is built in a semi-circular shape. For its location it is surprisingly sheltered. The Braehead shopping centre is situated off the M8 and is five miles from the City Centre, on the south side of the city. It is entirely indoors, spans two storeys and is also on the bus network. A food court and ice rink are situated inside the building.

A weekend market situated in the East End, the Barras is a local institution. It is the home of pirated CDs, DVDs, computer games, clothes and cigarettes and a perpetual source of interest for FACT1 and the local CID. If you want to see the local police in action, this the best place to come. It offers an insight into the grittier side of the city.

The majority of the pubs and restaurants are centred around four main areas:

However, you will find restaurants and pubs throughout the city.

The fish and chip shop, or chippy, is a popular source of 'nourishment' for the locals, as are the fast food vans. Here you can find delicacies like chips and cheese, chips and curry sauce, potato scone or sausage butties2 (not forgetting the deep-fried Mars Bar). There is also the Village Curry House.

With three universities3 and several colleges, Glasgow has a vibrant nightlife.

There are many parks throughout the city of Glasgow. The main ones are:

There are several art galleries and museums in Glasgow. The most popular include:

The Kelvingrove Art Gallery and Museum is due to re-open in early 2006 following refurbishment. All museums and art galleries listed are free to enter.

Glasgow is host to several theatres. These include:

The city has a lively music scene. The most popular venues include:

The Scottish Exibition and Conference Centre (SECC) is host to a wide variety of concerts, exhibitions and shows. On the site is a large crane, in honour of the shipyards.

There is also a range of poetry events.

A Selection of Sports Centres

Glasgow has two main national train stations: Queen Street Station5 and Central Station. Queen Street broadly deals with the north and east of Scotland, with departures to Dundee, Edinburgh, Stirling and Mallaig. Central similarly deals with the areas south of Glasgow, with departures to London and much of England. There are smaller local stations throughout the city.

Glasgow has an Underground, which runs in a circle (both clockwise and anti-clockwise) around Buchanan Street, Cowcaddens, St George's Cross, Kelvinbridge, Hillhead (on Byres Road), Kelvinhall, Partick, Govan, Ibrox, Cessnock, Kinning Park, Shields Road, West Street, Bridge Street and St Enoch (on Buchanan Street). The River Clyde passes between the St Enoch and Bridge St stations, and the Partick and Govan stations. An ability to walk up and down stairs is a must, as the escalators in the few stations that have them are often broken down, and few have lifts to the platforms.

By Bus or Taxi

If these let you down there are always the buses, which travel to most places, and taxis, which wait in ranks at the two main stations. The main bus station is called Buchanan Bus Station, but if you know the route of the bus you wish to take, there are also bus stops throughout the city. Express services operate from here to main cities such as Edinburgh. Many of the public buses operate a system whereby the driver does not handle the money or give out change but it is placed in a machine, so it is necessary to have the exact fare unless you wish to overpay.

In common with other British cities, two companies operate separate open-top bus tours with commentary around the main attractions of Glasgow, such as the City Chambers, Glasgow Cathedral and the People's Palace.

Glasgow International Airport is situated on the South Side of the city just off the M8. There is no rail link between the city centre and the airport, but there is a shuttle bus service and taxi rank.

As with all large cities, a wide range of accommodation is available in Glasgow - from the upmarket Devonshire Gardens to youth hostels. There are youth hostels in the city centre, such as at Charing Cross and Kelvingrove, and there are many bed and breakfasts in the area surrounding Glasgow University.

As the city lies on the west coast, the weather is often wet and windy. However, much depends on the time of year: the summer is usually dry and the winter frequently wet. In the summer, the maximum temperature could be as high as 25°C, and in the winter as low as -7°C.

Scottish dialect can be difficult for non-Scots to understand. Here is a brief summary of words and phrases more specific to Glasgow.

The BBC series Chewing the Fat and Still Game provide excellent examples of the local accent.

A few of the best-known Glaswegians are:

Charles Rennie Mackintosh was a Glaswegian architect, designer and artist. The buildings he designed in Glasgow include:

1Federation Against Copyright Theft.2Rolls.3Glasgow, Strathclyde and Glasgow Caledonian.4Easily recognised by the traffic cone on his head.5This station, along with the City Chambers, borders George Square, which is the home of several statues and a war memorial.