Constellations: Ursa Major 'the Great Bear' Content from the guide to life, the universe and everything 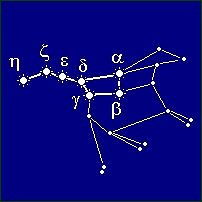 Before the advent of city lights drowning out the heavens there were men who walked this earth and looked up in wonder at the night sky. They connected the dots of light above them and created pictures in the mind. Some of these creations gained widespread acceptance and were taught by Magi and others. Today 88 of these constellations are internationally accepted. This Entry deals with the northern constellation Ursa Major.

Although it is not seen by observers in the far southern hemisphere, Ursa Major is probably the most recognisable of all constellations for those north of the Equator and one of the earliest to be learned. Here is what one astronomy book says about the antiquity of this grouping and its designation as a bear:

It is an extraordinary fact, indicating the extreme antiquity of this designation and the persistence of folk memory, that it was known thus in the most widely separated parts of the world: Chaldeans, Persians, Indians, Phoenicians, Egyptians and North Americans all knew the constellation as a bear.
- SB Sidgewick Introducing Astronomy (1957)

North American lore saw the four brightest stars as the bear and the stars in the handle as a hunting party: one carrying a bow and arrow; the second a pot to cook the bear; and the third some fire to light the tinder beneath the pot. They said that the bear would emerge from its den in the spring, be chased all summer, and in the autumn when it was mortally wounded, its blood dripping on the forest would paint the leaves red.

Ursa Major sits in the sky above the pole during summer evenings and reaches its lowest point (dipping below the horizon in some latitudes) during the winter. There is an imaginary line from Merak through Dubhe, the two brightest stars (these stars spaced five degrees apart). This line points due north and is used to locate Polaris (The Pole Star). For this reason these two stars are sometimes called 'the pointers'.

A test of how clear your sky is (or how good your eyes are) will be found at the second star from the end of the dipper's handle. Listed together in the table below Mizar and Alcor are only a fifth of a degree apart and the brighter of the two was the first binary to be split into components (Mizar A and Mizar B) by a telescope. Spectroscopes later revealed that these are both doubles themselves; the closest pair being a mind-boggling seven or eight thousandths of an arcsecond apart.

There was a young maiden named Callisto in the employ of Artemis. The tale tells how she was seduced by Zeus, the king of the gods. This made his wife Hera very jealous. Callisto gave birth to a son, Arcas. She would have met a dreadful fate at the whim of Hera except that Zeus had changed Callisto into a bear thus hiding her from his wife.

Many years passed and Arcas grew into a handsome young hunter. As chance would have it his path crossed that of Callisto one day, and the mother wanted a closer look at her now fully-grown son. As she approached, however, he did not recognise her and prepared to slay this bear which he thought was attacking him. Zeus, however, was watching and stopped Arcas from killing his mother. Hera, also, now knew where to find her rival and would have killed her on the spot but Zeus grabbed the bear by the tail and flung her into the heavens. Then he changed the son into a bear cub and did likewise with him.

Hera then went to Tethys, the wife of Oceanus, and together the two goddesses cooked up a curse, making the two bears forever travel in circles, never to dip their snouts into the ocean. Thus it was explained why, in northern latitudes, the constellations are always above the horizon.

In about 1600, Johannes Bayer set up the current system of calling the brightest star alpha and then proceeding down the Greek alphabet for subsequent stars; Ursa Major, however, has the first seven stars in a sequence dependent on position rather than magnitude. When all Greek letters are used the remaining stars on a chart are given numbers first assigned by John Flamsteed.

The seven stars alpha to eta form a well-known asterism (a group of stars which isn't a recognised constellation) which goes by many names. It is worth noting that of these seven stars only Alkaid and Dubhe are independent. The other five move through space together. Here is a list of some of the names for this grouping:

Galaxies and Nebulae of Ursa Major

The objects in the second table are too dim for the naked eye. These galaxies and one planetary nebula have mainly been catalogued under Messier numbers (or NGC Numbers which was a more recent catalogue).

There have been several extrasolar planetary systems found in the constellation Ursa Major up to 2010. Figures given in the table below are the length of the planet's orbital period around its parent star, which we know of as a year. The mass of the extrasolar planet is compared to that of Jupiter, our Solar System's largest planet; this is known by astronomers as the 'Jovian scale'.

The star 47 UMa is a target star on the 'Cosmic Call' list. This is a shortlist for suitable stars which may host similar solar systems to our own, and viable possibilities for the search for extra-terrestrial life. Up to 2010, three planets, 47 UMa b, 47 UMa c and 47 UMa d have been discovered in orbit; all are gas giants.

1Current IAU guidelines use a plus sign (+) for northern constellations and a minus sign (−) for southern ones.2A light year is the distance light travels in one year, roughly 5.88 trillion miles or 9.46 trillion km.3Alcor (80 Ursae Majoris) is one of a relatively small company of stars which has a proper name but no Greek letter name.4The Arabs once called this pair 'the horse and rider'.5The mourning ladies: they are Alkaid, Mizar and Alioth.