Constellations: Andromeda 'the Chained Maiden' Content from the guide to life, the universe and everything 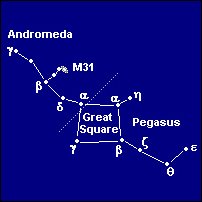 Now Time's Andromeda on this rock rude,
With not her either beauty's equal or
Her injury's, looks off by both horns of shore,
Her flower, her piece of being, doomed dragon's food.
–  Andromeda by Victorian poet Gerard Manley Hopkins (1844 - 1889)

The large northern constellation of Andromeda was listed by Ptolemy as one of the 48 original constellations handed down from antiquity. It is at its peak during late autumn and winter months when it can be seen to the south of the prominent W of Cassiopeia. Andromeda appears as an elongated Vee, with the two chains of its principal stars coming to a common apex at its brightest star alpha Andromedae Alpheratz. The two arms of the Vee extend north-west, with the more southerly of the two consisting of the brighter stars, epsilon, delta, beta and gamma. The northerly arm extends through pi, mu and 51 Andromedae.

The Great Square of Pegasus is to its west and it is bounded by Perseus to its east. The convention when referring to one celestial object in relation to another is to refer to it being either North, South, East or West of it. To orientate yourself imagine you are standing with your back to North, looking South. East is to your left and West is to your right. Now look at the portion of sky just above the horizon. South is at the bottom of this piece of sky so North must be at the top (right up and over your head behind you). East is still to the left and West to the right. Therefore in this case, Pegasus being apparently to the right of Andromeda can be said to be West of it. For observers in the southern hemisphere the positions are reversed. North is now down and South is up, while East is now to the right and West to the left.

Andromeda was the daughter of King Cepheus and Queen Cassiopeia of Æthiopia. The vain queen Cassiopeia offended the god of the oceans, Poseidon, when she boasted that her own beauty and that of her daughter was greater than that of the sea nymphs, the Nereids, who were his handmaidens. Angry Poseidon sent storms to ravage the coast of their kingdom as punishment for the queen's vanity. To bring an end to the suffering, King Cepheus went to the Oracle of Ammon for advice and was told to sacrifice his daughter Andromeda to the sea monster Cetus in order to placate Poseidon.

Andromeda was duly chained to the rocks on the coast2 for the sea monster to devour. She was saved at the last moment by the hero Perseus, riding in on his winged horse Pegasus. Perseus turned the monster to stone with a look from the head of the gorgon Medusa, who he had recently slain.

Afterwards, Perseus tried to claim his promised reward from the king and queen: Andromeda's hand in marriage and a nice fat dowry. The scheming parents tried to renege on the deal by marrying her off to her previous intended, but at the wedding feast Perseus appeared and kidnapped the bride. He took her to Seriphos where they settled down and got married. Their descendants founded the Persian race, and they were the ancestors of Hercules.

The scientific star names are simple to understand (if you know your Greek alphabet). 'Alpha Andromedae' means that it is the brightest star in the constellation Andromeda. The next brightest is 'beta Andromedae', etc. This is known as the 'Bayer designation'. Some are named stars, like alpha Andromedae is Alpheratz; others are known by their catalogue number.

Alpha Andromedae (known by the traditional names of Alpheratz and Sirrah) was originally part of the adjacent constellation Pegasus until the International Astronomical Union (IAU) reorganised and consolidated constellation boundaries in 1930, when it was then assigned to Andromeda as its principal star. Consequently the meaning of its name, 'Horse's Navel', has an equine flavour, which is hardly in keeping with a 'chained maiden'. Nevertheless, Alpheratz is still commonly recognised as the north-eastern corner of the 'Great Square of Pegasus'; it is magnitude +2.06 at 120 light years3 distant.

Beta Andromedae, which has the traditional name of Mirach ('The Girdle'), is at the waist of Andromeda and is reddish in hue at +2.07 magnitude. It has a 14th magnitude dwarf companion and is 75 light years distant.

The meaning of gamma Andromedae's traditional name, Almach, which marks one of the lady's feet, originates in early Arab astronomy. It refers to a small Arabian mammal similar to a badger, but has little connection with the Greek legend. It is, however, one of the finest coloured double stars in the night sky. It requires a small telescope to separate its components into a primary red/orange and a blue/green secondary, but the effort is worth it:

This double star is one of the most beautiful objects in the heavens. The striking difference in the colour of the two stars suggest the idea of a sun and its planet.
– William Herschel giving Almach a glowing reference.

Al Anfal (51 Andromedae) is one of the few stars that have a proper name but no assigned Greek letter.

The constellation Andromeda has some interesting deep-sky objects, three of which feature in the famous Messier catalogue.

Undoubtedly one of the night sky's showpiece stellar objects is M31 (NGC 224), also known as the Andromeda Galaxy, our closest neighbouring spiral galaxy. We now know it is a galaxy type Sb with two arms which form a ring in ultraviolet light. It is thought that this is what our own galaxy the Milky Way looks like, but we don't know for sure.

The Andromeda Galaxy is visible to the naked eye on a clear night (if you know specifically where to look for it) and is seen as a light fuzzy patch. Historically it was first mentioned as 'Little Cloud' in 965 by Al Sufi5, and rediscovered by the German Simon Marius in 1612. It was designated a 'diffuse nebula' by Messier and subsequently Dreyer for the NGC, as no-one knew about galaxies then. The Andromeda Galaxy was resolved into stars in 1944.

At 2.5 million light years (Mly) distance it is generally accepted as the most remote object that can be seen with the naked eye. Its size is almost three and a half degrees; if it was brighter it would appear to us as the size of seven full moons. The great spiral encompasses an estimated one trillion stars (1012).

The Andromeda Galaxy can be found by star-hopping along the northern chain of stars from Alpheratz, through pi and mu And, then north-east about four degrees where it will be found adjacent to nu And. Constellations are formed by joining up the dots (stars) with imaginary lines, and, much like a child's game, you end up with a recognisable shape. The Andromeda Galaxy isn't one of the component parts of the Andromeda pattern, it's just named after the constellation because we see it as part of it from our vantage point.

If you can wait for a while, you may get a much better view of it – it is heading this way and is due to collide with our own Milky Way galaxy in about three billion years.

The Great Spiral Galaxy is accompanied by M32 (NGC 221), which lies about a half of a degree to its south. M32 was discovered by the French astronomer Guillaume Joseph Hyacinthe Jean-Baptiste Le Gentil de la Galaisière6 in 1749 and was a rare success for him. Just over a decade later, Le Gentil travelled to India to observe the 1761 Venus transit, but didn't reach his destination in time due to the Seven Years' War between England and France (1756 - 1763, known as the French and Indian War by Americans) being in full swing. Le Gentil survived severe illness and almost getting killed by a hurricane, but remained in India to view the 1769 event7, when, just during the transit, there were clouds blocking the Sun. Le Gentil was so depressed that he couldn't even write his report to the French Academy of Sciences. When he eventually returned home after an absence of ten years, Le Gentil found that he had been presumed dead, his wife had remarried and that his job at the French Academy of Science had been given to someone else.

The other Messier catalogue object, M110 (NGC 205), is a small elliptical galaxy estimated to be between 3.6 and 15 billion solar masses. M110 is remarkable for having a system of eight globular clusters orbiting it like a halo.

Both of these companion galaxies require optical aides such as binoculars or a small telescope to be viewed.

I first noticed them soon after the close of evening twilight, and having no other business, I kept count of the number [100 per hour for four hours] which appeared in the small segment of the heavens which I could with convenience survey from my seat.
- HW Brandes of Göttingen, Germany, recounting his lucky night of 6 December, 1798, the first recorded account of the Andromedids.

The Andromedids, or Bielid Meteors, have a radiant point near gamma Andromedae in mid-November and are named after the comet discovered by Austrian astronomer Wilhelm von Biela (1782 – 1856) in 1826. The parent comet broke up in 1846, and this was observed. The next time of passing - a gap of six years - there were twin comets, but they've never been seen since. The Bielids have produced some spectacular showers though, notably in 1872 and 1885, but after the break-up and disappearance of the parent comet, showers became less prolific to the point of near exhaustion. They orbit in the same direction as the Earth and produce apparently slow trains of orange sparks, but their frequency is currently down to only a few per hour.

The Holy Grail of astronomers is to find an Earth-sized rocky planet in a stable orbit at the right distance around a star which isn't too unstable - then they can start searching for signs of life.

Upsilon Andromedae has a planetary system with four extrasolar planets, three of which have a greater mass than our own gas giant Jupiter, but the other one is measured at ¾mJ. The smallest planet is closest to its sun and not considered habitable due to the extreme heat (think Mercury in our Solar System). Three of these exoplanets have been named by the IAU: Upsilon Andromedae b is Saffar, Upsilon Andromedae c is Samh and Upsilon Andromedae d is Majriti. They honour 11th-Century Spanish astronomers.

Andromeda polifolia is more commonly known as bog rosemary, a small shrub with evergreen leaves that is related to the magnolia family. Pieris floribunda, also a member of the magnolia group, is better known as mountain andromeda.

1Current IAU guidelines use a plus sign (+) for northern constellations and a minus sign (−) for southern ones.2This scene inspired artists such as Vasari, Paul Gustav Doré and Théodore Chassériau.3A light year is the distance light travels in one year, roughly 5.88 trillion miles or 9.46 trillion km.4The Caldwell Catalogue is '109 Deep-Sky Delights for Backyard Observers' by Sir Patrick Moore.5His full name is Abd al Rahman Abu al Husain, usually referred to in most instances as Al Sufi.6As this name is quite a mouthful, we'll just call him 'Le Gentil'.7Venus transits occur twice in eight years, then you have to wait over a century for the next.