Constellations: Orion 'the Hunter' Content from the guide to life, the universe and everything 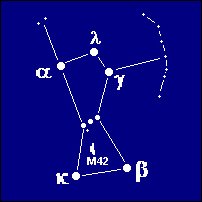 A major constellation in the equatorial region of the sky, Orion represents a figure of a hunter from Greek mythology. Not only is 'The Hunter' amazingly large and beautiful, but it can also be used to find some of the most stunning stars in the sky. Orion is one of the most familiar constellations, and indeed the easiest to find. It is probably the most prominent of the constellations in the Northern Hemisphere's winter and second only to Ursa Major 'the Great Bear' on the 'instantly recognisable' scale. In countries south of the equator, Orion appears upside-down in the sky. Orion sits between Taurus 'the Bull' and Gemini 'the Twins'. Bordering constellations are Eridanus, Lepus and Monoceros.

Orion is depicted to be hunting Taurus, the bull, assisted by his hunting dogs, Canis Major and Canis Minor. He is usually shown holding a club in one hand and the hide of either a bull or a lion in the other.

Orion's Belt is a line of three very prominent stars. Four stars form a box around the belt, one each representing Orion's shoulders and legs. Other stars form a sword hanging from the belt and his raised arm and club.

The constellation Orion is referred to three times in The Bible: Job 9:9; Job 38:31; and Amos 5:8. The night sky's imaginary hunter is also immortalised in Odes (or Carmina) by Roman poet Quintus Horatius Flaccus (Horace), The Odyssey and The Iliad by Homer, and Virgil's Aeneid.

According to mythology, Orion was one of the greatest hunters the world has ever seen. There are two versions of the Orion story.

In the first version, he was the son of the sea-god Poseidon (Neptune) and Queen Euryale of the Amazons. He inherited his mother's hunting talent and became an excellent hunter. Unfortunately, his ego was to be his undoing. In response to his boast that he could kill any animal in the world, he was killed by a scorpion.

In the second version, he was first blinded by King Oenopian2 and then killed by Diana who was the 'virgin' goddess of hunting. She fell in love with Orion but her brother, Apollo, did not like this, and subsequently tricked her into shooting a black 'animal' swimming in the water - which, alas, turned out to be Orion's hair.

The scientific star names are simple to understand (if you know your Greek alphabet). 'Alpha Orionis' means that it is the brightest star in the constellation Orion. The next brightest is 'beta Orionis', etc. Some are named stars, like alpha Orionis is Betelgeuse; others are known by their catalogue numbers or 'designation'.

Betelgeuse (alpha Orionis) is a red supergiant which marks Orion's right shoulder. It is one of the stars which forms the northern hemisphere's 'Winter Triangle', an asterism which is not a recognised constellation. Betelgeuse is so huge that if you transported it to our solar system it would encompass the Earth's orbit. To find it, imagine a line at right angles to the belt and look for a star with an obvious reddish tint. Once you have one shoulder, the other four points are easy to see; the star that represents his left leg is Rigel.

Rigel (beta Orionis) and Rigel 'B' are a binary star system (they are gravitationally bound to each other). Rigel is almost pure white and is of the first magnitude.

Alnitak (zeta Orionis), Alnilam (epsilon Orionis) and Mintaka (delta Orionis) appear to be in an almost straight line and form the famous 'Orion's Belt'. Alnitak is a triple star system, a blue/white binary with a fainter, more distant companion star.

On a really clear night you should be able to see the Orion Nebula dangling from the belt like a sword. This is not a star at all, but a distant cloud of glowing gas and dust in which new stars are being formed - a sort of stellar nursery. Messier 42 is approximately 1,500 light years away, and measures 30 light years across. It contains four stars known as 'Trapezium'. It appears particularly impressive when viewed through a telescope.

Discovered by Jean-Jacques d'Ortous de Mairan in 1731, M43 is part of M42, but separated from the main nebula by a wide, active path of unknown composition. M43, a bright emission and/or reflection nebula is kidney-shaped. Sir William Herschel studied M42 and M43 many times, describing their appearance 'milky' in his observational notes:

In the year 1774, 4 March, I observed the nebulous star, which is the 43d of the Connoissance des Temps and is not many minutes north of the great nebula; but at the same time I also took notice of two similar, but much smaller nebulous stars; one on each side of the large one, and at nearly equal distance from it. In 1783, I re-examined the nebulous star, and found it to be faintly surrounded with a circular glory of whitish nebulosity, faintly joined to the great nebula. About the latter end of the same year I remarked that it was not equally surrounded, but most nebulous toward the south. In 1784 I began to entertain an opinion that the star was not connected with the nebulosity of the great nebula in Orion, but was one of those which are scattered over that part of the heavens.
- Extract: 'Of the Distance of the Nebula in the Constellation Orion' from First Catalogue of Nebulae and Clusters.

The Horsehead Nebula was named after its shape, a rearing horse with flowing mane first identified by Scottish astronomer Williamina Paton Stevens Fleming  (1857 - 1911) in 1888. At 1,600 light years distance and over a light year wide, this star factory has fascinated generations of astronomers5. The dark, gassy areas are thick, swirling6 clouds of dust which will eventually form new stars.

Formed from the collision of several smaller galaxy clusters, galaxy cluster Abell 520 is some 2.4 billion light years from Earth.

The world-famous Halley's Comet orbits the Sun every 76 years, shedding a layer of dust particles. It leaves behind enough debris to provide us with the annual Orionid meteor shower, which peaks every October. Though not the best astronomical event of the year, the show is dependable and regular enough to be nicknamed 'Old Faithful'.

There have been some extrasolar planetary systems found in the constellation Orion. Figures given in the table below are the length of the planet's orbital period around its parent star, which we know of as a year. The mass of the extrasolar planet is compared to that of Jupiter, our Solar System's largest planet; this is known by astronomers as the 'Jovian scale'.

S Ori 70 is interesting to astronomers due to it being contested as its current status as a planetary object. Some experts think it is a 'field brown dwarf', while others think it is a member of a planetary system surrounding the quintuple star sigma Orionis. The yellow dwarf HD 38529 is interesting to SETI-seekers due to its similarity to our own Sun, and it features on the 'Cosmic Call' list. Two objects have so far been discovered in orbit around HD 38529, although both are outside the habitable zone. HD 290327 b was announced in the bumper crop of 19 October, 2009. It's a superjovian orbiting a yellow sub-giant star in about six and a half Earth years.

1Current IAU guidelines use a plus sign (+) for northern constellations and a minus sign (−) for southern ones.2King Oenopian blinded Orion after Orion tried to forcibly marry his daughter.3A light year is the distance light travels in one year, roughly 5.88 trillion miles or 9.46 trillion kms.4'The Fourth Star of Jade Well'. Jade Well is a Chinese asterism which comprises: tau Ori, beta Eridani, lambda Eridani and psi Eridani.5Sir Patrick Moore wrote about the Horsehead Nebula in his Observer's Book of Astronomy (1962).6At the distance and timescale we are at, we can't see that occurring.7In the case of Ford - a small planet somewhere in the vicinity of Betelgeuse, while Zaphod hails from Betelgeuse Five.