The Bible - a Perspective Content from the guide to life, the universe and everything 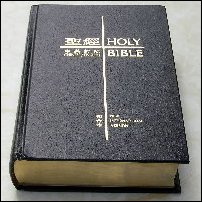 The Bible is a very old book that a lot of people take very seriously.

Part of it is holy for Jews, the whole thing is holy for Christians, and it's also a very important text for followers of Islam.

Theoretically, one who belongs to any of these religions is supposed to live their life based on its teachings, although this is sometimes hard because its teachings can be kind of silly - or at least a little anachronistic when one considers the times we now live in. The Bible is composed of two 'Testaments', the Old and the New, which are in turn divided into a number of smaller books, which are in turn divided into chapters and verses. Hence the notations such as 'Lev 14:28' which refers to the book of Leviticus, chapter 14, verse 28, which reads:

[the priest] shall put some of the oil that is in his hand on the lobe of the right ear of the one to be cleansed, and on the thumb of the right hand, and the big toe of the right foot, where the blood of the guilt offering was placed.

The Old Testament is an extraordinary collection of stories, written originally in Hebrew, about the creation of the universe, and the trials and tribulations of men within it. This book features a vengeful God - Yhwh is his proper name - who does all kinds of cool things like turning into a pillar of fire (Exodus 13:21), destroying cities which he doesn't like (Genesis 19:24), and generally raining down plagues on all who oppose him.

The much less cool bit of the Old Testament is that about half of it, the half without the cool stories, is full of laws that prohibit doing just about anything that's fun. It could be interpreted, from Leviticus and Deuteronomy, that promiscuity, covetousness, bacon, homosexuality and other activities are strictly off-limits.

Christians more or less ignore the laws that they don't like, and feverishly obey the laws they do like.

After the Torah come a whole bunch of books about prophets and kings, also often featuring a vengeful, violent God. Many of these books are beautifully written, and worth reading as literature if nothing else. Especially worth checking out is the Song of Solomon, which is basically a big long raunchy poem about seducing women.

To have glued this New Testament to the Old Testament to make one book... is perhaps the greatest audacity... that literary Europe has on its conscience.
- Nietzsche, Beyond Good and Evil, Section 52

While this may be an exaggeration, the New Testament is decidedly less fun than the Old Testament. Its core books are the 'Gospels', that is, four different versions of almost exactly the same set of events1. This can get quite boring after you've read three or four. One imagines that not many people ever actually read them all back to back, the way you can with the Old Testament.

They all, more or less, tell about the life of Jesus, and what he said that people should do. In a nutshell, we should all love one another and be happy and share what we own - a kind of Communism in its absolute purest sense of the word.

After the Gospels come the Book of Acts, which describe what the followers of Jesus did for the short while after he lived, and is kind of interesting if you look past the rhetoric and see all the infighting that went on - a bit like the Soviet Union after the death of Lenin.

After the Book of Acts there are a bunch of letters from an early church leader named Paul to the people of various cities around the Mediterranean. It is really these letters which define contemporary Christian doctrine. Paul, in an effort to get people to follow what Jesus said, suggests that people who follow Jesus don't actually need to obey all the laws. Specifically, they get to eat bacon and don't need to be circumcised. Circumcision was an especially big issue, as this was well before the invention of anaesthetics. Paul wasn't too consistent though, because he said that there were a whole lot of laws that still had to be obeyed, like the ones about sex.

By far the coolest part of the New Testament is the last bit, called the Book of Revelation. This book is a big long weird dream about dragons and fire and angels, and the Antichrist and seals being broken and stuff. This book is generally perceived to predict the Apocalypse.

The New Testament is the most important book to Christians. It is shunned by Jews, who don't recognise Jesus as the Messiah (except for the Jews For Jesus, a group of what seems basically to be Christians), and Muslims see the Gospels as prophecy, just not as important a prophecy as the Koran, their equivalent to the Bible.

Now, here's a few passages from the Bible which seem funny to us these days if we read what's being said in a literal fashion. Some passages contain real pearls of wisdom, nonetheless. Most of you should be able to find a Bible in the desk drawer of any reputable hotel/motel, and may find the following passages enjoyable.

1 Kings 7:23 - A circle is made, ten cubits in diameter and 30 cubits in circumference. Anyone with a grade nine education knows the problem with that.

Ecclesiastes 9:5 - There seems to be no heaven or hell once you die.

Song of Solomon 5:2-6 - You don't have to read too much into it to know what this means.

1A number of other accounts of Jesus's life ranging from the mundane to the mystical, supposedly by Philip, Thomas, Mary Magdalene and others, were rejected for inclusion in the New Testament at the Council of Nicaea.