Constellations: Taurus 'the Bull' Content from the guide to life, the universe and everything 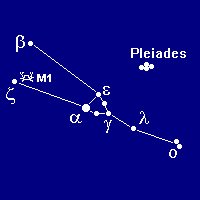 Or sweet Europa's mantle blew unclasp'd,
From off her shoulder backward borne;
From one hand droop'd a crocus;
The other grasp'd the mild bull's golden horn.
- Alfred, Lord Tennyson - The Palace of Art.

Taurus is a major constellation in the northern hemisphere and the second sign of the western zodiac. Situated just to the north-west3 of Orion the Hunter, Orion's 'belt' (zeta Ori: Alnitak; epsilon Ori: Alnilam; and delta Ori: Mintaka) is roughly lined up with the 'eye of the bull' - the giant orange star Aldebaran4 (alpha Tauri). Once this star has been identified, the constellation itself can be discerned; the main stars form a 'V' which are taken to be the bull's head and horns.

Objects of particular interest include:

In 1940 a reported 16,500-year-old map of the Pleiades star cluster was discovered on a cave wall at Lascaux in central France. Draped above the shoulder of a painted bull are markings which could represent the 'seven sisters'.

Around 17,000 years ago, this region of sky would never have set below the horizon and it would have been especially prominent at the start of spring. It is a map of the prehistoric cosmos. It was their sky, full of animals and spirit guides.
- Researcher Dr Michael Rappenglueck, University of Munich.

The ancient Egyptians identified Taurus with Osiris, the god of life, fertility and the flooding of the Nile (upon which all life in Egypt depended). They worshipped the figure Apis, which had either a human body with the head and horns of a bull, or a bull's body with a human head. On the ceiling of a tomb in Luxor (Thebes), a representation of the constellation Taurus is portrayed.

According to Exodus in the Bible, when Moses was busy up a mountain receiving the Ten Commandments, his followers got a bit bored. In the end they melted down all their collective gold and fashioned a bull which they then danced around and worshipped.

The Pleiades are mentioned in the Biblical book of Job, who speaks of the 'sweet influence' of them. The Pleiades are known in Sanskrit as Krittikas (the wives of the seven rishis). The rising of the Pleiades was considered a sign that the season for sailing had begun by ancient mariners, who believed a goddess protected sailors from storms.

The supernova which created the Crab Nebula was seen from Earth in 1054. The actual stellar explosion7 took place 6,500 years before that, but it took the light until the year 1054 to reach us. It was so bright that it was viewable during the day and witnessed by Chinese astronomers, who kept meticulous records of the 'guest star'.

The scientific star names are simple to understand (if you know your Greek alphabet). 'Alpha Tauri' means that it is the brightest star in the constellation Taurus. The next brightest is 'beta Tauri', and so on. Combined with the genitive name, this is known as the 'Bayer designation'. Some are named stars, like alpha Tauri is Aldebaran. Other stars are known by their catalogue number.

The two galaxies NGC 1409 and NGC 1410 are interacting and have collided many times. The gravitational pull is such that there is no escape for either of them and they will continue to bump and grind until they eventually become one huge galaxy.

The Taurids - a Meteor Shower

There is an annual meteor shower called the Taurids, so named because they appear to originate from the constellation of Taurus. Meteor showers occur when the Earth passes through the debris path left by the tail of a comet, in this case comet Encke. As the peak happens around the end of October, they are sometimes known as Hallowe'en fireballs.

Some extrasolar planets have been discovered in orbit around stars which make up the constellation Taurus.

Gliese 176 (also catalogued HD 285968) is a red dwarf star approximately 31 light years distant. An exciting find in 2007 was a 'Super Earth' planet orbiting this star. Such planets are terrestrial like the Earth, rather than the gas giants which seem more common.

HD 37124 is a yellow dwarf not unlike our own Sun. The system boasts three extrasolar planets, all gas giants. The width of the so-called 'Goldilocks Zone' is estimated to be between 0.5 AU and 1.5 AU (AU being the distance between the star and the planet). One of these, planet b, resides just inside the habitable zone, and planet d orbits just outside the extreme limit. Planet c is much further out; the reason the letters are not in order of distance from the star is because they are catalogued when discovered, and planet d was detected later than planet c.

Figures given in the table below are the length of the planet's orbital period around its parent star, which we know of as a year. The mass of the extrasolar planet is compared to that of Jupiter, our Solar System's largest planet; this is known by astronomers as the 'Jovian scale'. Jupiter's mass is more than 300 times that of Earth's.

Taurus represents the white bull who fell in love with a beautiful mortal, Europa9, Phoenician princess of Tyre, daughter of King Agenor of Sidon. The white bull was, of course, Jupiter (Zeus), king of the gods, in one of his disguises. Attracted to the magnificent creature, Europa decorates his horns with a garland of flowers and cannot resist straddling him for a ride. The bull then carries her off across the waters to the continent which still bears her name. She resists his amorous attentions, so to have his wicked way, Jupiter has to resort to rape10.

According to some interpretations, their third son became King Minos of Crete. The Minoan people were really into bull-worship. Queen Pasiphaë, the wife of King Minos, was so infatuated with a bull that she commissioned Daedalus to build a hollow wooden cow. The intention was to hide inside and fool the bull into coupling with her. The plan worked and the result of the mating was the Minotaur, a monster which was part-man, part-bull. Daedalus was then given the job of designing a labyrinth in which to imprison the Minotaur, by King Minos. Around 1450 BC the Minoan people who created the stories of the Minotaur and the Labyrinth vanished, possibly wiped out by a tsunami following a volcanic eruption.

According to Greek mythology, Pleione (28 Tau) was the wife of Atlas (the god who carried the heavens upon his shoulders). They had seven daughters: Alcyone, Asterope, Celaeno, Electra, Maia, Merope and Taygeta. When the seven sisters11 complained that they were being pursued by Orion the hunter, the gods changed them into stars and they became the Pleiades. It is thought the name comes from the Greek peleiades, which translates as 'flock of doves'.

The Hyades were also daughters of Atlas, but their mother was a goddess called Aethra. They had a much-loved brother, Hyas12, and when he died while out hunting, his sisters grieved so much that they never stopped crying. In legend, the rising of the Hyades is a portent of rain, supposedly the continuous tears of the heartbroken sisters.

1Current IAU guidelines use a plus sign (+) for northern constellations and a minus sign (−) for southern ones.2This is fictional information invented by astrologers to make the sun fit their charts. The astrologers' charts have been out of date for about 2,000 years.3To the right if you are in the northern hemisphere. Star directions don't work the same as directions on the surface of the Earth. If north is at the top, then west is to the right.4Arabian meaning 'the follower'.5A light year is the distance light travels in one year, roughly 5.88 trillion miles or 9.46 trillion km.6It would take light 150 years to reach us from there and light travels extremely fast - around 186,000 miles per second. So 'close' in this case means 'astronomically close', not anywhere nearby.7According to the writers of Doctor Who, the Crab Nebula was the result of the population of Uxarius giving their judgement-day weapon a trial run.8An ancient Babylonian name meaning 'the star in the bull towards the south'.9One of Jupiter's main moons is named after her.10The kidnapping and rape of Europa has been the subject of many poems and works of art, such as the 1580 ceiling painting in the Ducal Palace in Venice, Italy, by Paolo Veronese (1528 - 1588).11The Pleiades are traditionally known as the Seven Sisters, even though only six of them are visible to the naked eye.12Hyas was transformed into the constellation Aquarius.