Constellations: Leo 'the Lion' Content from the guide to life, the universe and everything 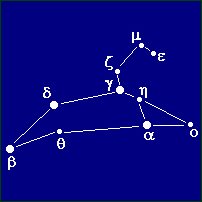 The name Leo comes from the Latin form of the Greek leon, which means lion. Measuring 947 square degrees, this northern constellation numbers 12th largest. It is situated between Virgo and Cancer, and also bordered by Leo Minor above its 'head'. The head of the lion and Regulus form a shape like the mirror image of a question mark. In olden times it was sometimes considered to be a constellation in its own right, and bore the name The Sickle2. The Sickle was formed by the stars Regulus, eta, gamma, zeta, mu and epsilon Leonis.

Today a non-constellation group of stars is called an asterism - the Plough (part of Ursa Major - the Great Bear) is one, as is the Summer Triangle.

For amateur astronomers looking for interesting deep-space objects to view, there are five Messier galaxies to track down, and the breathtaking edge-on galaxy NGC 3628 adorns many a professional astronomer's desktop. The constellation itself has some fascinating history; there is a famous meteor shower, and plenty of extrasolar planets are being discovered.

For the ancient Greeks, Leo was the Nemean (or Cleonaean) lion with impenetrable skin that Hercules killed as one of his 12 labours.

Throughout history, the 'king of the beasts', the African lion, symbolised strength and courage. In Egypt the annual Nile flood has always been vital for all life there, and it used to happen while the Sun appeared to pass through the lion constellation. Some historians believe the Sphinx, with its head of the pharaoh and body of a lion, was built to honour it.

The lion appears in heraldry and is usually associated with royalty. The coat of arms of Queen Elizabeth II has seven lions on the shield, a lion supporter (along with the unicorn) and a lion on top, standing on a crown!

The debris which creates a meteor shower comes from the tail of a comet, as the Earth crosses where the comet passed previously on its own orbit. Imagine a trail of breadcrumbs, or sawdust like that used in hashing. The display is at its best when viewed as soon as possible following the comet's visit; this particular dust which causes the Leonid meteor shower comes from the comet Tempel-Tuttle, which orbits the Sun every 33.25 years. An account was recorded for posterity of the fabulous display in 1799:

During the four hours we observed thousands of huge fireballs, often with a brightness like Jupiter. Long smoke trails were left behind.
- Astronomer Alexander Humbolt observing from Chile.

Who could have guessed that the Leonids would provide an even better show? A very famous date, embedded in the hearts of astronomers everywhere, was when a sprinkling of comet dust was left behind after comet Tempel-Tuttle's passage through the inner Solar System in 1833; the trail hit the Earth's atmosphere on the night of 12 November, 1833. An estimated 200,000 meteors fell between 2am and dawn, creating a legend for the Maricopa Indians of North America, who told the story of 'the night the stars fell' for generations thereafter.

The spectacle repeated in 1866, but the expected showers of 1899 and 1932-3 did not materialise. It was predicted that the 1966 event would be phenomenal, so Patrick Moore, the host of the BBC's long-running astronomy programme The Sky At Night, encouraged his viewers to take part in a 'meteor watch' in the hopes of garnering plenty of data to discuss later. Over ten thousand viewers signed up and received their charts to record the expected celestial fireworks. They waited and waited, but nothing happened. Many stayed up all night in vain, and several of the most irritated rang the BBC to check they'd got the correct night. Patrick was baffled, until the following day when reports came in of a spectacular meteor shower (over 100,000 per hour) taking place over much of the western hemisphere, some 12 hours after the predicted time. In Britain nobody saw a thing; the guinea pigs of the first ever viewer-participation experiment were on the wrong side of the planet.

The Leonids has its virtual point of origin near gamma Leo. You can see them between 14 – 20 November; the maximum rate usually occurs around the 17th. The number of meteors per hour, known as the ZHR (Zenithal Hourly Rate), is very difficult to predict for this shower, but it's usually low: ten or less. The last time comet Tempel-Tuttle shot through was early 1998, but the predicted meteor storm of November 1998 hit the earth at the wrong time of day for those in the higher northern hemisphere. Astronomers working at the UK's Isaac Newton Telescope on the island of La Palma in the Canaries reported meteors at a rate of 2,000 per hour until dawn broke on Tuesday, 17 November. Lucky them!

The scientific star names are simple to understand (if you know your Greek alphabet). For example: 'alpha' means that it is the brightest star in that constellation. The next brightest is designated 'beta', etc. Combined with the genitive name, this is known as the 'Bayer designation'. Some stars have proper names as well, for example, alpha Leonis is Regulus. Others are known by their catalogue number.

Leo's main star Regulus (alpha Leonis) is one of the four 'Royal Stars' in Mesopotamian culture, the others being Antares (alpha Scorpius), Fomalhaut (alpha Piscis Austrinus 'the Southern Fish') and Aldebaran (the 'Eye of the Bull' in Taurus). Regulus is also called Cor Leonis, which is Latin for 'heart of the lion' or 'the lionheart' (there's that royal connection again!) Of the 25 brightest stars, Regulus is one of very few bright stars close enough to the ecliptic, the path of the planets, to be able to form conjunctions with the planets of our Solar System and with the Moon.

Algieba (gamma Leonis) is a highly regarded binary system. The brighter of the pair is an orange giant and its companion is a yellow giant.

Wolf 359 is, at +13.5m, among the faintest stars in absolute terms ever detected. Discovered in 1918 by German astronomer Max Wolf (1863 - 1932), the star retains his name; the Wolf crater on the Moon is named in his honour as well. Through his career he catalogued 248 discoveries (a record back then) and he also proposed an idea which eventually (after WWI) became the world's first Planetarium.

Leo has a rich array of different types of galaxies, so they get their own table:

There have been several extrasolar planetary systems found in the constellation Leo up to 2007; the first was discovered in 2004. Figures given in the table below are the length of the planet's orbital period around its parent star, which we know of as a year. The mass of the extrasolar planet is compared to that of Jupiter, our Solar System's largest planet; this is known by astronomers as the 'Jovian scale'.

The name Leo is quite popular, either as a full Christian name or a shortened version of Leonard, Leopold or Leonardo. Queen Victoria liked it so much that she named one of her sons Leopold: he held the title Duke of Albany. Up to 1878, 13 Popes had given themselves that Papal name. His Holiness Pope Leo XIII honoured Corsican-born pharmacist and businessman Angelo Mariani with a Vatican gold medal as a mark of his gratitude for the Vin Mariani wine he had made, which contained the (now banned) ingredient cocaine.

Leo Robin, US songwriter (1900 – 1984) wrote 'Diamonds are a Girl's Best Friend' and 'Thanks for the Memory', among others. Leo Blair (named after his paternal grandfather) was the first baby to be born to a serving British Prime Minister for over 150 years. There were a number of Byzantine emperors called Leo. Other notable Leos are the Italian genius inventor, sculptor and artist Leonardo da Vinci, and celebrated Russian writer Leo Tolstoy. And for their many fans, we mustn't forget to mention Leonard Nimoy, Leo Sayer, Leonard Rossiter, Leonardo diCaprio and Leona Lewis!

1Current IAU guidelines use a plus sign (+) for northern constellations and a minus sign (-) for southern ones.2A sickle is a type of blade used for hand-mowing hay or corn.3A light year is the distance light travels in one year, roughly 5.88 trillion miles or 9.46 trillion km.4This figure means 33 million light years.