Constellations: Sagitta 'the Arrow' Content from the guide to life, the universe and everything 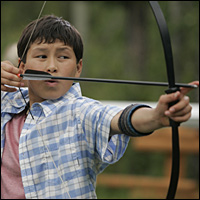 Some folks run, and others hide, there ain't nothing they can do
And some folks put on armour, but the arrows go straight through.
So you see, there's no escape, why not face it and admit
That you love those little arrows when they hurt a little bit?
– 'Little Arrows' by Albert Hammond

The northern star grouping Sagitta (pronounced sa-JIT-ah) was one of Ptolemy's originals featured in his book the Almagest, therefore it is classed as 'ancient'. It is an easily-identifiable arrow shape, visible to the naked eye and quite distinct in medium binoculars. Sagitta shares its borders with Vulpecula, Hercules, Aquila and Delphinus. It is one of the smallest2 of the internationally recognised 88 constellations but it boasts an impressive array of objects to interest the reader. There's a Messier-catalogued globular star cluster to begin the show, and coming up, three planetary nebulae. The whole of Sagitta lies within the more-famous asterism the Summer Triangle, which is made up of the stars Deneb, Vega and Altair. Sagitta transcends a part of the Milky Way known as the Sagittarius Arm, so it displays a glorious backdrop as far as the eye can see. Not only that, in its extreme portion there's an overspill of another arm, this time the one which passes through Lyra, Hercules and Ophiuchus.

Sagitta represents an arrow in flight. There are a good number of stories concerning the small but deadly weapon, so we'll discuss the few more popular versions here. For one of his 12 labours, demigod Heracles (Hercules) had to defeat the monster Hydra. To force it from its lair, Hercules let fly some flaming arrows from his bow. The strongest man in the world also used arrows against the Nemean Lion, but its hide was impenetrable to the metal tips, so Hercules had to strangle it with his bare hands.

The king of the gods, Zeus, once turned himself into a beautiful swan to seduce the object of his desire, Queen Leda, the wife of King Tyndareus of Sparta. While he was in this guise, an arrow was fired at him either by Leda's husband or by Zeus' wife, Hera, who saw through his disguise. The damage was already done though, as Queen Leda conceived two children, Helen (of Troy) and Pollux (half-brother of Castor), born from eggs.

Diana, the goddess of the hunt, used a bow and arrows to stun her prey before delivering the coup de grâce with her hunting knife.

Some say the arrow belongs to Sagittarius, the centaur archer. Was he hunting a swan (Cygnus) or a fox (Vulpecula)? Both constellations are 'within range' of the deadly dart.

There is a mischievous little god who was charged with the responsibility of making humans fall in love so the race would perpetuate. In ancient Greece he was known as Eros, the young son of Aphrodite, the goddess of love and beauty. The Romans knew him as Cupid, whose mother was Venus, their goddess of love. Portrayed as a naked, winged putto3, Cupid fires arrows from his bow at unwary people. The arrows pierce the hearts of his victims, but his aim is not always true, with some of the shafts missing their mark and smiting some other poor soul. Some say this is deliberate, the intention being to make them suffer for Cupid's amusement. This is why not all love affairs have happy endings, or if you suffer from the occasional unrequited love – the arrow was not meant for you.

Stars were catalogued with a Greek letter combined with the genitive form of the constellation in what is known as the 'Bayer designation'. Some stars have proper names as well, for example, alpha Sagittae is Sham. Other stars are known by their catalogue number. More recently discovered stars are assigned English letters: lower case for non-variables and upper case for variables.

Alpha Sagittae is called Sham, the Arabian word for 'the arrow'; it is a yellow giant star. At almost 5th magnitude, it isn't even the brightest star of the constellation, with gamma and delta taking first and second place respectively. Sham has a temperature similar to our own Sun, but it is 20 times the size and 340 times as bright.

A highly unusual star is the variable WZ Sagittae which is a dwarf nova. It underwent an outburst in 1913, and thereby was reclassified Nova Sagittae 1913; it later surprised everyone, as nobody expected a second outburst in 1946! As a result, it had to be logged as a recurrent nova. The next time the star blew was 1978, a very long time between expulsions, possibly explained by the existence of a binary companion which sets off the fireworks at each close encounter. The last super-outburst was in 2001, showing that the time between eruptions is lessening – there may only be one or two more curtain calls before the final curtain.

Deep space objects are ones outside of our solar system. This category includes nebulas, star clusters and galaxies.

The NGC was compiled by John Louis Emil Dreyer (the director of the Armagh Observatory from 1882 to 1916). This was later expanded to include newer discoveries, and is being continually updated as the NGC/IC Project. Other deep-space objects are listed on the Harvard Catalogue created by Harvard University, Cambridge, Massachusetts.

Harvard 20 is an open star cluster with over 30 logged components.

There has been some extrasolar planetary systems found in the constellation Sagitta. Figures given in the table below are the length of the planet's orbital period around its parent star, which we know of as a year. The mass of the extrasolar planet is compared to that of Jupiter, our Solar System's largest planet, known by astronomers as the 'Jovian scale'. HD 231701 b is almost twice Jupiter's mass and orbits so close to its star that life (as we know it) would be impossible. One of the prerequisites in the search for life outside our Solar System is that the temperature should allow for water in its liquid form – this 'hot gas giant' planet ticks no boxes.

In 1988 a pulsar (rotating neutron star) was discovered in Sagitta, it was given the catalogue name B1957+20. It has a brown dwarf companion which is being obliterated due to the gravitational effects - it's akin to being constantly sandblasted. Eventually there will be nothing left of the unfortunate brown dwarf, so its companion is commonly known as the Black Widow Pulsar.

Sagitta Down to Earth

1Current IAU guidelines use a plus sign (+) for northern constellations and a minus sign (−) for southern ones.2Only two, Equuleus and Crux, have a smaller area.3A naked boy, sometimes with wings, who features in artwork - often known as a cherub, although genuine cherubim are much weirder.4A light year is the distance light travels in one year, roughly 5.88 trillion miles or 9.46 trillion km.