Swan Upping on the Thames Content from the guide to life, the universe and everything 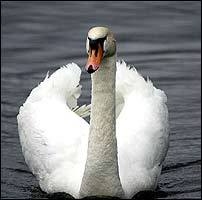 If you are spending some time near the River Thames during the third week of July then you may happen across a ceremony that has been taking place in the UK for hundreds of years. Swan Upping is not as rude as it sounds; the 'Upping' refers to lifting the birds out of the water. This is done in order to perform an annual census of the swans along certain stretches of the Thames and its tributaries to establish their numbers and assign ownership of them.

The History of Swan Upping

The graceful mute swan - a wild bird native to the British Isles - has long been regarded as a banqueting delicacy, and in the 12th Century it was granted royal status. This meant that any swans found on open water were deemed to be the property of the Crown. Swans were also owned by private individuals and kept on private ponds; however, if one escaped it was also adopted as Crown property.

By 1378 the office of 'Keeper of the King's Swans' had been created and a century later a document entitled The Lawes, Orders and Customs for Swans was published. The first law tightened the rules further, so that swans could be kept only by those paying five marks a year Freehold to the Crown, all others being forfeited to the King. It is clear from this that being able to own swans was something of a status symbol in the society of the day.

In order that ownership of swans could be established, the birds were given permanent scars or marks. The marks on the swans made the owners readily identifiable, and in times when there were many private owners, their marks were granted by the Royal Swan Master. Each registered owner had a mark entered into a Registration book, and in the 16th Century there were as many as 900 unique marks recorded. In most cases the marks were made on the upper mandible of the swan's beak, although some were to be found on the lower mandible, leg, foot or wing. From the reign of George III until Victorian times, a mark of three lines across the beak was used to identify royal birds. In the 15th Century ownership rights were granted to two London companies, to be shared with the Crown. These companies were the Worshipful Company of Dyers whose mark included a single nick on one side of the beak, and the Worshipful Company of Vintners whose mark included a nick on either side of the beak1. These companies are the only two to have retained these rights to the present day.

In Elizabethan times the census had to be completed in a single day by the swanherds2 along the river. In order to carry out their duty, the swanherds would drive each family of swans they found onto the bank of the river. They would then lift the birds and look at the beaks and feet of the adults to locate the owner's mark. Any cygnets (baby swans) would have a mark (matching their mother's) made on them using a sharp knife.

The correct marking of birds by officials was taken very seriously and only swanherds could perform the task. Enforcement of the laws was carried out through special 'Swan Motes' or 'Swanning Courts' that were presided over by a chief commissioner and attended by a jury. Driving breeding pairs away from the Thames at breeding time or stealing eggs was typically punishable by a variable fine plus a year in prison. Carrying a swan hook was not permitted by anyone who was not an official swanherd, or was not accompanied by two swanherds; getting caught with one could earn the holder a fine of two thirds of a pound. These courts could also draft regulations for keepers in their area and settled any disputes over ownership.

As well as marking the birds, the laws also compelled owners to have them pinioned. Pinioning is the clipping of the wings to prevent the birds from flying. Animal welfare organisations successfully campaigned for this practice to be abolished in 1978.

For roughly the last century, royal swans have been left unmarked. Queen Alexandra felt that making the marks, particularly some of the older and more complex ones, must have hurt the birds so royal marks were phased out. The Vintners and Dyers still mark the birds but their marks have been greatly simplified. However, swan protection organisations and conservationists believe this practice to be cruel and unnecessary.

These days the Crown retains ownership rights over the birds but these rights are only exercised in a symbolic manner along limited stretches of the Thames, and the birds are no longer eaten. Swan Upping serves a dual purpose; it is both a ceremonial activity and an ecological one to monitor the swan population.

In the third week of July six traditional rowing skiffs set off from Walton-on-Thames and travel for five days, ending up in Oxfordshire. The boats are decked out with flags, two displaying the livery of the Monarch, two for the Dyers and two for the Vintners. The Queen's Swan Marker and the other royal officials wear traditional scarlet jackets making them easy to spot, the Swan Masters of the Vintners and Dyers wear white and blue respectively. Together they make their way upriver to the occasional cry of 'All up!' that indicates some birds have been spotted and that the boats should get in to position to catch them. As the boats pass through Romney Lock, the nearest to Windsor Castle, it is traditional for the Swan Uppers to stand in their boats and drink a toast to the Queen to salute 'Her Majesty The Queen, Seigneur of the Swans'.

When swans are spotted and caught they are weighed and measured and the cygnets are ringed to identify them for future years. The health of the birds is assessed and they are checked over for injuries, most commonly caused by fishing hooks and lines. These tasks are carried out by the Queen's Swan Warden, whose role is scientific rather than ceremonial3.

The warden compiles a report each year on the numbers and health of the swans along the river and trends can be monitored. It was noted in the late 1980s that swan numbers were rapidly declining and conservation efforts were increased. The drop in numbers was blamed on swans being poisoned by the lead weights used by people fishing on the river. Lead weights have since been banned and the population has been gradually recovering. However, swan populations face new challenges; increased recreational use and development of the river can affect habitats, and sadly in recent years there have been increased incidents of vandalism of nests and shootings of swans and cygnets. So it can be seen that as well as providing a bit of quaint English pageantry, Swan Upping has a continuing vital role in the conservation of these beautiful birds.

1This mark is the source of a common but slightly odd English pub name - The Swan With Two Necks. This was originally The Swan with Two Nicks, rather than a reference to a two-headed bird.2Gamekeepers officially tasked with Swan Upping.3At the time of writing the Warden is the Professor of Ornithology at University of Oxford's Department of Zoology.