Constellations: Lyra 'the Lyre' Content from the guide to life, the universe and everything 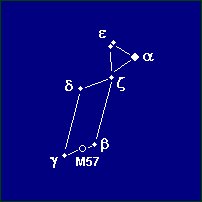 All shattered, low beneath her feet,
The cherished lyre's thrown;
The grief-wind o'er her soul hath swept,
And all the music's flown.
- The Broken Lyre (1863)

Lyra is one of the 48 constellations listed by Greek astronomer Ptolemy, and the 52nd of the modern 88. It is a relatively small constellation bordered by Draco, Cygnus and Vulpecula, with the massive Hercules sharing half of Lyra's borders. Lyra is notable for containing a first-magnitude star, two Messier catalogue objects and many extrasolar planets.

The lyre is a stringed instrument like a small harp. It was supposedly created from the shell of a tortoise or turtle by Hermes as a gift for Apollo, his half-brother. Apollo gave it to his son, Orpheus, who was a talented minstrel and one of the fabled Argonauts. Orpheus was a hopeless romantic who fell in love with a nymph named Eurydice, whom he married. They were very happy together until the demigod Aristaeus took a fancy to the lovely Eurydice. In her haste to escape his advances, Eurydice trod on a venomous snake which retaliated by biting her.

When she died, Orpheus was so distraught that he followed his wife on her journey through the Underworld. Once there he sang and played his lyre enchantingly, persuading Pluto, the god of the Underworld, with his charming verse to allow him to take Eurydice home. Orpheus was granted his wish on one condition, that he did not gaze upon Eurydice until they were above ground. Unfortunately Orpheus couldn't resist looking back to see if his wife was still following him, and she died a second time.

Faithful Orpheus swore he would never love another, and when some wild women of Thrace were rejected by him, they tore him apart in their jealous rage. His decapitated head, still singing its woeful lament, and the accompanying lyre ended up in the river Hebrus. The watching gods despatched the Muses to collect the body parts and bury them at Libethra. Above this grave the birds are heard to sing more sweetly than in any other part of Greece. When Orpheus reached the Underworld he sought out his beloved Eurydice; upon finding her they eagerly embraced. The lovers happily wander the Elysium Fields together, with Orpheus incurring no penalty for his loving gaze. Zeus, the king of the gods, paid tribute to the love of Orpheus and Eurydice by placing the lyre in the sky as a constellation.

In another story, Lyra is one of three birds hunted by Hercules, whose constellation is close by. The others were Aquila 'the Eagle' and Cygnus 'the Swan'. The group were identified with the Stymphalian Birds of Greek legend; the slaying of them was one of Hercules' 12 labours. Lyra was part of the vulture constellation of the ancient Egyptians, enjoying the protection of the goddess Ma'at. In Australian Aboriginal legend, Tyawan, a witch doctor, turns himself into a lyre bird to escape from a fearsome creature called the Bunyip, which still has the power to scare visitors to Australia even today!

The scientific star names are simple to understand (if you know your Greek alphabet). For example: 'alpha Lyrae' means that it is the brightest star in the constellation Lyra. The next brightest is designated 'beta', etc. Combined with the genitive name, this is known as the 'Bayer designation'. Some stars have proper names as well; for example, alpha Lyrae is Vega. Others are known by their catalogue number.

Alpha Lyrae is a very well-known star called Vega, the first star ever to be photographed, on the night of 16 July, 1850, by JA Whipple. Vega is one of the three stars which forms the Summer Triangle, an asterism2 coined by Sir Patrick Moore. Vega is the 5th-brightest star of all at 0.03 magnitude and it has a protoplanetary (dust) disc. It is also known by other names: Dilgan 'Messenger of Light' (Babylonian), Tir-anna 'Life of Heaven' (Akkadian), Wega and 'the Harp Star'. Vega was the North Celestial Pole Star (pole position is cyclical) some 12,000 years ago and will be again in another 10,000 years. The temples at Abydos and Luxor in Egypt were aligned with this star.

Beta Lyrae, Sheliak, is a star system consisting of two stars; a white main sequence star and a less luminous blue-white dwarf star. The stars are a good example of a binary star system, meaning that they share a centre of gravity and appear to rotate around each other. The two stars in this particular system are so close to each other that they constantly pull each other out of shape, and we call this an eclipsing binary system.

M56 (NGC 6779) is a globular cluster. Globular clusters are groups of stars which form a globe, or ball-shape. They are almost as old as the Milky Way itself, and can contain millions of stars. Charles Messier discovered the globular cluster in Lyra in 1779, but it lacked a central bright core, and Messier described it as a 'nebula without stars'. However, William Herschel correctly identified it as a low-emission globular cluster in 1784. The stars range between 11th and 14th magnitude, with an average of 15th mag for the brightest 25 stars. What makes this globular cluster special for fans of Douglas Adams is its girth: its radius has been measured at 42 light years.

In 1779 the French astronomer Antoine Darquier de Pellepoix (1718 - 1802) discovered the Ring Nebula, later catalogued as M57 and NGC 6720. It can be located between beta and gamma Lyrae. We now know the nebula, which is 500 times the size of our own Solar System, is cylindrical in shape.

There have been many extrasolar planetary systems found in the constellation Lyra; the first was discovered in 1999. Figures given in the table below are the length of the planet's orbital period around its parent star, which we know of as a year. The mass of the extrasolar planet is compared to that of Jupiter, our Solar System's largest planet, known by astronomers as the 'Jovian scale'.

Lyra and Vega in Modern Culture

1Current IAU guidelines use a plus sign (+) for northern constellations and a minus sign (−) for southern ones.2An asterism is a group of stars which isn't already a named constellation.3A light year is the distance light travels in one year, roughly 5.88 trillion miles or 9.46 trillion km.4TrES stands for Trans-Atlantic Exoplanet Survey.5When Sir David Attenborough included this lyrebird mimicking a chainsaw, camera shutter and car alarm in The Life of Birds, the encounter was voted the UK's favourite Attenborough moment in a 2006 online poll, taking almost a quarter of the votes.6'James Bond' at the time of writing.