Constellations: Crater 'the Cup' Content from the guide to life, the universe and everything 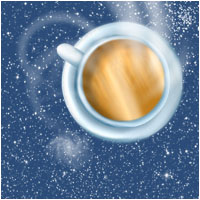 Beyond the rest: he well had been content
Not to have seen, so Lancelot might have seen,
The Holy Cup of healing; and, indeed,
Being so clouded with his grief and love,
Small heart was his after the Holy Quest:
If God would send the vision, well: if not,
The Quest and he were in the hands of Heaven.
– Alfred Lord Tennyson: The Holy Grail

Crater is a small southern constellation with a distinctive tilted 'goblet' shape but no bright stars. It shares its borders with Virgo, Leo, Sextans, Hydra and Corvus.

There's no connection between the constellation and the astronomical features of the same name found on the Moon, which are impact craters from asteroids and meteors. A crater3 is also formed after a bomb explosion; they all derive from the same word for cup or bowl.

Long ago, the ancients first recorded this collection of stars as Creter. Romans referred to the cup constellation as Gratus Iaccho Crater, in honour of their god of wine, Bacchus. In around 150 AD, the Greek astronomer Ptolemy included it in his Almagest - a list of 48 constellations - as the Cinerary Urn, a container for ashes. The vessel in the stars has been connected with Ganymede4, the cup bearer to the gods.

In some cultures the smaller constellations Crater, Corvus 'the Crow' and Sextans 'the Sextant' were the humps on the back of Hydra 'the Sea Serpent'. Since Biblical times the cup constellation is thought by some to honour the Holy Grail, the chalice into which Jesus poured wine to share amongst the disciples at the Last Supper. Another religious connection is the wine goblet of Noah.

In 1600 the Dutch cartographer and astronomer Janszoom Willem Blaeu5 (1571 - 1638) discovered variable star P Cygni (then catalogued Nova 1600 Cygni). That same year, philosopher Giordano Bruno, author of On the Infinite Universe and Worlds (which described the universe as 'infinite, composed of many worlds and animated by common life and common cause'), was burned at the stake for religious heresy. Some time after, Blaeu recorded that Crater represented the cup of Joseph mentioned in The Bible, Genesis: verse 44.

One pious astronomer, German cartographer Julius Schiller (1580 – 1627), published his Christian star atlas Coelum Stellatum Christianum in 1627, just before he died. Schiller basically redrew the ancient heavenly shapes (which he thought were Pagan in origin) as images of Biblical figures. The signs of the Zodiac were replaced by the 12 Apostles. Schiller grouped Crater and neighbouring Corvus (the Crow) together, creating a new constellation to represent the Ark of the Covenant.

One story concerns the god Apollo, who commanded his pet bird (a crow or raven) to fetch him some fresh water from Earth. The hungry bird spied a fig tree that was about to bring forth some succulent fruit, so it waited for them to ripen and had a feast. Knowing it needed an excuse as to why it had tarried, the bird plucked a serpent from the river, then filled Apollo's golden goblet with water. Apollo did not believe the bird's story that it had been attacked by the serpent, and in his fury hurled it, the serpent and the goblet from the celestial home of the gods. Their images came to rest in the night sky above the Earth, the bird (the constellation Corvus) still clutching the serpent (the constellation 'Hydra') in its claws, with the spilled goblet ('Crater') by its side.

In another story, the king of the gods Zeus took a fancy to a young shepherd called Ganymede. Zeus had a habit of changing himself into different creatures in order to seduce the objects of his desire (and hide from his wife Hera). To attract Ganymede's attention Zeus metamorphosed into an eagle. When Ganymede tried to protect his flock by chasing off the fabulous bird of prey, the eagle swooped around and grasped the young man by his shoulders, then carried him off to Mount Olympus. There, Zeus transformed back and made Ganymede his personal slave and the cup bearer to all the gods. When the goddess Hera found out that Ganymede was Zeus' lover6, she was so enraged that Zeus was forced to hide Ganymede in the heavens as the stars which make up the constellation Crater.

The scientific star names are a lower case Greek letter combined with the genitive of the constellation name. This is known as the 'Bayer designation' after the man who devised the system. Some stars have proper names as well; for example, alpha Crateris is Alkes. Other stars are known by their catalogue number.

Alkes, meaning 'the wine cup' or 'shallow basin', is a 4th magnitude orange giant star given the alpha designation by Bayer, even though the delta star is brighter.

The beta star, Al Sharas, is the only other one with a common name. It translates literally as 'the rib', from the days when it was part of Hydra, as it marked the tip of one of Hydra's spines.

Delta Crateris, an orange sub-giant, is the luminary of this constellation, despite its lowly nomenclature.

Gamma Crateris is a binary system, a 4th magnitude white dwarf which has a faint +9.5 companion.

The NGC was compiled by John Louis Emil Dreyer (the director of the Armagh Observatory from 1882 to 1916). The only NGC objects in Crater are distant galaxies. NGC 3887 is a clockwise spiral which has some elongated arms and a mysterious gap. Some astronomers think this is a clue to a past interaction; the larger galaxy absorbed a smaller one and the gap has almost closed. Eventually gravity will ensure there will be no evidence of the galactic cannibalism left behind. NGC 3513 is a barred spiral which appears to have misshapen arms, possibly it is being distorted by close neighbour NGC 3511. NGC 3981 is a clockwise spiral with elongated arms, estimated at 80 million light years distance. From our vantage point it is viewed practically edge-on. Another edge-on spiral is NGC 3511 which is 42 million light years away.

The space debris which creates a meteor shower comes from the tail of a comet, as the Earth crosses where the comet passed previously on its own orbit. Imagine a trail of breadcrumbs, or sawdust like that used in hashing. The meteor shower connected with this constellation is called the Eta Craterids. It appears between 11 and 22 January. Although the ZHR (Zenithal Hourly Rate) is only four, the display produces some bright meteors.

There have been extrasolar planetary systems found in the constellation Crater. The table below shows the length of the planet's orbital period around its parent star, which we know of as a year. The mass of the extrasolar planet is compared to that of Jupiter, our Solar System's largest planet, known by astronomers as the 'Jovian scale'.

BD-10°3166 is a yellow dwarf with approximately the same mass as our own Sun. It's so insignificant that it wasn't included in any of the main star catalogues, but the California and Carnegie Planet Search discovered a planet in orbit around it in 2000. The planet, BD-10°3166 b, is a gas giant, half the mass of Jupiter, and it orbits extremely close to its parent star.

Cups in the Edited Guide

1The Greek word krater means 'mixing vessel'.2Current IAU guidelines use a plus sign (+) for northern constellations and a minus sign (−) for southern ones.3A small crater is known as a 'craterkin'.4After whom one of the Galilean Moons of Jupiter is named.5Also known as Jansenius Caesius.6Ganymede is the name of the largest moon of Jupiter (the Roman name of Zeus). Ganymede is larger than Mercury, our Solar System's innermost planet. Jupiter's moons are all named after Zeus' many lovers.7A light year is the distance light travels in one year, roughly 5.88 trillion miles or 9.46 trillion kilometres.8A feat since equalled by Roger Federer.