Telling a Tall Tale - A Primer Content from the guide to life, the universe and everything 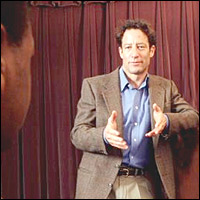 But - but go on, Uncle Henry! What happened?

I thought you knew. Why, your 'ol Uncle Henry was killed! You didn't think a man could survive a fall like that, now did you? I was killed!
- Sometimes a Great Notion, Ken Kesey

What idle gathering, be it around a campfire, at a water cooler or under a shady tree, would be complete without the telling of tall tales? It is a pastime as old as fishing and, just as with fishing, there is no subject so small it cannot be made into a whopper.

Tall tales are to stories what the pun is to jokes and the limerick to poetry. Lowbrow. But, more than that, a really good tall tale incorporates certain essential elements without which it would merely be a pack of artless and pathetic lies. Or, worse, a joke.

Here, then, is what you need to know.

It is Not a Joke

A joke contains only two essential elements: the set-up and the punchline, viz:

A grasshopper walks into a pub and the bartender says: 'Hey, we've got a drink named after you.' (the set-up)

The grasshopper says: 'You've got a drink named Bob?' (the punchline)

The basic tall tale has only the set-up in common and there the two diverge forever. So, if your tall tale ended with a punchline, you have probably told a shaggy dog story instead and that is even lower than a pun - shame on you.

To be sure you are telling a tall tale, do this instead: set the audience up, deliver the nub, bring it home, offer some stupid proof, and all the while provide equally stupid defences against the audience's mounting disbelief. (You need an audience, of course, but more on that later).

How should you start, then? Well, if you are a beginner, a good rule is to tell the story in first person. So, no matter where or when the story takes place, you were there. It does not matter if you begin with: 'A hundred years from now I was tending the bar when who should walk in but...' or 'I lived up in Pompeii, and you have to remember that was almost a 1,000 years ago and volcanoes had not been invented yet, so my job was to...'

Just be bold, be unapologetic, and be there.

As an example of this primer, let us suppose you want to tell a story of how an airport was built over your favourite fishing spot and in protest you went fishing there anyway. You managed to somehow snag an airplane and, after a great struggle, you landed it. All well and good - the set-up, then, will cover the fishing spot and how terrific it was, and how distraught you were when you arrived one day as usual but found an airport there instead. It is always a good idea to throw in some actual facts at this point. You might say: 'Everybody knows that the first runways were built at Heathrow in 1944, but not many know what was there before. I do, because I used to fish there in the best pond that ever was.'

Actual stories may vary, and this is only an example.

Delivering the Nub and the Importance of Being Earnest

The nub is the essential part of the story, and the whole point of it. In our example, it is the big catch.

During the set-up, you have been ramping up to this. With mounting anger and frustration, you have been watching the airplanes circling overhead, when the idea to snag one occurs to you. Sure, it is illegal and only fly fishing is permitted, but you pull out the big treble hook that you have been keeping hidden, get out your £100 test line, knot the hook, send it flying into the school of airplanes, and tug hard. Now the story should quite literally take off, and now is not the time to hold back - so up and off you go.

Do not joke, do not laugh - this is serious business. You are now hanging by a filament and your life is in peril. Bring your audience with you. Describe the air rushing past at 200mph, the impact an insect makes at that speed, the mixture of exhilaration and raw terror, followed by the sense of power which comes with the realisation that your hook caught the right aileron and you can actually control the plane. It struggles, of course, but you play it, you tire it, and you grimly reel it in.

The natural question at this point is: 'What happened then?'

Remember that you are the storyteller, you are in charge, and anything can happen next. However, also keep in mind that it is time to ramp things back down. Perhaps the plane got tangled in some power lines and you could not get it free, and finally had to cut your line. Perhaps you made a perfect three-point landing and after a quarter of a mile you brought it to a stop with only an eighth of an inch of sole left on your shoes. It is not terribly important, except that you are leading up to the stupid proof and you want to be prepared.

Now it is all over bar the shouting. Not actual shouting, mind. Audiences are usually too polite. But you are asking them to believe quite a lot and it is only fair that you offer proof.

Did you have to cut the line? Then you better have thought to have a pocket knife with you. Hold it up and, with utmost gravity, tell the audience this was the very knife you cut the line with.

Did you wear out the soles of your shoes bringing the plane to a halt? Then you had better either have an old worn pair on so you can show them the paper-thin soles, or a new pair so you can say these are the ones you had to buy to replace them. Or else they were confiscated by airport security and you had to replace them with the ones you have on now. So that proves it.

You get the idea.

It should not come as any surprise that the audience will, from time to time, look at you as though in utter disbelief. Children are even more prone to outrage because, until now, they have only suspected that adults lie. You need to reassure them. Let them know you would rather eat a whole tub of ice cream than tell them something that is not true. If you are sporting a beard, let them know it is to keep you from telling bald-faced lies. Give your tale some thought and be as well prepared as you can.

People, especially children, will tend to let the larger issues go and focus instead on the smaller points. For example, suppose it was a tale about catching a catfish in toilet bowl. Inevitably, someone will ask what a catfish was doing in the toilet bowl in the first place. Well, everyone knows catfish are bottom feeders.

So, where to find one of these? Surprisingly, you make a perfectly good audience yourself, particularly if you have never told a story before and prefer not to embarrass yourself in front of someone else just yet. Tell your tall tale in front of a mirror - it will really help you to work up some good facial expressions. Then, when you have your story memorised and have gained some confidence, it is time to corral your family and friends. It is not that they will be particularly kind or supportive, only that they have a harder time avoiding you.

When you feel ready for a real audience, hold off on busking for a little while. See if you can find a local group of storytellers. There are actually more of these than you would think, and people in them tend to be very supportive of beginners, whereas Joe Public is generally not so.

Are you aware that there are storytelling festivals? These are great because, in addition to the regular events, all kinds of people gather round in groups off-stage and swap stories. It is a chance to hone your skills as well as pick up new ideas. Plus, you can get up on one of the stages when it is not in use and pretend you are the featured attraction. It is all part of getting used to performing. Need we say it? Practise, practise, practise.

Once you have gained your confidence, you are ready for anything. Try all venues; you will learn a great deal as a result. Try open mike nights (just carry a guitar with you and pretend to be trying to tune it, all the while telling your tall tale. When you are done with the tale, pretend to give up the tuning and leave the stage - hopefully to a smattering of bewildered applause). Try classrooms - teachers are always looking for diversions for their charges and will welcome you with open arms. Plus, if you can succeed with a group of children, you can succeed with any group.

OK, we have got all the parts, now put them together and hit the stage. First, we find a great, whopping tall tale, even if it kills us. In fact, so much the better if it does. Now then, all performers know that visualising a success is the key to being successful, so do it:

There we were on stage. We found an audience, they waited expectantly, we set them up, they bought it, we delivered the nub, they gaped, we brought it home, they cheered, we offered a gloriously stupid proof, they stood up and stamped their feet...

...and the house came down.

We died, of course, and our tale is all we have left, so we tell it to anyone who will listen.