Horse Chestnut Trees Content from the guide to life, the universe and everything

Several species of the family Hippocastanaceae can be referred to as horse chestnuts, but in the British Isles it is understood to mean Aesculus hippocastanum. This tree is native to the Balkans and was introduced to the British Isles early in the 17th Century1. Often found in parks either as a specimen tree or as a member of an avenue, it can live for 150 years and grow to a height of 25 metres2. Its bark, when mature, is scaly.

The Horse Chestnut in Winter 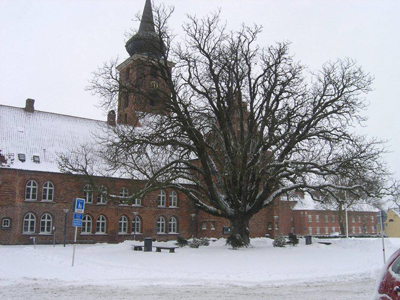 All the branches of the tree curve gracefully upwards in winter. Horseshoe-shaped leaf scars are clearly visible at the base of a branch or twig; these may be the origin of the English name for the tree3. Each branch bears sticky brown buds in opposing pairs along its sides, topped off by an apical bud. The sticky sap, together with the bud scales, protects the buds from frost and insect damage.

The Horse Chestnut in Spring

In February or March, these buds open out into palmate leaves. Each leaf has five or seven leaflets with serrated edges. Weighed down by foliage, the crown of the tree gradually opens out in spring and summer.

The cool shade provided by chestnut trees led to their being planted above beer cellars in Germany. The shade was soon favoured as a place to drink beer as well as to store it, and the beer garden was born.

In April or May, the horse chestnut goes into bloom. Each candle-like inflorescence is made up of many four-petalled white or, in one variety, pink, flowers with a slight scent. The white variety has hints of red and yellow.

The Horse Chestnut in Summer and Autumn 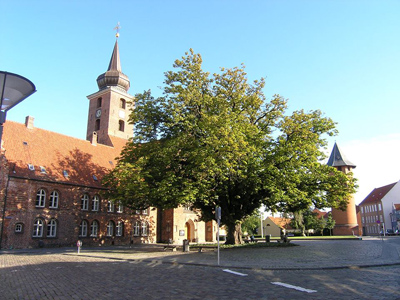 When pollinated, the flower develops into a fruit with a spiny green shell that usually contains two seeds, or conkers. Mature fruit falls to the ground from September, the shell often breaking on impact.

These are traditionally strung individually by children and bashed together in the game of the same name. Whichever conker survives the collision unbroken wins, and may go on to other battles. A conker which has won once is known as a 'one-er', a two-time winner as a 'two-er' and so on.

Conkers, unlike the seeds of the sweet chestnut, are not easily edible, as they contain poisonous saponins, along with aescin, which can cause vomiting and paralysis. They can be rendered safe by crushing and leaching with water, or by slow cooking, but the remaining food is largely starch.

Experiments in England during the First World War showed that conkers which have been crushed, leached with water, and boiled can be used as fodder for cattle and sheep, though pigs will not eat them.

Fluid extracts of the fruit and bark of the plant, and sometimes of its leaf and root, are used in herbal medicine.

1Exploring Dublin: Wildlife, Parks, Waterways, by Christopher Moriarty, 1997.2Trees, by Macgregor Skene, 1927 - a metre is approximately equal to a yard. 3Other theories suggest a derivation from Welsh, or from use in veterinary medicine.