Conkers Content from the guide to life, the universe and everything 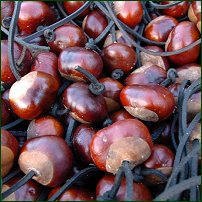 Julius Caesar could have famously said of Britain:

I came, I saw, I conkered

Except of course he didn't because the horse chestnut tree was only introduced into Britain in the 1600s and the first recorded instance of a game of conkers being played wasn't until 1848. This begs the question what small boys (this is an almost exclusively male activity) did up to that time when the nights drew in, the air got cold, and they wanted some way of conveniently breaking their best friend's knuckles without starting a fight. For over a hundred years now, however, there have been conkers.

Conkers, the small brown objects, are the seeds of the horse chestnut. Conkers, the pastime, is a game of skill and sublimated violence for two players. Each player is equipped with a conker, through which a hole has been drilled to allow a piece of string to be threaded. The string is knotted to prevent the conker coming off, and the game may commence.

Whoever goes first may be decided by coin toss or priority. For example, the owner of a 'sixer' (ie, the victor in six previous games) will have priority over the owner of a mere 'two-er'.

The receiver holds up the hand, dangling the conker on the end of its string. The other player then attempts to hit the dangling conker as hard as he can with his own conker by swinging it overarm. If he hits, he gets another go. If he misses, play switches and the receiver gets a crack at his opponent. This continues until one or other of the conkers is so damaged that it falls off the string. The winner can then add the loser's conker value to the victory count of their conker, turning the above mentioned sixer into an eighter.

There are many arcane rules of conkers to do with glancing blows, hits on the string, specific techniques and so on, but they are very variable, and so are beyond the scope of this entry.

Conkers are typically harvested in early autumn. The usual method is to find a good conker tree in a park or by a road and then stand under it throwing sticks up into the branches hoping this will dislodge the ripe fruit. Since the fruit is contained within green pods covered in sharp spines, there is a frisson of danger to this activity which most likely explains some of its appeal. It's often better to find conkers on the ground, as the ones on the tree probably won't be ready. It is worth noting that early in the autumn of 2001, Norwich City Council decided that this activity was too dangerous, and took steps to prevent children collecting conkers from several trees in the city by cutting them all down - this actually made the BBC Radio 4 main morning news show Today.

There are those who mutter darkly about methods of treatment for conkers which are guaranteed to turn even the weediest, most brittle loser into an all-challengers champion twelver. Such methods usually involve things as a week soaking in vinegar, several hours of slow steady baking in a low oven, leaving them in the drying cupboard for a year or two in a cloth bag, or other more obscure chemical treatments such as the application of nail varnish. This Researcher can offer no authoritative advice on this subject other than to encourage players to experiment.