Fishing for Beginners Content from the guide to life, the universe and everything 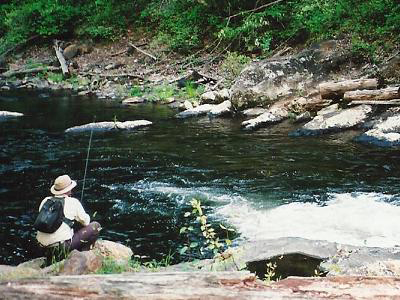 You don't really need to know much to get started with that most peaceful of pastimes - fishing. So, you can add the following knowledge to the little you may already have, and you could end up actually catching a fish.

Start with the basics. You'll need a rod and reel. Get a fairly cheap one with a 15 - 20lb test line. You're a beginner and you need something that will handle everything from bluegills and sunfish to catfish and bass. Since you are a beginner, don't even bother with trying one of those spindle reels, it will waste your time. You shouldn't have to spend more than £20 (US$30).

Every fisherman has a tackle box. You'll need one at some point to at least keep the different hook sizes apart. If you do not feel like spending money on a tackle box, you can get away with used pill bottles for storing hooks. Keep your hooks dry and they will remain rust free. If you selected your rod as part of a beginner's package, it will come with a variety of hooks, lures, bobbers, sinkers, swivels and other stuff. Attach a snap swivel to the end of your line. It will allow you to change hooks for the size of the fish you think you are going to catch.

There are any number of ways to tie a knot for your swivel on your line. One way is to start by putting the line through the hole in the swivel. Twist the string five or more times. Put the line through the hole that exists above the swivel and pull the knot tight. If you did it right, the knot should be thin and snug against the swivel and you can cut away the excess line. If it wasn't done correctly, you can try it again, or try something else you think would work.

Don't forget to pick up a fishing license for where you intend to fish. These can be obtained at any fishing equipment store. In the state of Iowa, USA, you can expect to pay at least $10 for the license, and it's much better than being fined for fishing without a license. In the USA, the license will last for an entire year, and will apply to the entire state.

Wear a complete layer of sunscreen. You don't want to be turned into a lobster while trying to catch a fish.

Polarized sunglasses are helpful as well for a couple of reasons. First, they cut the glare from the water allowing you to see what's underneath the surface. Secondly, they will reduce eye strain from too much sun.

Since you are going to use worms, you'll need to add some weight to the line, or else it will just float on the top of the water. Sinkers come in a variety of weights and materials. A metal sinker is easiest to put on your line, because all it takes is a pair of pliers. Place the sinker on your line and squeeze it into place on your line with the pliers. Use a bit of trial and error to see what weights work best and how many you need.

Now you can't just throw the hook into the water, because fish are not stupid. You need to entice them with food. Try using worms. In the USA, worms can be picked up from a bait dealer for about $2 per dozen. They will most likely come in a Styrofoam coffee cup with a lid. If you have never put a worm on a hook, prepare to feel the worm squirm in your hand.

There is a way that will introduce you to the worm, and slowly get you used to putting a worm on the hook. You will be squeamish. First, try to dig one to the top of the cup. If you need to, remove the dirt from the top to find them. Once you got one to the top, you can use the side of the cup to spear the worm with your hook. That way, you don't even have to touch it when it starts really squirming. You will also need to wind the worm around the hook and continuing to put the hook through the worm, until the hook is mostly covered by the worm. You will most likely have a lot of the worm left over. You can either try to pull it apart, or you can use the edge of the cup like a butter knife and cut the worm. As long as there is a bit of dangling and wiggling worm, you have an enticing feast for the fish.

Use a bobber on your line. For the beginner, this is definitely the way to go, as you cannot possibly feel when a fish is nibbling at your lure. Always remain vigilant to your bobber, because when that thing goes into the water even just a little bit, that is a fish trying to eat your worm. The goal is to get the fish to take the hook, so when the bobber shows a fish attacking your worm, then you need to give a little tug on the line. If you haven't been paying attention to your bobber, reel in your hook, as you will no doubt find it cleaned of food. A good place to put the bobber on your fishing line is about one to two feet from the hook.

Casting - The Art of Putting your Lure in Water

Casting is not intentionally difficult. Using only your wrist, press the casting button as you bring the rod back. As you bring the rod forward (still using only your wrist), release the button. The hook and worm should then goofily orbit the bobber in the air as it lands in the water. If it didn't go anywhere, make sure you released the button. If it fell behind you, make sure you didn't release too soon. If it went too far, you can either press the button again to stop the flight, or don't try so hard next time.

Once you've casted, give the reel a turn and take up the slack. The waiting game has begun. Think you got something nibbling? Take up a little slack, or give a little tug on the line. Think there's something on the hook? Reel it in and see.

Picking a place to fish can be hard at first. Experience will help determine location, but a good place to start is on a small pier or off the shoreline. If you have been fishing for an hour and nothing has even touched your bait, you can always move to another location. Perhaps you could move closer to where someone is actually catching fish. Or, if you have your polarized sunglasses, maybe you could try to spot the fish in the water. Just remember that the amount of equipment you have with you will make moving to another location all the more difficult.