London Heathrow Airport (LHR) Content from the guide to life, the universe and everything 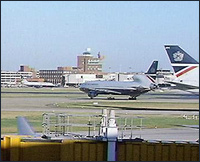 Often known as simply Heathrow, the west London airport is one of the busiest and best-connected global aviation hubs. Heathrow has more international passenger movements than any other airport in the world, although in terms of total passenger traffic it is third behind Hartsfield-Jackson Airport in Atlanta, and O'Hare Airport, in Chicago. More than 90 airlines are based at Heathrow, and it is the second busiest cargo centre in the world. The largest centre of employment in Europe, Heathrow is one of the few airports that is as well known by its IATA (International Air Transport Association)airport code ('LHR') as its real name.

Heathrow began life in the 1930s as the Great Western Aerodrome, and took its present name from the 'Heath Row' hamlet that was destroyed to make way for the airport. Heath Row stood right in the heart of the airport site, near what is now Terminal 3.

Up to the outbreak of World War II, Heathrow was overshadowed by Croydon Airport, which was the principal airport for London at the time. However, the two-year period from 1944 to 1946 saw some questionable actions by Government ministers (specifically Harold Balfour, then Under-Secretary of State for Air) resulting in Heathrow coming firstly under the control of the Ministry of Air, and then less than two years later being handed over to Ministry of Civil Aviation (predecessor of the Civil Aviation Authority). Heathrow fully opened for civilian use on the 31 May, 1946.

By 1947, Heathrow had three runways with three more under construction1, although these were shorter - designed for piston-engined aircraft - and criss-crossed the site to allow for different wind directions. 1953 saw Queen Elizabeth II ceremonially place the first concrete slab of Heathrow's first modern runway, and she returned again two years later to open the Europa Building. Shortly afterwards the Europa Building was joined by the Oceanic Terminal, and these were renamed Terminal 2 and Terminal 3 respectively when Terminal 1 joined them in 1968. This created the cluster of buildings that is central to the airport (in more ways than one) even today.

Extensions to the London Underground in 1977 saw the Piccadilly Line link Heathrow to Central London in just under one hour, and the Piccadilly Line was again extended to link up with the new Terminal 4 in 1986. Terminal 4 was built away from the other three, located adjacent to the Southern Runway, and resulted in the creation of a new spur road from Junction 14 of the M25 London Orbital Motorway. T4 became the home of the newly-privatised British Airways.

As Margaret Thatcher continued to privatise British industries, the British Airports Authority was publicly listed under the name BAA plc. (the company stresses that this is not an acronym - BAA does not stand for anything), and took control of seven of the UK's airports2, including Heathrow.

Heathrow currently consists of four passenger terminals and one cargo terminal, and is responsible for around half a million takeoffs/landings per year. This translates to around 65 million passengers every year, soon to rise to over 90 million once Terminal 5 opens in 2007. The original six runways have been replaced by two full-length (more than 3.5km) paved runways, running parallel in an east-west direction either side of the central three terminals. Little-known to even the most well-travelled observers is that Heathrow actually has a third runway already - a 2.3km-long strip running at a bearing of 40 degrees from the southern boundary of the airport, across the southern runway, east of the central complex, and across the northern runway. This runway runs cross-wind, and is very seldom used nowadays.

In terms of accessibility, Heathrow is again at the forefront of airports worldwide, with a higher proportion of passengers using mass transport to arrive at the airport than any other airport in the world. 25% of Heathrow's passengers arrive by rail, and another 15% by bus or coach. Increases in recent years have put the airport well on track to reach its long-term objective of 50% of all passengers arriving by public transport.

By road, Heathrow is located adjacent to two major motorways, with the M4 spur to Terminals 1,2 and 3 and the M25 spurs to Terminal 4 and, when it opens, Terminal 5. Major roadworks are currently in operation on the M25 London Orbital to make the motorway ten-laned between Junction 12 (M3)and J14 (Terminal 4), and 12-laned between J14 and J15 (M4, Terminal 1-3 Spur), in anticipation of greater traffic once Terminal 5 opens.

In terms of train, Heathrow has been served by the London Underground (also known as 'The Tube') since the Piccadilly Line was extended to Terminals 1, 2 and 3 in 1977, and the line was extended to Terminal 4 when it was built. A new spur has been created to link to the up-and-coming Terminal 5 too. Since 2003, the Underground has faced competition from the Heathrow Express, which runs fast trains direct from Paddington Station in Central London to Heathrow 'in 15 minutes, every 15 minutes'. This is considerably quicker than the Tube, but significantly more expensive (costing around £15 per person). The Heathrow Express line cost £750m and was funded by BAA with the aim of reducing car numbers into the airport by 3000 per day. Even more recently it has been announced that there will be another option for passengers, with the Heathrow Connect service - a joint venture between BAA and First Great Western - beginning on 12 June, 2005. This will use the same line as the Express, but will feature a stopping service3 taking around 25 minutes from Paddington to Heathrow.

Since its 1987 privatisation, BAA has owned and run Heathrow as a private company, but its monopoly position has resulted in heavy regulation by the Civil Aviation Authority (CAA). As a result, the amount BAA are allowed to charge airlines landing at Heathrow is carefully monitored - until April 2003 price increases were capped at inflation minus 3%. Due to low inflation, this resulted in falling landing costs in absolute terms - the average of £6.13 per passenger was roughly the same as that at Gatwick and Stansted. However, since 2003 the CAA has given BAA permission to raise landing costs by inflation plus 6.5% per annum until 2008, reflecting the fact that Heathrow's premier position as a global hub makes it more popular with passengers and airlines. The increase also helps BAA fund the Terminal 5 development, which is being funded entirely privately - this is unprecedented in global aviation.

Despite being one of the busiest airports in the world, Heathrow operates significantly below its potential capacity. Primarily, the two runways are not used simultaneously for landings and takeoffs - all landings will be at one while all takeoffs will be from the other. The role of each runway is switched during each day, conventionally at 3pm local time, to reduce noise pollution affecting houses below the approach or takeoff paths. On top of this, night-time flights are restricted by Government Order, and could be banned altogether should the European Court of Human Rights uphold a recent judgement against HM Government. These systems significantly reduce the potential capacity of Heathrow, and have contributed to the inevitable 'circling' that is commonplace for aircraft arriving at Heathrow. There are four 'stacks' (holding areas where inbound planes are queued in a spiralling pattern) serving Heathrow - Bovingdon (NW London), Lambourne (Essex), Biggin Hill (SE London) and Ockham (Surrey).

Immediately before us, at the time of writing, is the dawn of Terminal 5 - the colossal feat of logistics, engineering and architecture that is currently the largest construction project in Europe. If it were its own, standalone airport, Terminal 5 would be the fourth largest in Europe, and as part of Heathrow it propels the UK into 21st Century Aviation. Unlike Heathrow's other four terminals (with the possible exception of the British Airways World Cargo Centre), Terminal 5 is an architectual masterpiece - a single 400m by 175m concourse with a waveform roof forming the principal structure, and two 'satellite' concourses being linked underground.

Another feat of modern aviation - the Airbus A380 'Superjumbo' - has resulted in airports worldwide having to invest in wider runways and taxiways, as well as new stands with more than one entrance/exit tunnel. BAA are creating a new arm at Terminal 3 to welcome A380s, and Terminal 5 will have the ability to house several A380s as well - with upgrading the airport well underway4 LHR is going to be one of the few airports in the world that has the ability to cater for the A380 when it is commercially launched in 2006. Despite British Airways' reluctance to invest in the superjumbo, Heathrow is likely to have more A380s on its tarmac at a given moment than any airport in the world - BAA forecast that by 2016 one in every eight flights landing at Heathrow will be an A380. The first commerical A380 flight will be by Singapore Airlines from Heathrow to Singapore.

With Terminal 5 being built on the far western side of the site, the old control tower had a restricted view and was growing redundant in the modern world of aviation. Thus BAA have built a new control tower, assembled on the airport's periphery near Terminal 4, and then moved across the airfield to its resting place in the centre of the site. Here it has been lifted to its final height of 87 metres, making it the highest tower of its kind in the world. The new tower will be fully operational by 2007.

The Future of Heathrow

Even before Terminal 5 approaches completion, there have already been substantial calls for further development of Heathrow, citing the importance Heathrow in particular has for the UK's economy. The 2003 Government White Paper proposed a third runway to be built at Heathrow by 2020, provided that BAA meet EU targets on aircraft noise and air pollution. To this effect, a Heathrow 'congestion charge' similar to that employed in Central London seems to be a distinct possibility.

A campaign group called Future Heathrow5 has been set up to lobby for the continued expansion of the airport, to include a sixth terminal along with a third runway, all to the north of the existing site. The group consists of an alliance of politicians, airlines, the CBI and trade unions. The fighting point is that European rivals such as Paris Charles de Gaulle, Frankfurt and Amsterdam-Schiphol all have the potential to surpass Heathrow as Europe's premier airport in the near future, and continued investment is 'critically important' to the future economic prosperity of west London and the Thames Valley/M4 Corridor.

In the meantime, the airport continues to be used by thousands every day, and each terminal has developed into a shopping centre in its own right. Things to do if you are stuck at Heathrow are plenty, and if all else fails, the new Terminal 5 will offer 'unrivalled views of the airfield' for any passengers wishing to get a first-hand view of the logistical miracle that is Heathrow.