London, UK Content from the guide to life, the universe and everything 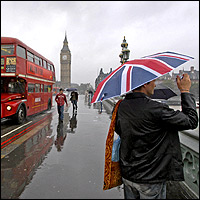 Why, Sir, you find no man, at all intellectual, who is willing to leave London. No, Sir, when a man is tired of London, he is tired of life; for there is in London all that life can afford.
– Samuel Johnson

London is in the south-east of England and is the largest city in the country as well as being the capital city for the whole of the UK. It was once the capital of the entire British Empire and the busiest port in the world in the late 19th Century. It is one of the world's major cities and has around seven million inhabitants who speak over 300 languages between them. It is one of the most densely populated areas of Western Europe.

London has always been disproportionately big - it has been, since the Middle Ages, much bigger than any other British city, in a way that's quite unusual for most European countries. By the late 16th Century, London was not only the biggest city in Europe, but was twice the size of the second-biggest, Paris. The next biggest city in Britain, Bristol, was only around the 250th biggest in Europe.

Although it was established as the administrative centre of the Roman province (later York became the centre of a second province, Britannia Superior), this prominence seems to have been completely lost in the period of Anglo-Saxon dominance which followed, when Britain was divided into seven (and sometimes more) independent kingdoms.

In the latter part of the Anglo-Saxon period (often called the Dark Ages), Winchester was the dominant city in the partially-reunited kingdom of England, whereas London was an important commercial centre but not the administrative 'capital' (although we can't really talk about an English 'capital city' at all during this period of peripatetic royal courts).

It was not really until the arrival of William I's Norman invaders that London began to take on its modern role as first city of England. London was his first destination, and it was in London that he was first confirmed and crowned as king.

Central London itself isn't that big, although walking from one side to the other can take some time, but the boroughs surrounding it really make it grow. It covers 625 square miles and is made up of 33 London boroughs, each run by their own council. It's only fairly recently that all the various boroughs have been incorporated into London - in that the city flows seamlessly between them. A few hundred years ago, there were acres of farmland surrounding the City and numerous small villages. The farmland has now been developed and the villages absorbed into the Greater London area, although many of the village names are still used for those districts today .

The original difference between the 'City of London' and its immediately neighbouring boroughs, or surrounding districts, is that 'The City' is an independent legal Corporation, with its own Lord Mayor and Aldermen, formerly composed mostly of the City's financial doyens and the leaders of the City's old Craft Guilds (if not entirely so today). The City covers approximately one square mile. This is the financial heartland of the wider London conurbation and the UK, and also, to a limited extent, of the western world and of many global interests. There is another city, the City of Westminster, in the general vicinity of 'The City' itself. If you walk around those areas many of the old cities' limits are apparent as an addendum to local street nameplates. The (comparatively new) office of the Mayor of (Greater) London does not include the City of London itself as a part of its administrative responsibility.

It was named 'Londinium' by the Romans when they invaded in 43AD, although some sources say that this is a Celtic name, not a Latin one, and was already in place (possibly referring to a local farmstead) when the Romans arrived.

It is one of the three largest financial centres in the world - every major bank and financial institution has a significant presence here.

It is the most diverse city in the world, celebrating the Chinese, Sikh, Bengali and Hindu New Years as well as the Western New Year.

It contains 42 universities and higher education institutions and is the most popular destination for students who choose to study overseas.

London is also home to the British Library, which is the world's biggest library with three million new items being added each year.

The City of London is (historically) prone to laws that have nothing to do with the rest of the country. For example, in, say, the 17th Century, if you were wanted on criminal charges in the rest of the country, you were safe in London. And Shakespeare and his contemporaries could not have erected their theatres in the City, which is why The Globe and The Rose and The Theatre were located on the south bank of the Thames (as the modern Globe is today).

London has seen some wild times in the past. Here are just a few of the highlights.