The British Library Content from the guide to life, the universe and everything 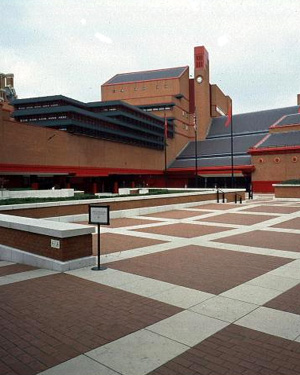 For many years the British Library has been among the world's leading resources for scholarship and general research. Karl Marx is just one of a number of celebrated, and not-so-celebrated, thinkers and heretics who, over the years, have availed themselves of this unique facility. Now comfortably ensconced - at long last - in its new home at St Pancras in central London, the library is comparable with other great national institutions such as the American Library of Congress and the Bibliothèque Nationale de Paris.

Since the library opened in 1997 the response to the design from readers has been very favourable. The Reading Rooms are comfortable, well lit and beautifully spacious - and, of course, almost completely silent: there is a ban on mobile phones and the insulation shuts out the noise of the traffic from Euston Road. In fact, the library has been an aesthetic as well as a practical success from the point of view of the average reader, although of course some will always pine for the lovely old North Reading Room at Bloomsbury1. There's no pleasing everyone...

Although most of the various component parts of the library have existed in one form or another for more than a century, the idea of bringing them together to form a single unit is a relatively recent one. In fact, it is only since a 1972 Act of Parliament that they have officially been considered as a single entity at all - before then the various libraries were simply separate institutions in their own right, dispersed in various areas around London. In 1951 the County of London first considered the possibility of moving the old humanities resources out of their home in the British Museum at Bloomsbury and into a building of their own.

Originally, there was a plan to construct a new building near the British Museum. However, the lack of space for future expansion and a growing desire to see the various sections of the library united in a single collection led to the selection of a new site a few miles up the road at St Pancras. The inevitable problem of future expansion has been resolved by the fact that the library also owns the patch of wasteland to the rear of the building, and this has been earmarked for storage and other purposes in the future.

After more than 30 years of political, economic and other assorted wrangling, the project finally reached its completion. The new library opened its doors to readers in 1997, to the general public in 1998, and finally completed all its moving around a year later in 1999. Currently, all the diverse collections (that were previously known collectively as the British Library in name only) are housed on this one single site2. The British Library at St Pancras consists of resources drawn from all over London, including the material from the British Museum and the science resources from the old Patent Office in Chancery Lane.

The building was designed by the architect Colin St John Wilson. It is characterised by an asymmetrical shape that reflects the varying needs of different kinds of readers in the different parts of the building. The building has a red-brick facade that was designed to complement other well-established features in the surrounding environment. For example, the bricks were specially chosen and came from the same quarry that provided the bricks for the adjacent St Pancras station, a rather ostentatious Gothic structure built in the mid-Victorian period when such things were still in fashion.

The Piazza to the front of the building provides a welcome break from the busy Euston Road outside. It also serves as a public space in its own right, being openly accessible to the public and providing a place for activities such as occasional poetry readings and other small-scale performances in the small amphitheatre to the front of the Piazza.

There are a number of free exhibitions at the British Library permanently on view to the public. There is a gallery with national and world treasures on view such as Magna Carta, Shakespeare's First Folio and the Lindisfarne Gospels. Another area has been set aside for temporary exhibitions. There is also a kind of 'workshop' which enables visitors to have a go at some of the more practical elements involved in putting a book together.

The King's Library is an interesting curiosity. Its contents, the library of King George III, were given to the British Museum in the 19th Century by his son, King George IV, on the condition that they should remain on view to the public (not just to privileged readers) at all times. Bearing in mind that some of the material is very valuable, this prerequisite was a complication that the architect Wilson had to solve. He overcame the problem by putting the collection in a large, tinted (locked!) glass case rising up to the central part of the library from the ground floor to the upper levels. It thus symbolises the immense collection underground, and also serves a working part of the library itself. The books themselves, of course, however, can only be studied in the Rare Books Reading Room, by those with a special pass.

With the exception of the open access science material and some humanities reference books (see below), almost all of the library's resources are stored underground in basement areas that are kept at a constant temperature and humidity. There are four levels to the underground basement area, each of which, according to the architect Wilson, takes up a space approximately equivalent to the size of Wembley football pitch.

The vast storage space available means that almost all of the collection can be stored onsite, whereas previously much of the material had to be ordered from storage areas elsewhere. Naturally, as a reader, one sees the benefit of this, having previously had to wait for up to a couple of days for a book, but now receiving most material within an hour of ordering it.

The Reading Rooms themselves are the only parts of the library (apart from the basements, of course) that are not open to the general public - one needs to apply for a special pass to get in. They are divided into two broad areas, namely the Humanities Reading Room in the central area of the building and the Science Reading Room on the east wing, with each room being on three levels.

The rooms have been designed to reflect the varying needs of different kinds of researcher. The basic assumption underpinning their design is that researchers in the sciences tend to need quick reference materials which are often consulted briefly and are not held on to for very long, whereas humanities researchers tend to stay longer and read more deeply into their material.

Therefore, the Science Reading Room comprises a long central stack of open access material which can be quickly and easily consulted 'on the spot', as it were, with the reader's desk areas flanking this central area to either side and lit mainly by natural light coming in from side windows. The Humanities Reading Room, by contrast, contains a limited amount of reference material on open access shelves to the outer contours of the rooms - most books have to be ordered from the basements below - with the main reading areas in the centre. Once again the reading areas are lit primarily by natural light, which in this case comes from large skylights in the roof of the building.

Access is never going to be the library's biggest problem, unless there is a combined tube, rail, bus and air strike at some time in the future. Euston and King's Cross - two of the biggest British Rail stations in the UK - are approximately equidistant from the library, no more than five minutes' walk in either direction. A number of bus routes pass directly by the library, or near to it.

Alternatively, of course, one could simply take a pleasant wander northwards through central London - perhaps via Bloomsbury, the Library's old home. This is perhaps the nicest way to arrive at the British Library - and, indeed, the least unpleasant way to travel in the often congested areas of the capital's centre. After all, why hurry? There's a whole lifetime's worth of material to drift and meander through once you get there...

1The Old North Reading Room at Bloomsbury refers to the reading room in the British Museum, just one of the disparate parts of the British Library in its previous form.2There is one enduring exception, namely the National Newspaper Library at Colindale in north-west London.