Hidden Corners of Hampstead Heath, London, UK Content from the guide to life, the universe and everything

Hampstead Heath in North London is a vast expanse of land that stretches from London's Zone 1 to Zone 3 and plays host to several stately and historical homes. The park is a staple of Sunday afternoon family picnics and soccer games and is a great spot for generally lazing around on a hazy summer's afternoon.

However, the heath has some hidden corners that never fail to surprise tourists and locals alike and there's something for everyone.

Public transport offers three ways to get to the heath. You can wait for a number 210 bus, which is never very reliable but will drop you off right outside Spaniard's Inn. This route does not have a night service so it's always best to order a cab. Alternatively, you can always take the Northern Line on the London Underground to Hampstead station. Take a right out of the station and head up the hill past Pizza Express and the Victorian church selling second-hand books. As you get to the top of the hill you will see Jack Straw's Castle pub on your left and a fork in the road with a war memorial at its point. Take the right fork (this is Spaniards Road), and walk for 15 minutes and you'll hit Spaniards Inn and access to the heath via Kenwood House.

These areas of the heath have controlled access. They are all free to enter and are usually open from 8.30am. Closing times vary, but the rule of thumb is that the gates shut one hour before sunset. 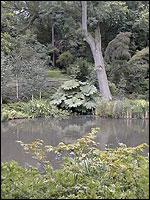 The Water Garden looks as if it has remained untouched since the Jurassic era and is a must for anyone who loves tropical plants. The park was started in 1994 and wasn't really formally designed at all, but was put together by the gardeners of the heath. The pond is natural and is part of the chain of ponds that traverse the heath. As you approach the garden, the first thing you will notice is the gunnera. This South American plant is distinctive because of its huge leaves. It doesn't flower but it just keeps growing and growing.

You may be wondering how this tropical plant survives in the cold winter climes of southern England. Firstly, the leaves of the gunnera grow to such a size that the plant cannot take the strain, the leaves collapse and cover the plant and thus protect it from the frost of winter. To give the plants a fighting chance of survival, the gardeners also wrap the plants in bracken during the winter months to give them that extra layer of protection.

The garden is also home to a variety of species of mint, reeds and tropical grasses. The water garden is in constant danger from the bamboo which was planted to give it that prehistoric feel. The bamboo has started to choke the other grasses and is even attacking the tarmac pavement. The gardeners are in the process of removing it.

If you visit the park at the height of summer, not only will you be bombarded by a wave of smells, but you'll also see a fine selection of dragonflies and butterflies.

As you leave the Water Garden, heading westwards, you will come to a traditional park with bandstand but there is something which is a treat and rarity in an English Park; no not sparkling clean public toilets with doors, but a free zoo.

The zoo is very small but it does provide the chance to see pygmy goats, deer, wallabies, common rheas (pictured), black bucks, a variety of exotic birds and a Patagonian cavy - a sort of large brown wombat.

Many of the fences are doubled up to prevent visitors from feeding the animals; this hinders the taking of photographs but doesn't really mar the experience of getting really close to some of the animals.

The area is a great place to take the family out for a picnic. The Water Garden offers a place for the kids to explore and the zoo is a great place for them to look around while you eat away. The bandstand also has groups and entertainment in the summer months, especially during the school holidays.

If you leave Golder's Hill, heading westwards over the meadows, you'll stumble across a raised red brick building - this is a Georgian Pergola and it is free to enter. You will see a well-used entrance on your left - ignore it. Carry on to the end of the wall and you'll see a path on your left, take this path and you'll see railings, at the end of these there is a gateway, enter here and take the spiral staircase to the pergola. The pergola is full of fragrant flowers including, jasmine, buddleia, sage, honeysuckle, vines, clematis, kiwi, potato vine, lavender and wisteria. The climber plants cling for dear life to the Georgian columns and each pillar has a small black marker with the name of the plant it is being choked by.

The pergola offers two stunning views. You can look straight out and over the heath's canopy and see nothing but trees; smell nothing but Mother Nature; and hear nothing but the tiniest rumble of traffic. Alternatively, you could look down and see the beautifully manicured herb garden and the pergola stretching out before you.

After about five minutes, you'll leave the red brick pergola and enter a traditional Georgian colonnade. There is a gate here which offers an excellent photo opportunity of the pergola in all its magnificence.

Re-enter the pergola and head towards the end section, which opens up in to the Hill Garden. As you descend the pergola stairs you will see one of the heath's oldest and knobbliest trees - a sweet chestnut. If any tree deserves a hug, it's this one. 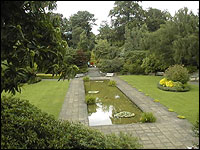 The Hill Garden offers a complete contrast to the wild decadence of the pergola. Beautifully manicured and wonderfully arranged, the garden is a corner of Eden in London. It is a favourite haunt for artists and those looking for a quiet place to read and relax.

There is an ornamental fish pond at the heart of the garden and at the far end there is a little alcove with a bench which gives a stunning view of the heath with London as the backdrop. This alcove is phenomenally popular with artists so it's best to get there early or be willing to share the perch with someone else.