Kingston upon Thames, Greater London, UK Content from the guide to life, the universe and everything 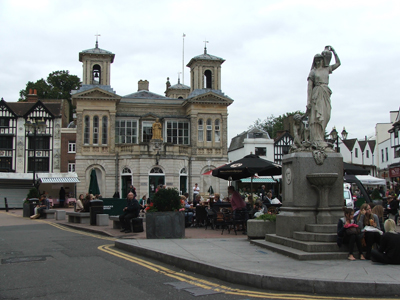 Kingston derives its name from 'King's Town' because it was the town where the Kings of Wessex were crowned. The town is situated upon the banks of the River Thames, just to the south of Richmond Park, the largest park in London. It is speculated that Julius Caesar bridged the Thames at Kingston to continue his progress north in his failed invasion of Britannia. About two and a half miles upstream from Kingston Bridge is Hampton Court, the Royal Palace of such kings as Henry VIII and Charles I. Because the river loops between the bridge and the palace, the distance by road is just over a mile. This area is at the outer limits of Greater London, although the Royal Mail treats it as Surrey.

Kingston upon Thames is one of the few Royal Boroughs in England - partially because of its long and loyal connections with the Royal family. The current status resulted from the Royal Commission on London Government held in 1924. When the Commission threatened to annex Kingston into the London County Council, the then Mayor, Alderman Finney, argued that Kingston could look after its own affairs quite well thank you, without any interference from London and had been doing so since Anglo-Saxon days. He worked to raise public awareness and Kingston retained its self-governing authority. In 1927 he petitioned King George V to change the borough's name from 'Kingston upon Thames' to 'The Royal Borough of Kingston upon Thames'. The King consented and the borough name changed.

One of the strangest royal stories relating to Kingston revolves around Edwy1, a great-grandson of Alfred the Great that is reported in the Chronicle of Britain and Ireland as follows:

The Boy King provokes anger by abandoning his coronation feast for sexual diversion... orgiastic scenes have marred the coronation of King Edmund's 15 year old son Edwy, who has succeeded his childless uncle, Edred, as king of Wessex amid family quarrels...

It goes on to say how he got the crown and then went off to sleep with some young lass and her mother.

Kingston is centrally located near the two great royal deer parks of Bushy Park and Richmond Park. Providing services to the hunting lodges and royal palaces at Hampton Court and Richmond was a catalyst for the town's early growth. The fish for the royal table were caught in the Thames at Kingston and to this day the borough's emblem is three fish under a crown.

Still a market town, Kingston has a permanent market open daily on the town square. Modern marketing has also come to Kingston and it is one of the more rapid-growing shopping areas of London with the Bentall Centre2, a large John Lewis store and various other megastores on the high street and surrounding shopping areas.

Kingston is one of the newest British universities, having until the early 1990s been a polytechnic.

One of the oldest foot-marathons in the world - the Kingston and Polytechnic Athletic Club Marathon - finishes along the banks of the Thames at Kingston. The club still meets at the tartan track at Kingsmeadow.

Kingsmeadow is also the home of Kingstonian who were the British Football Association's trophy winners of 1998 - 9. Kingstonian are trying to emulate local neighbours Wimbledon in reaching the heights of the British football (soccer) league and then beyond.

The most famous MP to have represented Kingston was Norman Lamont who was the Conservative Party's Chancellor of the Exchequer (Minister of Finance) at the time when Britain joined the European Monetary Union (EMU). He was forced to resign as Chancellor following the debacle of 'Black Wednesday'. The fixed exchange rate mechanism, the ERM, got out of British control because the British pound was tied to the German mark. It was simply the wrong policy at the time for Britain and resulted in another million unemployed, the closure of thousands of businesses and the loss of homes by thousands of people who could not keep up their mortgage payments.

For bars try The Ram on High Street or The Grey Horse on Richmond Road. Check the signage outside for live gig info. To round off the night, fancy an Indian? Check out Modern India on Coombe Road. In the words of a fellow Researcher, 'It's been around since the '60s, so it can't be too bad.'

1Also known as Eadwig.2A company started in 1867 when Frank Bentall opened a 24ft by 40ft drapery shop on Clarence Street. It is now a business with a turnover of over £100m per annum.