Swiss Army Knives Content from the guide to life, the universe and everything 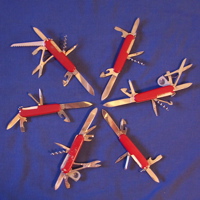 Boy Scouts and girl Scouts all around the world have enjoyed the use of an incredibly versatile tool called the Swiss Army Knife for almost a century.

A Swiss Army Knife can be distinguished by its red casing, printed with a white shield and cross. It contains multiple layers of tools, always including at least one blade. These tools can be rotated in and out of the casing for use. A Swiss Army Knife with all tools extended looks a little like a hedgehog.

Made by two Swiss companies called Victorinox and Wenger, it was originally intended for officers and soldiers of the Swiss army. Swiss Army Knives have become an expression for versatility and portability. Today they are produced in a wide range of varieties, including all sorts of tools from a blade to a digital altimeter.

History of the Swiss Army Knife

The Swiss army decided in 1909 to decorate both companies' knives with the national symbol (a white cross). This has ever since become the distinguishing mark that identified the true Swiss Army Knife, be it 'original' or 'genuine'.

In 1921, Victorinox switched to stainless steel for producing the blades and tools. Sources on Wenger are inconclusive, but it is likely that they made the switch at about the same time.

From 1945 till 1949 the versatile knives were available in American PX stores. They probably sold very well, as from there on the original (or genuine) Swiss Army Knife has diversified into over 800 different forms. Both companies have become huge and are exporting incredible amounts of their products all over the world.

Choosing your own Swiss Army Knife

Swiss army knives are not exclusive to the Swiss army today, and nor have they ever been, really. Everyone and their sister can own one, and probably does. They have many uses, and buying one entails choosing the right one. They come in many shapes and sizes nowadays, so you will have to take a good look at what you want from your pocket knife.

If you want it to fit in your pocket, without making everyone think you are 'very glad to see them', you will have to compromise in the tools included. Also, some of the tools that can be found might be of little use. If you are not planning on going mountaineering, why buy one with an altimeter? If you are a severe technophobe, would you need a screwdriver?

Take IT professionals for example - they're not necessarily mountaineers or survivalists. Because their jobs and possibly hobbies entail unscrewing computer casings, among other things, a knife that has not one but two screwdrivers might be a good choice. It could also have a small magnifying glass for identifying those tell-tale burn marks on dead or dying computer hardware. Of course, it would have to have the ubiquitous blade, can opener and corkscrew. An IT professional's ideal knife would probably have embedded in the side plates a pen for writing down technical things, a pincer for manipulating tiny parts and a toothpick for occupying the time while listening to clients' complaints.