Knives Content from the guide to life, the universe and everything 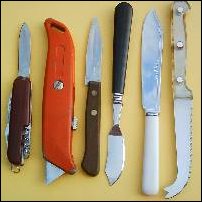 A knife is a hand tool for cutting things into pieces, or occasionally for scoring cuts in something without actually cutting through it. For convenience, in this Entry, the material to be cut will be called the stuff.

Structure and Method of Use

A knife is usually made up of two parts, the blade and the handle.

The handle is designed to allow the user to apply pressure to the blade in comfort, and so is usually reasonably rounded and of a size that can be easily held in the hand. Some knives have their blade and handle made out of the same material, such as flint or metal. Many use different materials, as the differing desired characteristics of blade and handle can often be best met by two different materials.

The blade is a structure designed to allow the application of pressure to as narrow a strip of stuff as possible. If a tool is designed to apply pressure to the smallest point possible, then you have an awl, not a knife. The narrowness of the blade gives a very high effective pressure (force per unit area) with a relatively modest application of force. This pressure causes stresses in the stuff and the bonds between its molecules to break, splitting the stuff. This is called a cut.

The knife is often moved backwards and forwards to use local stickiness (or deliberate roughness, often called serrations) at different points on the blade edge to apply an additional force to the stuff, perpendicular to the main applied cutting pressure. This additional pressure further encourages the breakage of molecular bonds.

The effective use of a knife requires the application of an equal and opposite force on the stuff. This is often provided by a hard surface such as a chopping board. Sometimes the stuff itself provides the required force, as would occur if a knife is used to carve initials on a dead tree. Someone, somewhere realised that the force could also be applied by another blade, and scissors were invented.

A knife is limited in what it can cut by the sharpness of its blade, its hardness and the strength of the person using it. If the stuff is harder than the blade, the blade will deform faster than the stuff will be cut, rapidly thickening the blade and making little or even no permanent impression on the stuff. This is called blunting the knife.

A knife can be sharpened by removing molecules from the edge of its blade in such a way as to create two acutely intersecting planes giving a very narrow edge. This is often done by holding the knife against a fine abrasive surface at the appropriate angles, and moving the knife or the surface (or both) until the required removal is completed. A lubricant (paradoxically) may be used to help this process and give a smooth edge to the blade. Water or mineral oil are commonly used for this. This is called whetting the blade.

Another limit on what a knife can be used to cut is imposed by the strength of the blade, which can break if the applied force is greater than it can stand. This can be dangerous.

Some knives are designed to cut very soft materials. These knives usually have very rounded edges, as there is no need for them to be sharp. Examples include butter and fish knives.

Among the sharpest knives are those used in eye surgery and their blades are made of glass.

Some knives have blades with a variable relationship with their handles. These include pen (or clasp) knives, which have a hinge in them allowing the blade to be folded into a groove in the handle. An elaboration of this is the flick-knife (or switchblade), which contains a spring that is compressed when the knife is closed and that flings the knife open when a button is pressed. Other knives, such as the Stanley knife, have disposable, replaceable blades and these can often be retracted into the handle when the knife is not in use.

There are many forms of knife, each suited to their task and shaped by thousands of years of design based on the experiences of their users and makers. New materials continue to extend the possibilities of knife design. The story of the knife is not over yet. Oh no.