Hedgehogs Content from the guide to life, the universe and everything 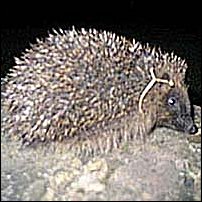 The Common Hedgehog, Erinaceous europaeus, is a small spiny animal which inhabits much of Europe and Asia1. An adult hedgehog is about 25cm in length. The most distinctive feature of the hedgehog is its coat of spines. When threatened, the hedgehog can roll up into a ball, with spines sticking out in all directions. Hedgehog spines protect the animal from attackers; the spines are extremely sharp and are one of the strongest structural materials known, weight for weight. The spines are also flexible, so they act as shock absorbers if the hedgehog falls.

Hedgehogs tend to be fearless little creatures. Nearby people do not worry them, as they know they can protect themselves at any time. They rarely run away. Sadly, this behaviour also means that they are often killed by cars while crossing roads; their spines can't protect them from this hazard.

The hedgehog has a long pointed nose with a snuffly snout at the end. This accounts for the 'hog' part of their name. They live in undergrowth and hedgerows, which explains the 'hedge' part of their name. In olden times, they were called 'urchins'. This explains the meaning of 'sea-urchin', as these marine creatures have an appearance resembling the hedgehog. The phrase 'street urchin' also comes from hedgehogs, as both have a rather pugnacious look when they fix their beady eyes on you.

Hedgehogs are nocturnal animals, living in undergrowth and hedgerows. They eat slugs, snails, insects and even mice. The legs of the hedgehog are quite long; they can run very fast when necessary, such as to catch a mouse. Normally, however, they keep the legs tucked underneath them and give the impression of slow, tank-like creatures. Hedgehogs are not quiet - they don't need to worry about anything attacking them and the creatures they hunt will not be frightened off, so they merrily tramp through the undergrowth, oblivious to the noise. The easiest way to find a hedgehog is to listen.

Hedgehogs are born in the spring, usually with four in a litter. Their spines are soft at first, but they quickly harden. In the autumn, the mother will bring her family to a place with lots of food and abandon them. The hedgehog spends the rest of its life as a solitary animal, meeting other hedgehogs only occasionally to mate. The young hedgehog spends all the autumn eating as much food as possible to prepare for the long winter. During the coldest part of the winter, the hedgehog hibernates, usually in a pile of leaves, so it needs as much body weight as possible to survive. If it gets past the first winter, it will probably have no problem with subsequent winters and will live to the grand old age of a few years.

A Hedgehog in Your Garden

If you are lucky enough to discover a hedgehog in your garden, do your utmost to persuade it to stay. As well as the joy of having a tiny wild creature under your care, the hedgehog works for you, clearing your garden of slugs and snails better than any beer trap or chemical slug-killer. Hedgehogs have been known to eat their body weight in insects in one night. Offer your hedgehog plates of cat food. Any type except fish-based ones should do. Don't give your hedgehog bread or milk, as it will eat it and upset its stomach. If you feed your hedgehog for a few nights, it may realise it is onto a good thing and decide to stay with you. If this happens, the hedgehog will get to know you and will come looking for food. When winter arrives, it will make a pile of dead leaves and go to sleep. At the start, it may wake up occasionally and appear once or twice a week. Then it will settle into the death-like sleep of true hibernation and you won't see it again until spring.

Many young hedgehogs die over the winter. If you have fed yours up enough, it will probably survive. If you find your hedgehog in the spring and it appears to have died, don't despair. It is difficult, if not impossible, to tell whether it is really dead or just hibernating. Leave it, and it may wake up a week or two later.

When your hedgehog wakes up, make sure you are ready to feed it, or it might wander off. Nevertheless, it will probably leave you sooner or later, leaving behind a garden cleared of slugs and snails. You probably won't see a slug or snail for about a year after you say good-bye to your hedgehog.

Count yourself privileged that you have been visited by this tiny, independent creature.

1The hedgehogs sold as pets in North America have been imported specifically for that purpose, and are generally pygmy hedgehogs from Central Africa. These hedgehogs are smaller than those discussed here and have a few other differences as well. For more information on domesticated hedgehogs, try the International Hedgehog Club.