The Football World Cup - An Introduction Content from the guide to life, the universe and everything 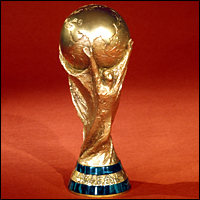 The football World Cup has its origins in the modern Olympic Games. When Baron Pierre De Coubertin resurrected the Olympics in 1896, he envisaged that they would become the world championships of many sports.

From 1900 to 1928, an Olympic football tournament was held with the following teams winning gold:

FIFA1 was formed in France on 21 May, 1904. Although FIFA tried to organise an international tournament of its own, the 1908 Olympic tournament was organised by Daniel Burley Woolfall on their behalf. It was not until Jules Rimet became FIFA's third president on 1 March, 1921, that FIFA began seriously to consider trying again. They were spurred on by the success of the 1920 Olympic tournament in Belgium.

The turning point occurred in 1927, when the 1932 Olympic Games were awarded to Los Angeles. Due to the sport's unpopularity in America, no plans were included for a football tournament. Further disagreement between FIFA and the International Olympic Committee (IOC) over the definition of amateurs, led to an inaugural World Cup being held in 1930, while there was no Olympic soccer tournament held in 1932.

The first World Cup tournament was held in Uruguay in 1930. Thirteen nations competed, and only four European countries made the long sea voyage. The final was eventually won by hosts Uruguay, who beat neighbours Argentina 4-2, continuing the dominance they had shown in the 1920s Olympic tournaments.

In 1934, the tournament moved back to Europe, and Italy both hosted and won it, beating Czechoslovakia 2-1 in the final. Just as the Nazis did at the 1936 Berlin Olympics, the Fascist ruling party used sport as a way to promote their ideologies, and the Italian football team became the best in the world. Four years later, in 1938 the Italians retained their trophy in Paris, beating Hungary 4-2.

For the next 12 years the Italians held on to the trophy2, as World War II stopped tournaments being held in 1942 or 1946. In 1950 the tournament returned to South America, where hosts Brazil were upset 2-1 by Uruguay in front of almost 200,000 supporters.

In 1954 the tournament moved on to Switzerland. The aftermath of World War II had now passed. The Eastern Europeans entered the tournament, and West Germany were admitted. The favourites to win were the 'Mighty Magyars' of Hungary, who in 1953 had become the first team to defeat England at Wembley. Surprisingly, though, they were beaten 3-2 in the final by West Germany, a team that they had beaten in the group stages. It was to be Hungary's only loss in competitive matches between 1950 and 1956.

Nineteen fifty-eight saw the introduction of perhaps the world's greatest ever player, and the country that was to dominate world football for the next 12 years. Brazil's 17-year-old striker Pelé scored six goals, including a hat-trick in the semi-final against France, and two more in the final where Brazil beat hosts Sweden 5-2 to win their first World Cup final. Just Fontaine of France scored a record 13 goals in only six matches.

In 1962, the finals returned to South America. In Chile, despite losing Pelé in the early rounds because of injury, Brazil retained their trophy by beating Czechoslovakia 3-1.

Continuing the alternation between Europe and South America, football came home to England in 1966, where Alf Ramsey's 'Wingless Wonders' gelled to become the World Champions. In an exciting Wembley final, West Germany equalised in the last minute of normal time to send it into extra-time. Geoff Hurst then became the only man to score a hat-trick in the final, which included England's hotly disputed third goal which the Russian linesman judged to have crossed the line.

In 1970, football blasted into the modern era. Satellite technology beamed live colour pictures around the world from Mexico, while on the pitch red and yellow cards and substitutions were used for the first time. In total, the final eight games of the tournament produced 34 goals. Brazil returned to their winning ways with perhaps the greatest team in World Cup history, beating Italy 4-1 in the final. Because they'd now won the World Cup for a third time, they were allowed to keep the Jules Rimet Trophy.

Nineteen seventy-four saw the future become orange, as the Dutch and their brand of 'Total Football' enthralled millions. Inspired by Johan Cruyff, the Netherlands reached the final and took the lead through the first ever penalty in a World Cup final. However, their opponents, hosts West Germany, replied with a penalty of their own and then scored a second to win 2-1. Inspirational leader and captain Franz Beckenbauer became the first man to lift the new FIFA World Cup trophy.

The Dutch returned to the final four years later to meet the hosts Argentina. Just as 50 years earlier, Mussolini had wanted to show the world his political power, so did the ruling military junta. Although a very good team, there were suspicions as to how Argentina reached the 1978 final. Needing to beat Peru 4-0 in their last second phase group match, they won 6-0. So, at the expense of Brazil, they went on to beat Holland 3-1 in extra time, and consign the Dutch to runners-up status for a second successive final.

Spain hosted the 1982 tournament, which expanded from 16 to 24 teams. At its best the tournament produced an epic five-goal battle between Italy and Brazil, with Paolo Rossi scoring a hat-trick, and the first game ever to be decided on penalties. West Germany came back from 3-1 down in extra time to draw 3-3 and then win 5-4 on penalties against France. At its worst, it's remembered for goalkeeper Harald Schumacher breaking the jaw of France's Patrick Battiston in the same match, and the Germans and Austria playing out a lacklustre 1-0 win for Germany to ensure that both teams qualified from the group stages at the expense of Algeria. In the end, Italy lifted the trophy for a third time by beating West Germany 3-1.

The World Cup returned to Mexico in 1986, following Colombia's late withdrawal as hosts. The tournament was dominated by the play of one man, Diego Maradona of Argentina. He is remembered for his two goals that knocked England out at the quarter-final stage. The first, which became known as 'The Hand of God' he punched into the England net. The second was a superb surging run from inside his own half past seven English players, and is perhaps the greatest World Cup goal ever. Two more goals in the semi-final saw Argentina past Belgium into the final, where they met West Germany. In a tense and thrilling encounter, the Germans came from two goals down to equalise with less than 10 minutes left, before Burruchaga scored the winning goal with six minutes to go. Maradona had inspired his team to the top of the world.

Four years later the finals returned to Italy. The 1990 tournament's surprise team were Cameroon, who beat defending champions Argentina 1-0 in the opening match. They became the first African team to reach the quarter-finals, where they were despatched by two Gary Lineker penalties, the second coming in extra-time as England came from behind to win 3-2. The semi-finals both went to penalties, and then it was a repeat of the 1986 final as West Germany (now in their third successive final) finally became world champions under the management of former captain Franz Beckenbauer. A bad-tempered final saw West Germany conquer the Argentinians 1-0. Argentina ended the game with nine men on the field, as Pedro Monzon and Gustavo Dezotti became the first players ever to be sent off in a final.

The commercialisation of football at the turn of the 1990s saw FIFA wanting to conquer its last remaining frontier - the United States of America. The 1994 tournament was therefore held in the USA, to the chagrin of many commentators. Although all the matches were sold out, and American organisation was superb, the tournament itself failed to generate any long-lasting memories. Even the final became a disappointment as Brazil and Italy played out a 0-0 draw, which led to the first-ever penalty shoot-out in a final. In the end, it was Brazil that finally ended over 20 years of waiting for their fans as they won 3-2 on penalties.

The 1998 finals returned to the more traditional staging grounds of Europe, where hosts France played superb football to lift the World Cup for the first time. A solid defence was supplemented by the creative genius of Zinedine Zidane in midfield. Zidane scored the first two goals before half-time as France beat an off-form Brazil 3-0. The tournament expanded to include 32 teams and saw the Golden Goal rule introduced. The rule meant that games in the knock-out stages that were level after 90 minutes were settled by the first goal scored in extra time. The rule only decided one match: France's 1-0 victory over Paraguay in the second round.

FIFA's push to conquer new territories saw the 2002 World Cup finals being hosted in Asia, by Japan and South Korea. This trend was expected to continue four years later, with South Africa expected to be chosen as the venue for the finals. In the event, however, a close and hotly-disputed vote saw Germany being chosen as the hosts for 2006. South Africa would have to wait until 2010 to become the first African nation to host the event.

1Football's world governing body. The Federation Internationale de Football Association.2The trophy was reportedly kept under the bed of a member of the Italian FA.