The Greek Alphabet Content from the guide to life, the universe and everything 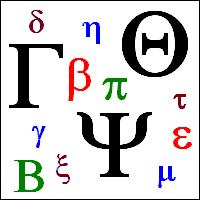 The Greek alphabet is used throughout Greece and in the Greek part of Cyprus. If you are going to these regions, it is worth learning the alphabet, if only to read the signs over shops.

The letters of the Greek alphabet are also used as handy symbols by mathematicians and scientists. These people pronounce the names of the letters quite differently from Greek people, being loosely based on the pronunciation of classical Greek.

The Greek alphabet was developed in about 1000 BC. It was a modification of Northern Semitic, an alphabet from which Hebrew is also derived. The Semitic languages (which include Hebrew and Arabic) have a lot of consonantal sounds, while vowels are relatively unimportant. As a result, their alphabet had no symbols for vowels. The Greeks changed the alphabet; consonantal signs which represented sounds not present in Greek were re-used for vowel sounds. Greek thus became the first alphabet in the world with signs for both vowels and consonants.

At the start, the direction of writing was from right to left, but the early Greeks adopted an unusual practice of writing every second row in the opposite direction. This was called boustrophedon, literally meaning 'as the ox turns' because it resembled the way an ox ploughs a field. There is a very good example of this in the Greek city of Gortys in Crete, where the laws of the city were carved on a wall in boustrophedon style and are still there for all to see. Around 500 BC, the practice changed to writing from left to right, and this continues to the present day.

There are 24 letters in the alphabet. They can be capitals or lower case. In addition, one of the lower case letters, the sigma, has two different forms.

Some letters are pronounced differently when they appear in combination with other letters.

An exception to these is that if the first vowel of any of these two-vowel combinations has an accent mark on it, or if the second vowel has two dots over it, the two vowels are treated separately, and not combined as in the table. Thus for example κομπολóι (worry beads) is pronounced 'kombol-oh-ee'.

Greek is a strongly stressed language, even more so than English. The stress is very important, so it is normally marked with an accent over the vowel. Ancient Greek used three different accents, while Modern Greek uses only one.

In Ancient Greek, words starting with a vowel or an r had a special sign called a breathing mark. This looked like an apostrophe and was positioned over the first letter, although printers often put it in front of the first letter. A right-facing mark (like a backwards 9) was called a 'rough breathing mark' and indicated that there was a 'h' sound before the vowel. A left-facing mark (like a 9) was called a 'smooth breathing mark' and indicated that there was no 'h' sound.

In Modern Greek, the 'h' sound is no longer pronounced at the start of any word, but the breathing marks were still used for historical reasons until about 1970, when they were officially dropped from the language.

In Ancient Greek, in some cases when iota appeared after another vowel (a diphthong), it was written using a special little iota under the vowel instead. This was called an iota subscript. These do not occur in Modern Greek.