The Dreamtime Content from the guide to life, the universe and everything 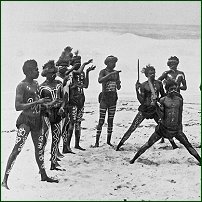 In 1788, when European settlers arrived on Australia's east coast, they encountered people who seemed to have little attachment to the land they inhabited. Australia was declared terra nullius1, and the 'unowned' land was claimed legally, in British eyes, by right of first discovery2.

Historians, anthropologists and archaeologists have developed a theory as to how the Aboriginal peoples first came to inhabit Australia, though the debate still rages over certain aspects. In 1981, it was generally accepted that the Aborigines had been in Australia for at least 50,000 years, but developments since then have suggested that the first colonists of Australia arrived anywhere between 80,000 and an amazing 120,000 years ago, from south-east Asia. Over thousands of years, small groups made the journey to Australia, which at the time was still attached to New Guinea by a land bridge. Some groups settled in the lush north, while others travelled southwards along the coasts. When the entire exterior of the continent was occupied, some tribal groups moved inland. Australia was isolated from the rest of Asia at the end of the last Ice Age, 10,000 years ago, when all the peoples of the world were hunter-gatherers. The Aboriginal people continued their lifestyle for the next 10,000 years, adapting to the environment and developing a unique culture, which was passed down through the generations through stories and songs. While there were hundreds of tribes and a similar number of different languages, all tribes held the idea of Dreamtime in common, though there are inevitably some differences across the continent.

In the distant past, before living memory, the world was flat, featureless and lifeless. Then the ancestral beings arrived, some from the sky, some from across the water, and some from the ground itself. These totemic beings were part-human and part-animal. They took the form of giant animals with superhuman powers, but thought and acted like humans. These ancestral beings travelled throughout Australia, leaving signs and trails behind them and performing magic to shape the featureless landscape into what it is today. Winding creek beds were formed by the Snake Ancestor weaving his way through the countryside. Unusual rock features may have been formed by an angry ancestor wielding an axe. Some of the totemic spirits metamorphosed into features themselves, forming islands, rocks or mountains. Others formed waterholes when they descended back into the ground from whence they came, and those who ascended into the sky formed the stars. This period of time is known as Dreamtime. When the ancestral beings departed from the earth they left behind them a 'life essence' from which humans and animals were formed. The essence controlled all fertility, of humans, animals and plants, and the Aborigines performed ceremonies at sacred places to ensure the regeneration of all life, and thereby maintained spiritual, physical and social unity within and between the tribes.

Even without use of the written word, Aboriginal practices (laws, customs and rituals) have been passed down for literally thousands of years through song and dance, in what is known as 'the Dreaming', rather than Dreamtime, which is the specific creation period before time itself.

The law controlled the Aboriginal peoples' relationship to the land, ensuring that the food supply would not be greatly threatened, and emphasised a mutual dependence on the environment. In return for taking food from the environment, the tribes performed 'increase rituals', believing that without the rituals all life would end as reproduction ceased.

The Aboriginal people believed that when a woman became impregnated, it was the spirit of one of the totemic ancestors that entered her body, sometimes through the big toe, under the nail. The woman and her husband would then be responsible for identifying the particular spirit. They could have passed a sacred spot around the time of conception, or dream of a particular animal to identify the spirit. A person's totem is their 'other self'. Someone whose totem is the kangaroo would say 'I am Kangaroo'. They would be prohibited from hunting or eating their totem, and it is believed that they would be protected by their totemic animal3. They, and the others who shared the spirit ancestor, would be in charge of the particular ceremonies related to that being.

Death was only considered natural when the victim was either very young or very old. If an apparently healthy adult died of disease, the Aboriginal people believed that it was actually sorcery, and revenge was taken against those whom it was thought had caused the death. After death, the spirit of the ancestor was hastened to leave the body of the deceased and return to their sacred site. To encourage the spirit's departure, the dead body was treated with smoke to make it unappealing to the spirit, and the deceased's limbs were broken so the spirit could not reanimate the body. Footprints were wiped away so the spirit could not find its way back, and the name of the dead person, as well as words that just sounded similar, were not spoken again.

When the Europeans first arrived on Australian soil, they believed that the lack of agriculture and domesticated animals indicated that the Aboriginal people they encountered were little more than animals. In reality, the Aboriginal tribes were uniquely adapted to life on the often arid continent, and their lack of material possessions did not signify a lack of culture. The idea of Dreamtime has persisted through millennia, and the various rituals are still practised by today's Aboriginal communities. Aboriginal stories and art depicting the Dreamtime have travelled through the world, and indeed even been used in court as title deeds. Almost all Aboriginal art depicts the Dreamtime in some way, and many pieces are now commanding millions of dollars in overseas markets.

1No man's land.2Though some debate raged even at the time, with some maintaining that the right of ownership depended on occupation and improvement of the land, not just discovery, while another unpopular opinion was that the British won the continent by conquest.3Or, perhaps less usefully, their totem plant.