Stevie Wonder Content from the guide to life, the universe and everything 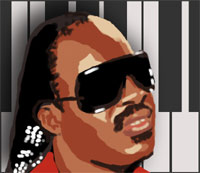 Most people remember Stevie Wonder as the man singing down a phone receiver in the 1980s, his music dripping with soft sentiment. But the 1970s had seen a whole different version of the man. He'd spent the decade redefining R&B, giving it a harder edge and a louder social and political voice – surely his best, and certainly his most prolific years.

Born Steveland Hardaway Judkins in Saginaw, Michigan on 13 May, 1950, he became Little Stevie Wonder in 1962, a Motown novelty act, seen by many as the young Ray Charles. He was pure gold – completely blind and supremely talented. But as with any artist on the Motown label during the 1960s, he had little control of his output. Songs were mainly written and arranged by the in-house production line, and then allocated to the artists – many being sung by more than one act, before any decisions were made about its release. Stevie (who dropped the 'Little' in 1964) scored massive hits with songs such as 'Uptight', 'My Cherie Amour', and his co-written smash, 'For Once in my Life'.

In 1971, Stevie turned 21, and his contract with Berry Gordy and Motown expired. For his seminal album What's Going On, Marvin Gaye had famously negotiated total creative control of his music, and Stevie insisted on the same deal for himself. It was an inspired move, which resulted in not only the progression of R&B, but it also took soul music into an album age. Before then, Motown had churned out collections of hits, with no obvious thread running through them. Between them, the likes of Stevie Wonder, Marvin Gaye and Isaac Hayes created the soul equivalent of the concept album, weaving themes and continuity with their sounds. It's interesting to note that on many of their 1970s releases, the songs tended to blend together with no obvious gap between them.

The key Stevie Wonder albums of this time were Talking Book (1972), Innervisions (1973), and Songs in the Key of Life (1976). With each one he took on the majority of the writing and production duties, and was a major player in bringing synthesisers into modern pop music. His sound became completely unlike any other artist of the time, with songs like 'Living for The City', 'Pastime Paradise', and 'Superstition' staying true to his soul roots, innovating a new sound, and making a strong political point at the same time. Gone were the matching Motown outfits, and the traditional R&B set-up. In came a visual style that had more in common with the street fashions of the time, and a sonic style that somehow managed to incorporate traditional soul sounds, with jazz, reggae, rock, and African beats all in one set.

After Songs in the Key of Life - widely regarded as Stevie's finest moment - he retreated to the studio for his next project, A Journey through the Secret Life of Plants. Not an R&B project, nor a pop album, it was to be the soundtrack to a nature documentary, though the documentary itself was never screened. The creative juices were still flowing, yet, being mostly instrumental, it signalled the end of the run of strong vocal soul offerings. He had created something more whimsical and saccharine – a sound that would follow him into the 1980s.

His 1980 album, Hotter than July, was a deliberately more lightweight, pop-angled affair. By now, he was a global star, and his electronic sound that had been so revolutionary during the previous decade had become a pop standard. But while his music had softened, his stance was still political.

He continued to push for equality, duetting with Paul McCartney for racial harmony on 'Ebony and Ivory' in 1982, and the success of 'Happy Birthday' from Hotter Than July played a crucial part in making Martin Luther King's birthday a national holiday in the US. But his albums started to lack bite as he moved into soundtracks, and a more accessible pop-orientated sound. The Woman in Red (a relatively unimpressive film starring Gene Wilder) soundtrack spawned his biggest ever hit - 'I Just Called to Say I Love You'. It disappointed the critics at the time, but won a mass global audience. Stevie Wonder became synonymous with syrupy romance, a far cry from the innovative and youthful urban star he'd become in the 1970s.

Even so, while his sound became less abrasive and experimental, the influences of his 1970s back-catalogue could still be heard reverberating through the work of artists like Prince, Michael Jackson, and the growing number of US Hip hop groups. And in 1991 he teamed up with another proud spokesperson for black America, Spike Lee - a film maker every bit as groundbreaking and controversial as Stevie had been 20 years earlier. The two worked on Jungle Fever, with Wonder supplying the soundtrack. Again, the music lacked his former potency, favouring a catchy sing-along sound, and very simplistic lyric.

For the remainder of the '90s he faded under the weight of an ever-changing pop scene - his 1995 album Conversation Peace was a commercial disappointment. Yet, by then, his status was legendary, with the new stars of R&B name-checking him by the bucket-load.

His influence on artists and pop music since the 1970s simply cannot be overstated – modern urban music is completely indebted to that time. He created the template for new soul sounds, brought electronics to the forefront of music production, and defined an era both musically and culturally. And we haven't even touched on his numerous guest spots, USA for Africa, the records he produced for others, the iconic braids, the Eddie Murphy impersonation...