The 1960s - an Introduction Content from the guide to life, the universe and everything 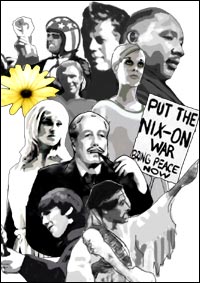 The 1960s - for some, it marked the end for 'Victorian values' and the beginning of the permissive society. It was a time of freedom, a decade of social unrest, innocence lost, scandal, war, sex, drugs and rock and roll...

For many people, nostalgia begins with the 1960s. But as we might expect, nostalgia has a nasty way of masking the darker side of history. And believe us - the 1960s had its fair share of darkness...

The British public might not have believed Macmillan's assertion that they'd 'never had it so good' at the time, but looking back we can see that there was something to what he said. Possibly for the first time in history, working-class people had spending power, rationing was well and truly a thing of the past, and people were generally better off, as these Researchers recall:

...The '60s was the time to be alive; if you weren't there then it's hard to explain. You had to live it: great music, hire purchase and a time for the young to express themselves. [You could be] out of a one job on Friday, and start a new one on Monday. It was the time to break free from old traditions and start to create new ones. The cost of living was cheap, inflation had not been invented and words like 'cost-effectiveness' and feasibility were never heard. [In the UK], petrol cost two shillings and six pence per gallon, and concerns over congestion weren't even on the horizon...

...I was a student in London from 1965 to 1968 and received a Local Education Authority grant. I drew out about £7-10s-0d (£7.50p) a week from my bank account. I didn't have a current account just a deposit account. My digs (student accommodation with a family) were shared with another student. The digs cost 5 guineas a week (£5-5-0) or £5.25p for which we got bed and breakfast, evening meal and lunch on Saturdays and Sundays. Like most landladies, they only took us in to help pay their mortgage. Rents were always in guineas (£1-1-0d) - £1.05 in modern terms. Meals in the student canteen were 1/6d (7.5p) for beans and chips, egg and chips etc. A 3-course lunch at the Chinese in Mile End Road was 5 Shillings or 25p. Beer was 1/8d a pint for bitter (about 8 or 9p). I think petrol was about 5/- (25p) a gallon although I didn't have a car but contributed to others who did and gave lifts. Loose sweets were typically 6d (2.5p) a quarter pound (can't convert to kilos easily - I still think imperial for weights). Most people starting work after college that I knew were earning £900 to £1,000 per year in their first job in 1968; I got a postgrad grant of £512 per year (at least grants existed then for students)...

More and more communications satellites began circling the planet and in 1966, the British Post Office erected the Post Office Tower (later the Telecom Tower and at the time of writing the BT Tower) in central London. Mobile phones didn't exist of course - at the start of the decade even the police had to rely on Police Call Boxes in lieu of the yet-to-be-developed radios. And if you had to use a public call box, you could find yourself merely going from A to B...

...Telephone Calls from a call box were, I think, four one-penny coins for a three-minute local call. You put in the money, dialled the number and pressed Button A when you got your connection, or pressed Button B if it was the wrong number. You always pressed Button B on entering a call box just in case the last person had forgotten to retrieve their money. There were always rumours among students of a magical number that Post Office employees had that enabled you to make free calls. For trunk calls or overseas you loaded in lots of coins I think mainly 1 shilling (5p) pieces which the operator listened to you loading before connecting. If there were problems with an operator call they sent you a refund in postage stamps...

While many houses were benefiting from modernisation, it should be remembered that not only did many people still have coal fires, but also outside toilets were still common. Heaven help anyone getting 'caught short' during the winter months:

Leeds in the early 1960s was extraordinarily dirty. Before the Clean Air Acts, the sulphur content of the air was enough to dye the white stripe in the university scarf yellow within one month of purchase. It was also extraordinarily cold. Can't remember if it was 1961-2 or '62-3 when it froze every night from 1 October to 31 March, but not only did the inside of the windows freeze, but my breath froze on the wallpaper at the side of the bed...

Considering how important music was to the youth market of the 1960s (more of which later), it really did seem the time to live, especially when you consider these prices:

For almost the first time that century there was not the threat of, or recovery from, war for people to worry about. Another thing that was a change was that they had money to spend on things that they wanted, rather that just on what they needed. This increase in personal wealth gave people more money in their pockets, which obviously needed something to be spent on. Soon the market became flooded with products to suit peoples needs, and this provided people with jobs which meant that they were earning money that they could spend on other things, and so the economy was in an upward spiral for much of the 1960s.

A high-point of the 1960s was the prosecution trial of Penguin Books on the grounds of obscenity because of its publication of a long-banned DH Lawrence novel. Lady Chatterley's Lover was the story of an upper-class woman and her affair with her gamekeeper, a story that some considered transgressed a number of social and sexual taboos. It was an absurd trial, and the jury found Penguin not guilty, and the whole ordeal made censorship seem out of place in a free society.

The prudish society also disapproved of OZ magazine, which was described by the News of the World as 'Obscene and dirty.' OZ came to London in 1966 with publishers Richard Neville, Felix Dennis and Jim Anderson pushing the limits of permissiveness with every edition. Prosecution for obscenity followed the 1970 'school kids' issue' which included, among other outrages, and obscene cartoons of Rupert the Bear.

Fashion in the 1960s could almost have been described as explosive. So many new hip styles were being introduced all over England, particularly in London. This was now the trendy, swinging place to be, the 'Scene' as it was called by Time magazine. There was new confidence and boldness breaking out everywhere, and so many different fashions were going through circulation that the period was described by Harper's Bazaar as 'enjoy-it-today-sling-it-tomorrow' fashion. New materials were used, reflecting the excitement and technology of the space age, like Melinex, Lurex and PVC, but perhaps the biggest change in fashion is that it ceased to be an exclusively female concern. Men became interested in fashion and 'became peacocks', many of them relishing the change to the colourful, flowery looks that became so popular.

Very few fashions are actually new, many are just old ones coming back into style; women's fashion at this time echoed the sensual 1920s, a slinky boyish look with heavily made up eyes, pale lips and sleek hair in the new geometric styles championed by Vidal Sassoon.

In the course of the decade the number of immigrants from the Commonwealth more than doubled. Most of these were West Indians; the others were mostly Asians with roots in the Indian subcontinent or in East Africa.

There were of course many people who disagreed with immigration. Enoch Powell, a Conservative MP, spoke out against immigration on 20 April, 1968. in a speech that has since been called the 'Rivers of Blood' speech, he warned against excessive immigration from 'the Colonies':

As I look ahead, I am filled with foreboding; like the Roman, I seem to see 'the River Tiber foaming with much blood. That tragic and intractable phenomenon which we watch with horror on the other side of the Atlantic but which there is interwoven with the history and existence of the States itself, is coming upon us here by our own volition and our own neglect. Indeed, it has all but come. In numerical terms, it will be of American proportions long before the end of the century.

As a consequence, Powell was branded as a racist and was dismissed from office soon after the incident. Whether or not Powell's comments were intended as pro-British or anti-immigrant, this speech has been used by parties on both sides of the argument to mark the point where immigration went from being a new phenomenon to a 'problem'. From this point on Britain was a multicultural society, whether it wanted to be or not.

It's been said before that 'if you can remember the '60s you weren't there', but a few memories have survived for me. I was only 12 in 1963 when the Beatles were a great new pop band that everyone was talking about. By 1969 when I was 17 I was thoroughly immersed in the '60s culture, bell-bottom jeans, tie die tops and all - including lots of 'natural' highs like the extremely dangerous peyote, psilosybe, and mescalin... [I went to] a real, live toga party long before Animal House. Only one orgy, unfortunately but tons of gratuitous sex in the age before it could kill you. Then there was pyramid power and light-up digital watches...

I guess the Sixties ended when I got a job, got married and had kids. Now I'm just an old fool with some befuddled memories and a strong but reasonable sense of morality and ethics. I vote left, invest right, and managed not be become a Yuppie. Oh, and by the way, my children have two arms, two legs, one head each and are healthy, happy, and much smarter than me. When it came to drugs, I was able to tell them enough true horror stories that they are now quite conservative. Go figure.

h2g2 boasts a number of entries relevant to the 1960s. Here's a small selection of them: