Motown - the Record Label Content from the guide to life, the universe and everything 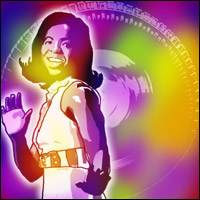 Motown was a little hit factory, and I got the idea from the assembly line that I worked in at an automobile plant.
- Berry Gordy Jnr

Situated in Detroit, Michigan, Motown1 Records was one of the most influential record labels of all time. It was the brainchild of an enthusiastic black man who wanted to make his mark in a white-dominated music industry. Determined to turn his ambitious dream into a reality, Berry Gordy Jnr (born 1929), funded with an $800 loan from his family, created the first major black-owned record company in the world in January 1959.

Gordy scouted for talent and also wrote songs for Jackie Wilson (1934 - 84), although he was never signed to the Motown label. Record producers and other songwriters were signed up and Gordy continued to search Detroit for artists to join the rapidly expanding 'family'. By 1964 Motown Records, originally called 'Tamla Records', was the largest and most successful independent record company in the United States. By the mid-1970s it was the largest independent record company in the world.

Gordy's two sisters Esther and Loucye looked after administration and sales, brother Robert was studio engineer, and father Berry 'Pops' turned up most days to lend a hand.

Gordy did not have a business outlet in the UK to distribute his records so he used other record companies like Stateside. Eventually the Tamla Motown Record Label was created for the lucrative UK market in 1965.

Motown's unique sound stemmed mostly from trial and error. Recording equipment was very basic and in order to create a distinctive sound, some unorthodox methods were used. A toilet annexed to the studio at 2648 West Grand Boulevard doubled as an echo chamber. Chains were rattled, tin cans were banged against each other or kicked around the studio (which was nicknamed 'the Snakepit' because it was so small) and clerical staff provided hand-claps or additional back-up vocals. The 'Motown sound' became popular the world over as the resulting albums combined soul and R&B with Gospel undertones to celebrate their roots.

Some Motown artists were recruited from talent shows, others caught Gordy's attention while busking on street corners. Youngsters with dreams of singing careers turned up at the Motown offices requesting auditions, having heard about the company through word-of-mouth. Some of the backing singers and musicians were locals grateful to be earning a living wage.

The secret of Motown wasn't just raw singing and dancing ability, but a disciplined pursuit of showbiz excellence. The young and enthusiastic artists practised choreography, taught by experienced tutors like Maxine 'Miss' Powell, who owned a modelling and finishing school, and, 'the Man with the Moves', Charles 'Cholly' Atkins (1913 - 2003), to give original stage performances. They were trained to hold a microphone properly, how to ad-lib between songs, how to walk on stage correctly, and, for the groups, how to dance in synch. This free tuition was greatly attended and acts were polished and honed to perfection.

'The Sound of Young America' was plastered over Motown's record sleeves and the studio building had a sign outside saying 'Hitsville USA'. That prompted Memphis-based record company Stax to brand itself 'Soulsville USA'.

Motown's first successful group was a teenage girl quartet called The Marvelettes. They had written and performed their own song, Please Mr Postman (backed by the Funk Brothers), and it hit the top spot in the American chart in the autumn of 1961.

Motown churned out collective albums of hits, Motown Chartbusters, numbered 1 - 9 with no obvious thread running through them, containing possibly two recordings from different artists on each LP.

Talented performers such as the singer/songwriters Marvin Gaye and Stevie Wonder were frustrated by this state of affairs and wanted to release their own material on their own albums, but were bound by contract to do as they were told, not what they wanted.

For pioneering Gaye's first solo album What's Going On, he had to negotiate with the Motown producers for total creative control of his music, and it was ground-breaking because he had written and produced it himself. Stevie Wonder followed suit and a new musical concept was born; the Motown baby was growing up and rebelling. Other artists followed Gaye's lead as they noted his success and it gave them the confidence to negotiate their own contracts when they came up for renewal.

Gordy experimented with teaming up individual artists to create new sounds. Marvin Gaye (who was married to Gordy's sister Anna from 1961 to 1975) released singles with Tammi Terrell, Mary Wells and Kim Weston, but when he got together2 with Diana Ross the resulting album Diana & Marvin was a best-seller. Other joint projects were planned but they were thwarted by Gaye's murder. Diana Ross also duetted with Lionel Richie, who was then the lead singer with The Commodores; and Michael Jackson.

Stevie Wonder teamed up with Syreeta (they were also married from 1970 to 1972), and she later duetted with Billy Preston. Diana Ross and The Supremes and The Temptations enjoyed joint success at the end of the sixties with I'm Gonna Make You Love Me and following this, Gordy even got The Supremes and The Four Tops to sing together as 'The Magnificent Seven' on the 1971 smash-hit River Deep, Mountain High.

If we didn't get the goose bumps or the hair standing on the neck, then something was missing.
- Lamont Dozier.

Tamla Motown's top songwriting team Holland/Dozier/Holland wrote over 40 hits (25 top ten hits, 14 of those being number ones) from 1961 onwards for artists such as The Temptations, The Four Tops, The Supremes, Jr Walker and the All Stars and Martha Reeves.

The songwriters, brothers Brian and Edward Holland and Lamont Dozier, departed Motown together in 1967 to found their own companies Invictus Records and Hot Wax Records, launching the careers of Chairmen Of The Board and Freda Payne. They operated as independent producers in the mid-seventies and wrote hits for the Jackson Five, The Supremes and The Originals.

The Detroit riots were a massive wake-up call for the Motown company, which now seemed embarrassingly out of the loop. As the mood of the American nation changed with the rise of the civil rights movement and protests over the Vietnam War, it was in Chicago that music with a social conscience was first heard. Up till then Curtis Mayfield (1942 - 99) of The Impressions had been trying to keep up with the Motown runaway train by introducing similar styles into his own writing; by 1967 he was already writing and singing about racial and social problems in what became known as the 'Chicago Sound'.

After a dispute over money, producer Mickey Stevenson walked out and Supremes member Florence Ballard was dropped and replaced by Cindy Birdsong. (Florence was depressed and exhausted and did not live much longer.) Gordy, who had served in the Army in Korea from 1951 - 1953 and was a professional boxer prior to that, now fought for his company. He was determined to prove that Motown was built on firm foundations, could survive change and move with the times. Gordy released Love Child by Diana Ross3 and the Supremes, a heart-rending song which carried a deep social message, and it became one of the biggest-selling recordings in Motown's history.

Writer and producer Norman Whitfield (1940 - 2008) and songwriter Barratt Strong became the architects of Motown's psychedelic soul years and the hit machine was back on track.

In 1972 the Motown company moved to Los Angeles, California, and the following year it became Motown Industries. Gordy expanded the company out into film and television outlets as well as recording. Whole groups of different artists toured the US as the 'Motortown Revue', which became popular as one show and as the Motown sound's popularity grew, they toured abroad.

The Motown Sound Lives on

Motown's legacy continued with successful new artists such as Boyz II Men who were signed to Motown Records from 1990 to 2000. Their 1994 platinum-selling hit I'll Make Love To You won a Grammy Award for Best R&B Performance By A Duo Or Group With Vocal and two American music awards; it also won songwriter Kenneth 'Babyface' Edmonds a Grammy for Best R&B Song. When it was knocked off the number one spot after 14 weeks, I'll Make Love To You set a joint4 record in the US for the most weeks spent at the top of the chart.

Today the Motown sound is in safe hands with artists such as India.Arie, whose singer mother, Joyce Simpson once opened for Stevie Wonder; rapper Q-Tip; and soul diva Queen Latifah. Multi-platinum recording artist Brian McKnight, a talented singer, songwriter, musician and producer, (who has worked with Mariah Carey, Vanessa Williams, Justin Timberlake, Willie Nelson and Nelly), has sales of over 16 million records to his name. The living legend Stevie Wonder, who has won 21 Grammy awards (a record for most Grammy awards) continues to perform his music in a career spanning over 40 years.

The dilapidated ten-storey building which was the home of Motown Records from 1968 until 1972 was bulldozed in January 2006, with the area to be resurrected as a parking lot for the facility called 'Ford Field' which housed the Super Bowl XL in Detroit. Normally it is home to NFL Detroit Lions football.

Universal Motown Records Group continues to be known as the largest music company in the USA, and in 2006 its chairman Mel Lewinter is overseeing a division into two separate companies: Universal Motown Records and Universal Republic Records. The UMRG will continue to share the legal, finance and sales departments but will have separate marketing policies, publicity drives and promotional material.

The artists will be divided between the two: Stevie Wonder, India.Arie, Nelly, the Mars Volta, Blue October, Erykah Badu, Akon, Chamillionaire and Lindsay Lohan will go with Universal Motown Records, with Sylvia Rhone as President (since 2004 she was President of Motown Records and executive Vice President of Universal Records).

Monte Lipman (former President of Universal Records and co-founder of Republic Records) will be President of Universal Republic Records, which will represent British Knight of the Realm Sir Elton John, Tamar, Damian Marley, Godsmack, Don Omar, 10 Years, Prince, Jack Johnson, and 3 Doors Down. Despite things you might hear on the grapevine, credible sources reveal that the UMRG split is a business move - not as a result of personal differences between Lipman and Rhone.

When I think of Motown, I think of Smokey Robinson putting poetry to music, Stevie Wonder's heartbreaking lyrics of lost love, The Supremes' big hair and dazzling mini-dresses, and Marvin Gaye mourning the loss of the young soldiers in Vietnam.
- A Motown fan.

1The name was derived from Motor Town, the nickname of Detroit.2They weren't physically together in the studio because Ross was pregnant and Gaye refused to stop smoking marijuana (cannabis).3Ross and Gordy are the parents of Rhonda Ross Kendrick, herself a 'love child'.4Tying with Whitney Houston's 1993 hit I Will Always Love You.