Progressive Rock Content from the guide to life, the universe and everything 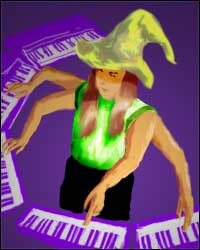 Progressive rock, also known as 'prog-rock', 'classical rock', or 'art-rock', is a unique form of rock and roll music, occurring at the interstice between rock, jazz, and classical music.

Progressive rock was a cultural phenomenon that began in England in the late 1960s, and reached its global peak in popularity in the early 1970s, though it is still a vibrant musical genre today.

Rock and roll, since its development in the early 1950s, has traditionally drawn from rhythm, blues and soul music as its source of primary inspiration and linear progression. The earliest rock musicians, such as Chuck Berry, Little Richard and others, showed a direct link with the blues that would define the vocabulary of rock and roll for years to come. For the first two decades of its existence, rock music was inescapably blues-based, rarely straying outside of the 3-odd minute song structure and 4-4 rhythms of its predecessors.

All that began to change (as many things did) in the late 1960s. Experimentation was rife in western culture, and music was no exception. Nowhere was this more apparent at the time than on the West Coast of the US, and in England.

While their American counterparts drew, quite naturally, upon their own musical heritage of rhythm and blues, most young English rock musicians of the day had been raised in a quite different musical climate. The hymns of the Anglican church and the works of the classical composers were far more ingrained in the British zeitgeist than the works of Count Basie or Duke Ellington. Naturally, it was only a matter of time before the young musicians that sprang forth from this era began to draw upon their own musical heritage, brewing a heady stew, made up of rock, jazz, and classical music together into what would become progressive rock.

The earliest traces of progressive rock can be seen in such albums as Pet Sounds, by the Beach Boys, with its ground-breaking use of the studio as instrument and disregard for conventional song structure, S.F. Sorrow, by the Pretty Things (arguably the world's first concept album), and the psychedelic music of the US west coast, popularised by the Jefferson Airplane, Captain Beefheart, and the Mothers of Invention. The real ground breaking, however, took place across the pond, as, in 1967, the Beatles released Sgt. Pepper's Lonely Hearts Club Band onto an unexpecting and enraptured public.

Sgt Pepper, with its innovative production (that was as much a part of the sound as the musicians), quirky meters, immaculate melodies, printed lyrics (a first), and cover artwork that defined a generation, certainly set the stage for progressive rock, but it would be another 2 years before the genre was truly born, with nothing less than a primal scream.

In 1969, the year the sixties ended and the hippies' dream died, progressive rock literally roared onto the scene; heralding its arrival was the screaming, tortured red visage on the cover of In The Court of the Crimson King: An Observation By King Crimson.

Although there had been other trailblazers, ITCOTCK was the first full-blown progressive rock album, and King Crimson the first true progressive rock band. Led (and still led today) by eccentric, lightning-fingered guitarist Robert Fripp, King Crimson combined blazing guitar fury (that later helped define heavy metal), soft hymnal passages, and free-jazz improvisation into a musical mix unlike anything heard before. The first song on the album, the pre-punk nightmare 21st Century Schizoid Man, is as perfect an encapsulation of progressive rock as there is, and its shrieking riffs and virtuoso-ensemble playing defined the genre (and blew a few unsuspecting speakers as well).

Treading in more uplifting (but no less unconventional) waters were bands like Yes, and Genesis.

Yes, perhaps more representative than any band of the influence of Anglican church music on progressive rock, produced soaring, lengthy paeans to spiritual enlightenment, led always by the unmistakable tenor of Jon Anderson, a former milk-truck driver from the coal-mining town of Accrington. Genesis, born out of two competing soul bands at the exclusive Charterhouse school, took English whimsy and theatrical spectacle to new heights, with their densely Anglo-centric lyrics and singer Peter Gabriel's ever-more outlandish stage costumes, donned while the band tuned up between numbers, to portray the different characters depicted in the songs.

Not all progressive bands shied away from blues-based structures and rhythms, but even those that showed a direct blues influence, such as Jethro Tull, often took that sound and made it quite recognisably their own, adding complex time-signatures and tonal colours to standard blues riffs and phrasings.

The legacy of American free jazz was also a defining influence. The works of such pioneers as Ornette Coleman, Sun Ra, and Miles Davis paved the way for the experimental improvisation and virtuosic interplay that would become a staple of several progressive bands, notably the third incarnation of King Crimson, the Mahavishnu Orchestra (led by Miles Davis' former protege John McLaughlin) and, in a quite different way, Henry Cow.

The popular perception of progressive rock has been summarised in the viewpoint that it is an attempt to 'graft, Frankenstein-like, the head of rock and roll onto the unsuspecting body of classical music'. This viewpoint is reinforced by the memory of such bands as Emerson, Lake, and Palmer, with their interpretations of classical works by Mussorgsky, Copland, Ginastera and others; sometimes performed by Emerson while twirling fifty feet above the crowd, strapped to a revolving grand piano rig while a shirtless Palmer flailed on his stainless-steel drum kit. Nevertheless, in the words of Fred Frith, ELP's adaptions 'are important, because they say something about the compositions and their adaptability, and the suitability of using electric instruments to interpret them.'1

In any case, the adherence to rock and roll rules while appearing to aspire to more 'respectable' heights is one of the factors that proved progressive rock's undoing in the critical and (popular) public eye.

Critical reaction to progressive rock was, in the beginning, as varied and unpredictable as the music itself. Some were enthralled by the attempts to bridge disparate musical genres, and come up with something entirely new; most were reticent at anyone attempting to tamper with rocks' 'pure' heritage, and decried the movement's classical leanings as lofty attempts at bourgeois acceptance at best, and 'insidious befoulment of all that was gutter pure in rock' at worst2.

Unfortunately, it is the latter, most unfair, position that (critical) history has taken on progressive rock over the years. Speculations as to the reason for the critical resistance to progressive rock are myriad, and much has been written on this subject alone, but it can safely be said that, the merits of the music itself aside, rock critics have never been comfortable with any music calling itself 'rock and roll' that does not consciously fit in with 'established' acceptable rock iconography. In simpler terms, if it ain't about chasin' girls, fast cars, and pissing off your parents, then it ain't rock - it's pretentious crap. This seems a ridiculous position and a tenuous basis for criticism of any sort, yet this seems to be the lasting critical consensus (read: bias), and continues to this day.

Opinions of the would-be rock intelligentsia aside, progressive rock was one of the biggest cultural phenomena of the late 1960s and early 1970s. Social theorists have attributed the public embrace of prog rock to many different factors, but in any case, bands like Yes, ELP, and Jethro Tull sold millions of records worldwide and were some of the world's top concert draws for many years.

The most successful, and therefore most well-known progressive rock bands and recordings include:

Progressive rock still flourishes today, with a wealth of bands both new and old still recording and performing, yearly festivals being held for enthusiasts, and an extremely passionate worldwide online fan base and community.

1Frith, quoted in Paul Stump's The Music's All That Matters.2Lester Bangs, regarding Emerson, Lake, and Palmer.3Artists like David Bowie (and contemporary examples such as Marylin Manson) took Gabriel's propensity for theatrical shock value to its next logical step, combining it with pop, and created Glam (or 'glitter') rock, with its gender-bending makeup and elaborate stage shows. This trend hit its nadir in the late 1970s, when it collided head-on with heavy metal, and out of the wreckage rose (some would say regrettably) the most recognisable icons of theatrical rock ever - KISS.