The Drake Equation Content from the guide to life, the universe and everything 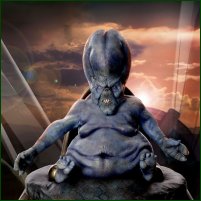 Much-loved by science fiction fans, students and pub bores alike, the Drake Equation - also known as the Greenbank or Drake-Sagan equation - is a way of estimating the chances of successfully finding life on other planets. It is used rather as a bookmaker would calculate the odds in an accumulator, the odds reducing proportionately as each factor is considered. By estimating the number of stars in the Milky Way, then reducing these to, for example, the percentage of those stars that have planets, then to how many of those have the capability to support life, it is possible to arrive at a rough estimate of how many 'communicating civilisations' there may be in the galaxy. (A communicating civilisation is one that has the capability and inclination to try to contact others.) It was devised in 1961 by Frank Drake while he was working for the National Radio Astronomy Observatory in West Virginia, USA in preparation for the first ever 'Search for Extra Terrestrial Intelligence' (or SETI) conference, which he had helped to set up. Drake envisaged the equation as a way of showing where there were gaps in human knowledge in the search for alien life and to clearly mark out areas for further research and not - as commonly misconstrued - to produce an absolute figure of contactable civilisations. As human knowledge advances and we begin to learn more about the universe around us, however, it becomes more possible to work towards a believable estimate.

To arrive at a figure for the number of communicating civilisations in the Milky Way, a figure referred to as N in the equation1, Drake multiplied seven factors together, like this:

Each of these factors is explained below.

N*: The Number of Stars in the Milky Way

You might imagine that we could have a pretty good guess at this figure. After all, surely it involves just having an educated guess based on good astronomical knowledge; far easier than theorising about the chances of intelligent life evolving?

The reality is far trickier. Studies of luminosity have shown that the mass of the galaxy is around 140 billion2 times that of our own sun, give or take 20%; from this we should be able to take off a couple of per cent for interstellar dust, then divide the rest by the mass of the average star. It's this 'average star' that causes the inconvenience; we simply don't know enough about stars to know. Some are much bigger than our sun but contain less mass, while some are smaller but denser. Indeed, even the authoritative mass figure for the whole galaxy is now in some doubt, with many astronomers believing it could be as high as a trillion. One authoritative website, ChView memorably writes on the subject:

fp: The Fraction Of Stars With Planets Around Them

Fortunately, we are building a better idea of numbers of extrasolar planets. New worlds are being discovered all the time; in July 2004 it was claimed that the Hubble telescope had discovered 100 new planets, and another has even apparently been photographed. The good news is that, after years of presuming that only stars like our own sun could support planets, it seems that many others can do the same trick.

ne: The Number of Planets Per Star Capable of Supporting Life

There are believed to be a large number of factors that make Earth habitable. For example, our planet is made of rocks, not gas, and has a stable orbit and it happens to lie in the 1/95th of the solar system where the temperature is acceptable. This area is referred to by scientists as the 'Habitable Zone' or the 'Goldilocks Zone' - where it is neither too hot nor too cold, but just right3. Mars is also considered to be a reasonable bet for 'terraforming', or changing a planet so that it is suitable for humans; it is postulated that microbes could be used to convert carbon dioxide to oxygen, and therefore create a greenhouse effect on colder worlds. Moons that orbit planets that are believed to be unsuitable for life, like gas giants, also hold possibilities. This number may be higher than we might expect from our own experience.

Debate is fierce within the scientific community regarding what makes a planet ecologically habitable, and this Entry makes no effort to resolve this. Was Venus habitable when the Sun was cooler, and will Mars or Saturn's moon Titan be when it becomes hotter? Is the influence of Jupiter key to our survival, acting as it does like a great gravitational magnet for all sorts of dangerous comets and debris? All we know for sure, for now at least, is that one of the nine planets in the solar system certainly does support life.

An important factor when considering the suitability of planets is the history of their host star. The majority of stars are red dwarfs and are not generally considered large or hot enough to support planetary life, whereas young stars have simply not been around for long enough for life to feasibly develop. Binaries and multiple stars are likely to give their planets unsuitably erratic orbits.

fl: The Fraction of These Planets That Evolve Life

Knowing such a small sample of places where life has evolved - just the one - and with a very sketchy knowledge of how life begins, this is pure guesswork. Some believe (and it comes down to belief at this stage) that life will evolve anywhere it is possible for it to do so, whereas others would contend that it is a rare and miraculous event. Stuart Kauffman, in his book At Home In The Universe, sets out his 'autocatalytic set theory' which makes a compelling case for the former.

fi: The Fraction of This Life That Becomes Intelligent

Again, it is very hard to make a decent guess at this figure. Drake did not define his 'intelligent' - intelligent enough to use tools? To communicate with one another? Or barely enough to sell double glazing?

Most living creatures show signs of intelligence, but any actual figure is necessarily arbitrary and must depend upon the observer's expectations. Some believe intelligence is such an important evolutionary tool that it is certain to develop, others that it is not so.

fc: The Fraction Of Intelligent Life Which Communicates

Alien civilisations may also be unable to communicate for other reasons; the local atmosphere could block the passage of radio waves and stellar objects such as nebulae or pulsars could also affect communication.

fL: The Fraction Of The Planet's Life For Which The Communicating Civilisation Lives

Using our own planet as a basis for this figure, we could say that the earth is expected to be habitable for ten billion years. We've only been using radio waves for a little under 100 years, therefore so far we've only been a 'communicating civilisation' for around a hundred millionth of our planet's existence.

For most people, the fun of the Drake Equation lies in putting their own numbers in and finding out how many civilisations in the galaxy they could communicate with. As we said at the start, the equation is fairly simple to use; just multiply all your answers together:

An example of the equation in use would be as follows:

These figures would give a total of 72 civilisations out there in the galaxy somewhere, waiting to receive our radio waves. Whatever your opinion on the figures above, it's well worth having a go for yourself.

The Drake Equation has been used to estimate that civilisations in the galaxy are around 200 light years apart, on average. As Bill Bryson notes in his book, A Short History of Nearly Everything:

...even if these beings know we are here and are somehow able to see us in their telescopes, they're watching light that left earth two hundred years ago...they're watching the French Revolution and Thomas Jefferson and people in silk stockings and wigs [and] make their electricity by rubbing a rod of amber with a piece of fur and think that's quite a trick. Any message we receive from these observers is likely to begin 'Dear Sire' and congratulate us on the handsomeness of our horses and our mastery of whale oil.

Frank Drake is now Director of the SETI Institute and Chairman of its board of trustees. His hobbies are listed as gem-cutting and growing orchids.

1The fact that we are here would seem to imply beyond any doubt that N is greater than, or equal to, one.2The word 'billion' is used throughout this entry to represent 1,000,000,000, or 109. This convention of using the 'American' billion has been adopted by British scientists as well as the media at large.3This Goldilocks analogy is also used in such diverse fields as economics, universe expansion theory and cystic fibrosis.