Orchids Content from the guide to life, the universe and everything 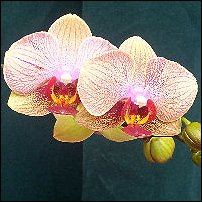 Orchids are one of the most fascinating flowering plants on the face of the Earth. They are arguably second only to carnivorous plants in the degree of specialization they exhibit. There are thousands of varieties of orchids, and they can be found all over the world, although most hail from the tropics.

Orchids have several notable features. The first is that they are capable of breeding across species. This is rare in plants and even rarer in animals. For example, a white oak and a red oak cannot be bred. Even in the rare case that two species will breed, the hybrid offspring is almost always sterile. Not so the offspring of disparate orchids: there are endless examples of cross-bred species that produce fertile offspring. This is one source of the popularity of the orchid; the possibilities for cross-breeding and creating new varieties are endless.

Another fascinating quality of orchids is their reproductive cycle. A single orchid flower produces a seed pod that contain millions of seeds. The seeds are so tiny they could easily be mistaken for pollen - to the unaided eye it is simply dust. Unlike most seeds, the orchid seed contains no food for the embryonic plant. Instead the seed must rely on falling into an area where there is a sufficient supply of nutrients (rotting vegetation or the like) to allow germination and growth until the seedling develops enough to provide its own nutrition through photosynthesis and its root system. Some of the terrestrial (ground-dwelling) orchids like the Pink Lady-Slipper1 have a complex life-cycle which as yet has not been reproduced in the lab - it has so far proved impossible to cultivate these orchids artificially. Many orchids can be cultivated indoors which is a complex process that involves growing the seedlings on plates of nutrients similar to the agar gels that medical laboratories cultivate microbes on. The process must be carried out under totally sterile conditions to avoid contamination by bacteria, moulds and yeasts.

Like many plants, most orchids rely on just one or a few specific pollinators to propagate. However, they exhibit a fascinating range of tactics to entice the particular insect to do its work. These range from systems of aligned hairs that force the insect to travel through the floral structure in a particular direction, to appendages that mimic the pollinator so that real insects attempt sexual intercourse with the simulacrum (decoy). Sadly, it is this dependence on particular pollinator species, along with the destruction of habitat, which has caused the extinction or the endangered status of so many species of this fascinating plant.

1The Pink Lady-Slipper is the state flower of Minnesota, USA.