Occurrences of 42 in Astronomy Content from the guide to life, the universe and everything 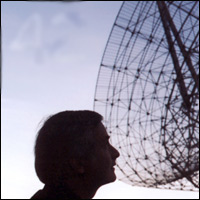 42 is a very special number, the Researchers on this website know that it is A68555. This particular Entry tries to collate all the notable occurrences of the number 42 in astronomy.

Neptune has a faint ring system; the individual rings are named after astronomers associated with the planet. Galatea is the shepherd moon for the Adams Ring, named after John Couch Adams. Astronomers have counted the number of gravitational grooves carved out of the Adams Ring and it numbers 42, which is an incredible coincidence involving someone named Adams!

Named after the tragic heroine in Shakespeare's black comedy Romeo and Juliet, this small moon of Uranus has an equatorial radius of 42km.

Slightly larger than our own Moon, Io orbits its own planet Jupiter once every 42 hours at a distance of 420,000km! Jupiter's third-largest (and closest) moon was discovered by Galileo Galilei (1564 - 1642) on 7 January, 1610. This was a period in time when most people believed in the geocentric1 system favoured by Aristotle, Plato and Ptolemy.

During this period in history it was extremely dangerous to publicly express your views if they clashed with those of the Roman Catholic Church, which had the power to charge 'blasphemers' with heresy and order their executions. Because he believed in the heliocentric theory2 and talked about Jupiter's moons revolving around it (and therefore not the Earth), Galileo was imprisoned under house arrest for the rest of his life.

We now know that heliocentrism, also promoted by the likes of Nicolaus Copernicus (1473-1543), Johannes Kepler (1571-1630) and Giordano Bruno (1548-16003), is true. Thanks to technological advancements we are able to study the Jovian4 system more closely. For instance, we now know that fiery Io is the most volcanic body in our Solar System; its surface bubbles like the cheese topping of a pizza while it is cooking.

French astronomer Charles Messier compiled a famous catalogue of 'non-comets' which we still refer to today. In Messier's list, M42 is the awesome Orion Nebula. In a really neat coincidence, the spectroscopic binary star system 42 Orionis is located in M42.

On a clear, dark night you should be able to see the Orion Nebula just below the triple-star 'belt' of Orion 'the Hunter'. The nebula is a stellar nursery, a cloud of glowing gas and dust where new stars are being formed. The American Museum of Natural History produced an 'artistic impression' of a flight through the nebula.

The New General Catalogue was compiled by John Louis Emil Dreyer (director of the Armagh Observatory from 1882 - 1916). This was later expanded to include newer discoveries, and is being continually updated as the NGC/IC Project. NGC 42 is an elliptical galaxy in the direction of the constellation Pegasus 'the Winged Horse'. Barely visible at +15 magnitude, NGC 42 is also catalogued Marth 7.

IC 42 is a spiral galaxy in the direction of the southern constellation Cetus 'the Whale'. Dreyer described IC 42 as 'S (spiral); irregular; v dif (very diffuse)' – and no wonder, it is extremely dim at +16 magnitude.

Sir Patrick Moore has created his own catalogue of challenges for the amateur astronomer, the Caldwell Catalogue. On his list, Caldwell 42 is NGC 7006, a globular cluster in the direction of the constellation Delphinus 'the Dolphin'. Its distance from the Sun has been measured at 135,400 light years5.

The Collinder Catalogue was published in 1931 by Swedish astronomer Per Collinder (1890 - 1974). The collection consists of only star clusters, and his Cr 42 is the most famous star cluster of all: The Pleiades in Taurus 'the Bull'.

Abell 42 is a planetary nebula in Ophiuchus 'the Serpent Bearer'. Its visible magnitude is +14.6, and its central white dwarf is only +20 mag, so you'd need specialist equipment to view it.

South African amateur astronomer Jack Caister Bennett (1914 - 90) was a comet hunter who discovered comets 1969i and 1974h. He became the first amateur astronomer in history to make the first visual discovery of a supernova in another galaxy (M83). He compiled two catalogues of his observations of the southern sky which have been accumulated into the Bennett Catalogue, although none of these are unique discoveries. Bennett 42 (also catalogued NGC 3115) has the common name the Spindle Galaxy. First detected by Sir William Herschel in February 1787, it is an edge-on lenticular galaxy 30 million light years distant in the direction of Sextans 'the Sextant'. Lenticular galaxies are a cross between spiral and elliptical, with lots of stellar dust giving off a halo effect.

Some constellations are bigger in area than others, and contain more stars. The 'Flamsteed designation', named after the first Astronomer Royal who devised the system, is the number of the star plus the genitive form of the constellation, eg 42 Tauri is one of the stars of Taurus. 42 Tauri also has a Bayer designation, which is a Greek letter plus genitive: psi Tauri (ψ Tau). 42 Andromedae, also known as phi (φ) And is a blue-white subgiant binary system.

The white giant star 42 Cancri is a member of the Beehive Cluster, also known as Praesepe and M44.

42 Arietis, also pi (π) Ari, is a triple star system comprising a blue-white dwarf and a white dwarf which form a spectroscopic binary pair, and a further, more distant companion which is a yellow-white dwarf.

The star 42 Cygni is what is classified a 'post-AGB star' – which means it has passed asymptotic giant branch (AGB) status. In a nutshell this star is nearing the end of its final stage of evolution; it has run out of hydrogen and shrunk to white sub-giant status from red giant. It will eventually end up as just a white dwarf star.

The constellation Coma Berenices holds the honour of being the 42nd-largest in area of the 88 officially recognised constellations. The star 42 Com is a binary companion to the alpha-designated star Diadem, so 42 Com also has the description Alpha Com B. They are a pair of white dwarfs taking 25.85 years to complete an orbit.

The yellow dwarf 42 Capricorni is a variable star of the RS Canum Venaticorum6 type. In the variable star catalogue these stars are listed with English capital letters, ergo 42 Cap is also known as BY Cap.

In 2011 a star named WASP-42 was found to have a gas giant planet in close orbit around it. As it was the first discovered in that stellar system, the planet was given the designation WASP-42 b.

The red dwarf star Kepler-42 in Cygnus has three planets in orbit, they are all hot rocky worlds.

Studies by the Hubble Space Telescope show that semi-planet Quaoar orbits the Sun at a distance of 42 AU (Astronomical Units). That is 42 times the distance between the Sun and the Earth!

There's a crater on the Moon which is 42 thousand meters deep - Blanchinus crater, named after the Italian astronomer Giovanni Bianchini (1410-69). Just before first quarter, Blanchinus and two adjoining craters' walls are lit by sunlight while the craters themselves are in darkness, forming an 'X' shape.

The orange dwarf star CoRoT-2 in the constellation Serpens has a gas giant planet CoRoT-2 b which completes an orbit in 42 hours. As you'd expect from a planet so close to its star, the temperature is far too hot for life (as we know it) to be considered.

Comet Hale-Bopp visited the inner Solar System in 1996-7. This was not the first time it had swung by to say hello, astronomers calculated from its orbit that it had visited before, around 42 hundred years ago! It wasn't called Comet Hale-Bopp then though. Here on Earth the ancient Egyptians were inscribing hieroglyphs in their tombs, and 6th Dynasty Pharaoh Pepi II was their ruler.

The alpha-designated star of the constellation Auriga 'the Charioteer' is 42 light years distant. Alpha Aurigae has the common name Capella, which means 'little she-goat'. Capella is a first magnitude star and is a 'spectroscopic double': a binary pair of yellow stars orbited by another couple of red dwarf stars, all in the same system. To the naked eye Capella sparkles like a jewel and flashes different colours as one watches.

HD 40307 resides 42 light years away in the small southern constellation Pictor 'the Painter's Easel'. 'HD' stands for Dr Henry Draper, an amateur astronomer whose pioneering hobby was photographing stars and the Moon. He was the first person to photograph M42, the Orion Nebula. After his untimely death aged just 45 in 1882, his widow Anna Mary sponsored the cataloguing of the stars in his memory. The enormous task was entrusted to Prof Edward Pickering at Harvard College Observatory, who designated the work to his assistant Williamina Fleming and other women, known in astronomy circles at the time as 'Pickering's Harem'. The resulting data became the Henry Draper Catalogue of Stellar Spectra and the system is still being added to today. There are now over a quarter of a million stars catalogued according to their spectra, each with an HD number.

Astronomers are very excited about the star HD 40307 because it boasts a solar system containing rocky planets like the Earth. On 16 June, 2008, it was announced that three extrasolar planets had been detected in orbit around the orange dwarf star, which is less massive than our own Sun but roughly the same age and temperature. The three planets observe perfectly circular tracks around their star, but all of them orbit too closely for life to be possible. However, this particular solar system is still being studied in the hopes of discovering a planet inhabiting the 'Goldilocks Zone' (the colloquial term for the habitable zone), where the temperature is just right for water to exist in liquid form.

The star 55 Cancri A also has the designations Rho1 Cancri7 and HD 757328, and it is almost 42 light years distant from us, but that's not what makes 55 Cancri A special. At 6th magnitude, the yellow dwarf is approximately the same mass as our own Sun, and it rotates in 42 days. As if that's not appealing enough to whet your appetite, the 55 Cancri A system has a family of planets in orbit – a count of five up to the latest discovery in 2007.

There is a drop-dead gorgeous emission nebula beyond Norma, the Set Square constellation, coincidentally 4,200 light years away. Its catalogue reference is NGC 6164 and it is so far unnamed, which is a shame. Its gorgeous pale-petalled flower display would inspire poets if such masters were still around.

Yes, there's a galaxy, an edge-on spiral, which is 42m light years distant. Located in the direction of Pegasus, it's classified as NGC 73319 and Caldwell 30. It was discovered by Sir William Herschel (h 2172) in 1784, a time prior to knowledge about galaxies other than our own. William Parsons10, the 3rd Earl of Rosse (Lord Rosse) was President of the Royal Society from 1848 to 1854. Lord Rosse catalogued NGC 7331 in his list of 'spiral or curvilinear nebulae' of 1850. Supernova SN 1959D was witnessed in this galaxy in 1959, although the actual stellar explosion took place 42 million years ago!

1Geocentrism is the belief that the Earth is centre of the Universe with all the other celestial bodies revolving around it.2Where the Sun is the central body and everything else in the Solar System orbits it.3This was not a natural death. Bruno was sentenced to be roasted alive at the stake by the Catholic Inquisition for refusing to recant his beliefs.4Belonging to the family of Jupiter.5A 'light year' is the distance light travels in one year, roughly 5.88 trillion miles or 9.46 trillion km.6RS Canum Venaticorum is the prototype for this kind of variable star.7The Greek letter combined with the genitive of the constellation name is known as the 'Bayer designation', after the man who devised the system. 8HD stands for the Henry Draper catalogue.9Is it a coincidence that (7×3)×(3-1) = 42?10He's probably best remembered for his 1844 sketch of the supernova remnant the Crab Nebula.