Numbers Content from the guide to life, the universe and everything 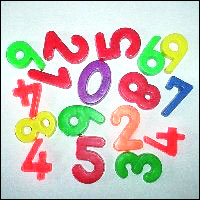 Originally invented for the purpose of counting, those peculiar creations known as 'numbers' have become endowed with special meaning. Numbers were originally created not as entities in themselves, but as conceptual tools which turned out to be somewhat useful for solving problems, doing mathematics, and answering questions such as 'How many angels can fit on the head of a pin?' In recent times, geologically speaking, numbers have gained an existence of their own. Certain numbers have become unlucky, while others have become sexual innuendoes. Numbers can be natural, imaginary, or even perfect. Here's some good advice for those who are unfamiliar with numbers.

1. Learn how many Fingers the Local Inhabitants have

The standard system for writing numbers is based on the number of fingers per person (barring injury and genetic mutation). This system is probably one of the more clever things that we have generated, despite our awful choice of a base number (ten). Since the number of fingers per hand and the number of hands per person are both prime, our base number only has two factors, causing all sorts of annoying little problems like repeating decimals for relatively simple fractions, and messy multiplication algorithms.

Many years ago, people got into the habit of using letters as numbers. This caused a problem with paper, primarily because there wasn't any. Writing materials were scarce, so when it came to large numbers, there wasn't enough space for them. The Romans* thought they had solved this problem by allowing certain letters to stand for very large numbers. While this was considered satisfactory for many years, people found the fact that CMXCIX and M were consecutive numbers just a little counter-intuitive1. It also necessitated coming up with two new letters every time the number was multiplied by ten.

It was about this time that some genius realised that there already was a fantastically efficient method for keeping track of arbitrarily large numbers. Contrary to popular belief, the abacus was not a musical instrument, nor was it a convenient way for women to keep track of their jewellery. The abacus functioned on the simple principle that when you ran out of beads on any particular column, you merely reset that column and flipped over one bead in the column to the left. This brilliant person, who probably never really existed, used a set of ten symbols to represent the number of beads on any particular column and just strung them together exactly as if it were a tiny little abacus on paper (or whatever they were using at the time). The only tricky part was that there needed to be a symbol for no beads. So, borrowing a little symbol that the Babylonians had used to represent nothing, the method was complete!

2. Never Argue with a Mathematician over the Reality of Numbers

Humans have always enjoyed naming things, and mathematicians are no different. While they usually name theorems, functions, formulae, and other gimmickry after each other, they have adopted a different practice with respect to the naming of sets of numbers and number classifications. Real numbers are just as real as imaginary numbers, irrational numbers do make sense, and surreal numbers are not the labels on the soft watches in Dali's The Persistence of Memory. Way back in the times when men got dates by thwacking them over the head with clubs and dragging them home by their hair, most cultures didn't really have numbers. Some had rough equivalents of the words 'a,' 'couple,' and 'lots'*. Eventually, the rest of what have become known as the 'whole numbers' were invented, and the long-standing tradition of adding more numbers to the system had begun. The next number to be introduced to the ranks was zero. It's not as if people didn't talk about nothing back then, but it wasn't really a number until it became useful as a place keeper in the digital numbering system. This new numbering system, which started at zero instead of one, became known as the 'natural numbers'*.

Nobody is quite sure where negative numbers came from, but it was probably someone who made the mistake of starting to count something in the middle. Measuring altitude from sea level or temperature from the freezing point of water both raise problems because there are places below sea level and the temperature of the air does indeed drop below freezing occasionally, as can be attested to by any skier. The introduction of negative numbers to the system results in what are called the integers. Elementary school students regularly put up quite a fuss when told about these numbers. This is not because they have difficulties with the concepts, as is popularly believed, but simply because they had been lied to. The practice of referring to certain mathematical operations as 'illegal' or 'bad' is probably one of the biggest sources of the world-famous generation gap. It's not much of a jump from the integers to what are called the rational numbers. Anyone who has ever ordered a coconut creme pie at a restaurant and has been delivered the entire pie (as well as a bill for the entire pie) knows the necessity of fractions.

It wasn't long before everyone realised that not all numbers could be written as fractions. These numbers weren't particularly nice, so they were instantly called irrational. Most examples of irrational numbers involve the square roots of numbers, although cube roots, fourth roots, and even higher roots* are also possible. Some of these annoying irrational numbers were eventually incorporated into the number system, resulting in the set of algebraic numbers, so called because all algebraic numbers are solutions to the algebraic equations consisting entirely of adding and multiplying numbers and variables.

For a very long time, mathematicians believed that they had finally found every possible number that made any sense whatsoever. They were so afraid of the possibility of more numbers that the first man to prove that there were numbers that transcended the definition of algebraic numbers was immediately thrown over the edge of the boat on which he was sailing. But you can't keep a good mathematician down, and eventually these transcendental numbers were accepted into the numbering system, creating the real numbers. Incidentally, there are quite a lot more transcendental numbers than there are algebraic numbers, even though there are an infinite number of both. This doesn't make a whole lot of sense to most non-mathematicians, so we suggest the last rule below.

Most people don't have much difficulty with any of the real numbers, however ugly they may be. But since mathematicians are perverse little buggers who aren't satisfied until they are the only people on the planet who can understand what they're talking about, they decided that there needed to be more numbers. Using the excuse that no one had ever decided what the square root of a negative number was, they created a whole new set of numbers, all multiples of the square root of one. Since they quite obviously were not real numbers, they were termed 'imaginary numbers'. This opened up a whole new realm of complicated numbers consisting of real numbers, imaginary numbers, and any sum of the two which have become quite understandably known as complex numbers.

3. Don't do Arithmetic with Infinity

This is one of the fastest ways to annoy a mathematician. Infinities don't play nicely with other numbers, so avoid them at all costs.

1In reality, the Romans didn't use the 'subtractive principle' where CM means 900, XC means 90 and IX means 9. These are a relatively modern invention. The Romans wrote 999 as DCCCCLXXXXVIIII, which looks even less likely to be consecutive with M.