The Liar's Paradox Content from the guide to life, the universe and everything 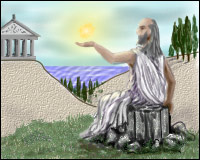 Imagine if you will that you are back in 6 BC when it was fashionable to wear your bedclothes out for a day. A philosopher from Crete named Epimenides is completely and utterly not at all contented with his fellow citizens and exclaims 'All Cretans are liars!'. This is an interesting statement, coming from a Cretan because:

Because Epimenides didn't contradict himself in the second case (when he was lying), the statement 'All Cretans are liars' coming from a Cretan implies that there is at least one Cretan who isn't a liar. Note that, 'not all apples are green' is the same as 'there exists an apple that isn't green'.

OK. So lets refine his statement a little. Suppose Epimenides had said 'I am a liar':

So, if someone proclaims that they are a liar, it means that they sometimes tell the truth.

Now, ancient Greeks being ancient Greeks, took this one step further. Eubulides living in 4 BC decided to say 'I am lying'. Since we have a little tradition going:

This is known as the Liar's Paradox. It was completely generalised in 14 AD by a French philosopher named Jean Buridan who wrote;

All statements on this page are false.

... on an otherwise blank page. Buridan also owned a donkey which starved to death while standing in between two identical bales of hay unable to choose one over the other.

In the 20th Century a baby was born in the Czech Republic (then Austria-Hungary) and grew up to be a very clever (and paranoid) man called Kurt Gödel who used the Liar's Paradox to prove that there are some things you can't prove; his Incompleteness Theorem, for example.