Red Stars are the Coolest Content from the guide to life, the universe and everything 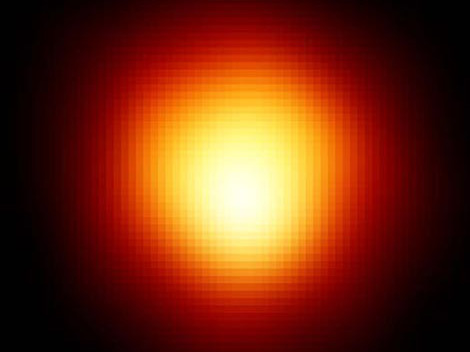 Not all stars sparkle like diamonds. This Entry will tell you about the kinds of stars which are as red as the blood in your veins.

Here on Earth we talk about things which are 'red-hot' but in space red stars are the ones with the coolest surface temperatures when compared to the much-hotter blue stars. An average temperature for a red star would be 3-4,000°C. Red stars are classified 'M' on the Hertzsprung-Russell Diagram. They can be any size or mass, ranging from supergiant Betelgeuse (alpha Orionis), to the smaller types known as red dwarfs.

Astronomers believe that red dwarfs are the most common stars in the Universe. In fact, 19 of the top 30 nearby stars are red dwarfs. They last much longer than the more massive, brighter stars because they burn1 their fuel much more slowly. The closest star to our own Sun, lying just 4.2 light years distant, is a red dwarf called Proxima Centauri2. This and all the other red dwarfs are too dim to be seen by the naked eye. Other red dwarfs in our galaxy include the 20 light year distant local neighbour Gliese 581 which has a triple planetary system. GJ 1061 in the southern constellation Horologium is just 12 light years away – at only 10% of our Sun's mass, this is one of the smallest stars known. Kepler-32 is a red dwarf which is part of the Cygnus constellation. Up to 2013, five planets had been detected in orbit around it, all very close to their parent star.

Local red dwarf stars are a staple in the science fiction universe, for example:

Note: the above stars are real, but unfortunately you would need specialist equipment to see them.

Our own Sun is a yellow star about halfway through its life cycle. When it has finished turning all its hydrogen into helium, its outer shell will swell and as it cools so its colour will redden. Eventually this 'new' red giant star will reach critical point when it will simply burst, creating a beautiful planetary nebula. We won't be around to witness this, unfortunately. By that time the dying Sun will have swallowed Mercury and Venus, and the Earth will be toast. Don't panic though, this won't happen for another five billion years or so. The inner, white-hot core of ultra-dense material is known as a white dwarf and after all the helium gas has blown away, this is all that will remain.

Antares (alpha Scorpii) is a red supergiant of the first magnitude. It is 400 times larger and 10,000 times brighter than our own Sun. Antares is one of the four 'Royal Stars' in Mesopotamian culture, the others being Aldebaran (alpha Tauri), Regulus (alpha Leonis) and Fomalhaut (alpha Piscis Austrini). The Romans knew Antares as Cor Scorpionis (the heart of the scorpion), and in some cultures this red star represents the Archangel Oriel.

Kappa Crucis is a red supergiant nestling in NGC 4755, an open cluster containing over 100 stars more than 6,400 light years distant. NGC 4755 contains mostly blue stars so kappa is quite outstanding amongst them. For this reason NGC 4755 is also known as the Kappa Crucis Cluster. John Herschel, (son of William), once described the cluster as 'a casket of variously coloured precious stones' so NGC 4755 is colloquially known as 'Herschel's Jewel Box' in his honour. Sir Patrick Moore also took a fancy to this gorgeous cluster, featuring it as number 94 in his Caldwell Catalogue.

Mu Cephei, also known as Herschel's Garnet Star, is well-known to amateur astronomers in the Northern Hemisphere. Its red colour is so strong that it looks completely different to all the other stars around it. As well as being one of the largest stars in our galaxy, it is one of the most luminous known and is the prototype for the class of Mu Cephei variables.

Omicron Ceti has the common name Mira, meaning 'the amazing one', which certainly lives up to its name. It is a red giant star which varies between +2 and +10 in magnitude. As Mira travels through interstellar space at 130km/s it leaves behind a trail of stellar material almost 13 light years3 long. Mira has a white dwarf binary companion, VZ Ceti, at 65 AU (astronomical units) distance, which is more than twice the distance between our Sun and its most distant planet Neptune. Mira's partner used to be a red star, but that's another story.

Red giants with an abundance of carbon in their make-up are called carbon stars. A carbon star has such a cool surface that simple carbon molecules can exist in the star's outer atmosphere. These filter out the bluer colours from the star's spectrum, making these stars appear an even deeper red than normal red stars. They are classified as C-type stars.

Depending on the mass of the star, when it runs out of nuclear fuel it will either cast off its outer gaseous layer and create a nebula, or go supernova. The exploding star ejects chemical elements into space but none of it goes to waste. Some of the material helps create new stars. Other elements are utilised elsewhere and for human beings, beneficially so. The carbon in your body was manufactured in the heart of such a star.

Here on Earth there are red stars aplenty, featuring in art, business and culture. Examples include:

Image credit: NASA
1This is a nuclear reaction rather than a chemical one.2Proxima meaning 'close'.3A light year is the distance light travels in one year, roughly 5.88 trillion miles or 9.46 trillion km.4A star whose luminosity changes, which could be due to its being transited or eclipsed by a companion, or because of changes in its mass over short periods of time.5Although Aldebaran is a first magnitude orange giant star, it has a reddish hue. Interestingly Aldebaran has a red dwarf binary companion, alpha Tauri B, which only scientific instruments can detect.