Flags Content from the guide to life, the universe and everything 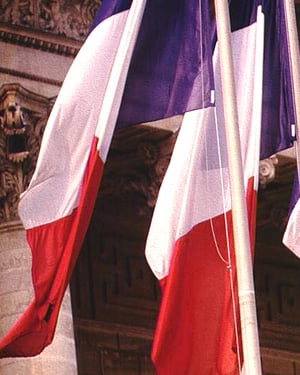 A flag is a piece of coloured cloth, normally rectangular, which is hung from a pole so that it can be stretched out by the wind and the image on the flag can be seen from a distance. Flags are normally used as symbols of countries, cities or occasionally companies. They can also be used for signalling, although this is rare now that we have global telecommunications networks.

There are various names for flags flying on ships, such as 'jack', 'ensign', 'pennant' etc. We'd rather not get bogged down in too much detail here, so you'll just have to look those up elsewhere.

Flags appear to have been invented in China. They arrived in Europe gradually and their use then spread from Europe to the rest of the world. The ancient Greeks, Romans and Egyptians didn't use them, instead using standards, a carved wooden figure on a pole, to lead troops in battle.

It's difficult to find out exactly when flags arrived in Europe, because historical accounts used the same word for them (vexillium) as for the old Roman standards. The Bayeux Tapestry, which was probably completed in 1077 AD, shows knights with flags hanging from their lances, proving that flags had definitely arrived in Europe by this date.

Components of a Flag

The language of heraldry ('blazonry') was invented to describe coats of arms, the complicated patterns by which knights in armour could be told apart. This language is sometimes used to describe flags, but in general people are much freer when describing flags. The main terms to know when describing a flag are:

One of the most popular symbols to appear on flags is the star. More than 40 countries have stars on their flag, ranging from a single star, for example Chile, to 50 stars in the flag of the United States of America.

In some cases, the stars are intended to be an actual representation of the stars in the sky, such as the flags of Brazil (a 27-star map of the southern skies) or New Zealand (a four-star depiction of the Southern Cross constellation). Usually, though, the stars are symbolic. In the case of the United States flag, each star represents a State of the Union.

The star and crescent moon together are a symbol of Islam. This combination appears on the flags of many Islamic countries, including Turkey, Tunisia, Malaysia, Pakistan, Mauritania and Azerbaijan. It is also in a modified form with more stars on the flags of Uzbekistan, Turkmenistan and Singapore.

Some flags have complex coats of arms and seals on them. In this category are Ecuador, Spain, Portugal, Peru, Bolivia and many small countries such as San Marino, Belize and Moldova. In general the smaller the country, the more complex they seem to want their flag.

There's no restriction on what sort of devices can be added to a flag, and some fairly unusual ones have been used across the world. Here's a sample:

The Danish flag has the distinction of being the oldest national flag still in use. It is a plain white cross on a red background, but the cross is not centred - the vertical bar is positioned closer to the flagpole than to the free end of the flag, so that the left arm of the cross is much shorter than the right one, and the red sections to the left of the vertical bar are squares.

Legend has it that this flag fell from the sky, apparently directly from God, during a battle. The Danish king caught the flag before it touched the ground. He waved it and his side was encouraged to fight and they won the battle. This legend was first written down in the 16th Century, but there is clear evidence that the flag was in use as early as the 14th Century.

The Danish flag became the model for the flags of all the Scandinavian countries: Sweden uses a yellow cross on a blue background, Norway is blue on red, Iceland is red on blue, while Finland is blue on white.

The United Kingdom of Great Britain and Northern Ireland has a flag which is known as the Union Jack or Union Flag1. This uses three crosses of two different types: a regular one and one like a letter X, known as a saltire. The blue background and the white saltire represent Scotland, the red cross is England and the red saltire is (Northern) Ireland.

The French national flag is called the 'Tricolour', because it has three vertical coloured stripes. Many countries use tricolours, but the French one was the first, adopted by the French revolutionaries when they first executed their king and created a republic.

The United States of America created a new flag when they achieved independence from England. They made a background of 13 stripes (7 red and 6 white), and on a blue rectangle in the canton they put 13 white stars. Each stripe and each star represented one of the states of the United States.

Originally, they didn't specify any particular arrangement for the 13 stars, and various patterns were used. The most common one had the 13 stars in a circle, but there were other arrangements as well.

The constellation of the Southern Cross (Crux) is featured on the flags of a number of Pacific countries:

Most people will recognise the black flag with a white skull and crossed bones. It is the standard of piracy and is known as the Jolly Roger. In fact, many different pirates and privateers2 had their own personal flags. The skull and crossed cutlasses featured in the 'Pirates of the Caribbean' movies was the flag of 'Calico' Jack Rackham. The most famous pirate of all was probably Edward Teach, known as 'Blackbeard'. His flag featured a skeleton holding a spear piercing a giant heart.

Flags of One Colour

Then raise the scarlet standard high,
Within its shade we'll live and die,
Though cowards flinch and traitors sneer,
We'll keep the red flag flying here.

The simplest flag is all one colour, with no device or insignia. Despite being so simple, such flags are rare, because there are only a limited number of colours that can be easily distinguished from each other.

Because flags are symbolic of countries, there is an etiquette concerning their use. Respect for the country is accompanied by respect for their flag, and insulting the flag is considered an insult to the country. Some countries have a documented 'flag code', detailing what can and can't be done with the flag. The USA's flag code is probably the most detailed. It includes rules for flying the flag within United States Territory, such as:

Flying a flag at half mast - that is, half way up the pole - is a sign of mourning. It is often done when some notable person has died, as a sign of respect.

This practice almost caused a major incident when the UK's Princess Diana died suddenly in a car crash. It was known that Diana was not a great favourite of the ruling monarch, Elizabeth II. The Queen was on holiday in Balmoral Castle in Scotland. While the rest of the nation mourned the death of their favourite princess, the flag at Balmoral continued to fly at full mast, as though the Queen was deliberately flaunting her dislike of her ex-daughter-in-law. In fact, the rule governing the flag in Balmoral was that it was always flown at full mast when the Queen was in residence. When the protests of the people were made known to her, Elizabeth quickly ordered the flag to be lowered to half-mast, a symbol which for more than a thousand years had been reserved for the death of a monarch. In another change of tradition, she also arranged for a Union Flag to be flown at half mast at Buckingham Palace, her residence in London. Prior to this, no flag had been flown when the queen was away on holidays.

Flying the flag upside down is a traditional sign of distress in the UK and the USA. Bear in mind, though that it is quite difficult to tell when a Union Flag is upside down, and people flying an inverted American flag run the risk of being considered unpatriotic.

Before the advent of radio communications, the easiest way for ships to signal to each other and to the port was by the use of flags. Flag codes were used, where combinations of different flags meant different things. The modern International Flag Code has 26 different flags representing the letters of the alphabet and another 10 representing the digits 0 to 9. While these could be used to spell out messages, most of them also have a particular meaning when used individually. The most famous of these is the white flag with a thick blue border which represents the letter P. Known as the 'Blue Peter', its meaning is 'The ship is about to sail'.

Probably the most extreme example of ship-to-ship signalling by flags was Nelson's message to his fleet before the Battle of Trafalgar: 'England expects that every man will do his duty'. In the code of the British Navy, every word except for the last one had a specific code symbol of three flags, while the word 'duty' was spelled out with two flags per letter. The original message had 'confides' (meaning 'is confident') in place of 'expects' but the flag officer pointed out that there was no code in the book for this word, so it would have to be spelled out letter by letter.

Some h2g2 Entries about flags

1Union Jack is the older name, and the name under which the flag was adopted as the national flag. Recently, some people have started saying the name 'Jack' should only be used when the flag is flown at sea. Be nice to them.2A privateer is a pirate employed by one country to attack the ships of other countries.