Legends of Pirates and Piracy Content from the guide to life, the universe and everything 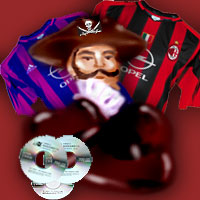 Pirates or 'pyrates', as it is sometimes spelled, have existed since people took to sailing the seas - from the ancient Greek times to the modern day. It is unusual to meet a person who has not read a pirate book or watched a pirate film, yet few people have any factual knowledge of piracy. Presumably that is why you are here.

Piracy is defined by the Merriam-Webster's Dictionary of Law as 'an illegal act of violence, detention, or plunder committed for private ends by crew or passengers of a private ship or aircraft against another ship or aircraft on the high seas or in a place outside the jurisdiction of any state'. In modern times the infringement of a copyright is also often referred to as 'piracy'.

One of the oldest descriptions of piracy comes from 1350 BC, the time of Pharaoh Akhenaten. During this era, there was as yet no name for those who committed such acts. Plutarch, the Greek historian, gave the first definition of piracy - an illegal attack on a ship or coastal city. The actual term 'pirate' (or peirato) was first used by a Roman historian named Polybius around 140 BC. The definition that most closely resembles the modern one was finally decided in the 18th Century.

Interestingly, submarine warfare was initially regarded by some as cowardly behaviour and a submarine's crew as no better than pirates. The Controller of the Royal Navy at the start of the 20th Century said that 'the crews of all submarines captured should be treated as pirates and hanged'.

The Types of Pirates

There are many names for pirates that are often used - from 'buccaneers' to 'corsairs' - what most people don't know is that these names are not interchangeable.

A 'pirate' was someone who preyed on ships of every nation. He owed allegiance to no country and worked only for his own profit.

'Privateers' were legally sanctioned pirates. They were commissioned by a government to attack the enemies of that nation. They were often given a document called a Letter of Marque, which was official authorisation to attack enemy ships. Technically a privateer could not be prosecuted as a pirate because he was protected by international law. Many true pirates forged authorisation in order to avoid prosecution and an equal number of privateers became pirates. Unfortunately for the privateers, hostile nations often would ignore this law, treating pirate and privateer alike.

The term 'buccaneer' comes from a French word, boucan, which refers to a type of grill that the buccaneers often used. The original buccaneers were hunters on the island of Haiti. The Spanish drove them off the island and so they formed groups with others who hated the Spanish in order to prey on Spanish ships. Buccaneers often worked with the enemies of Spain but rarely with Letters of Marque, so they were not true privateers. Eventually the term became common for pirates who operated out of the West Indies.

'Corsairs' operated exclusively in the Mediterranean Sea. They were often privateers, authorised to prey on the ships from Christian nations. The most recognised of these are the Corsairs from the Barbary Coast in North Africa. The Barbary Corsairs used galleys until the 17th Century, when they finally switched to sailing ships. Often these privateers would forget their religious ideals and become full-fledged pirates.

A Bit of History

Piracy has been around since the first person decided to send goods by ship. Some of the earliest pirates were Phoenicians who sailed the Mediterranean from about 2000 BC onward. A clay tablet dated to approximately 1350 BC mentioned piracy. In approximately 340 AD a man named Cleomis was honoured by Athens for ransoming some people who were captured by pirates. Archaeologists have even excavated a city in Greece called Aerial, which they think was a haven for pirates.

There are many Roman documents that mention piracy as well. Piracy became a huge problem around 60 BC, with pirates prowling the Mediterranean, particularly the eastern portions and focusing on major trade routes. Julius Caesar was even captured by pirates in 75 BC. Piracy increased until a commander named Pompey was ordered to put a stop to it. He raised an army and within three months had eliminated the pirate threat.

Later on, during the Middle Ages, pirates continued to operate. The best known of the time were the Vikings, although they generally raided settlements rather than attacking sailing vessels. The first known raid by Vikings happened in 793 AD, when they attacked the Holy Island of Lindisfarne. Based largely in Scandinavia, they raided settlements from northern Russia down to Spain, around the British Isles and the Baltic Sea and ventured as far west as North America. At the same time piracy grew along the coast of China and Korea. These pirates were mostly Japanese, but over time the group became more diverse. Coastal raiding was fairly prevalent from the 13th to the 16th Centuries in the East.

The Golden Age of Piracy

Piracy was frequent and widespread from the 15th to the 18th Century AD and this is the period that most people associate with piracy. Some of the most well-known pirates operated during these years, and their activities were the best documented.

During this time there were pirates operating in the Mediterranean, especially around the coast of North Africa, the Far East and in the Caribbean. They were active in other areas as well, but in fewer numbers. This was also the age of privateers who, unlike the pirates, operated with the blessing of their governments.

Early in the 14th Century, the Islamic states in North Africa became havens for pirates. Pirates in this area thrived into the 19th Century and even caused several wars between Tripolitania and the United States.

In the Caribbean the bulk of the piracy was directed at the Spanish. This was the area in which most privateers did their business, and is the home of the buccaneer.

Despite what many believe, piracy is still around, albeit in a slightly different form; there were 224 acts of piracy committed in 1996, according to the International Maritime Bureau.

Modern piracy often targets wealthy or well-known people. Yachtsman Sir Peter Blake was killed by pirates who raided his boat. Other acts of piracy are more reminiscent of Golden Age piracy; for example, pirates will sometimes seize an oil tanker or cargo ship and sell it later.

Another form of piracy is the illegal copying and distribution of media - audio, video, and software. Often piracy of this sort is done over the Internet with unlicensed file sharing programs.

Almost every pirate ship during the Golden Age of Piracy had a code, laid out in the Articles of the ship. Anyone who wanted to be a part of the crew was required to sign the Articles. The rules of the ship were laid out within this document , along with punishments for breaking them.

The shares and compensation for injury were also explained in this document. If a man was injured on a pirate ship, he would receive compensation for his injuries. The more damaging the injury was; the more money he would make. Some ships went so far as to have a sort of life insurance - if a crew member died, his family would be compensated for it.

On top of having paying compensation for injury, pirate ships were run in a democratic manner. The captain was usually voted into office and if he did a poor job he could be voted out. When this happened he would often be dropped off at the next port, though sometimes he would be marooned.

Marooning was a very serious punishment for a very serious act. When a pirate was marooned he was typically given his sword, a pistol, shot and powder and one bottle of water. Usually it was a slow death by dehydration unless he chose to hasten his end.

If captured, pirates could expect another morbid type of punishment - hanging. The hanging was usually a very large event where people would gather to watch. After his death, the body of a particularly notorious pirate would often be covered in tar and hung in a cage near the port as a deterrent to other pirates.

Pirate Myths and the Flag

Most of what people know about pirates is based on what they have seen in films or read in books, but much of this information is fictional.