Anne Bonny and Mary Read - Piracy and Sexual Deviance on the Spanish Main Content from the guide to life, the universe and everything 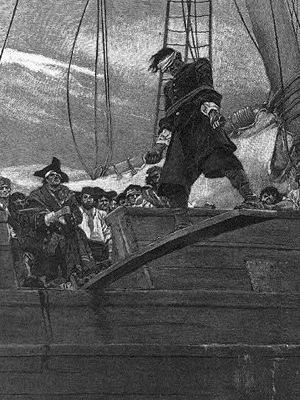 Pirates, freebooters1, buccaneers2: these terms are familiar to us largely through fiction. Swashbuckling tales of adventure on the high seas and cutlasses swinging beneath the Jolly Roger conjure up a romantic picture of life in the Caribbean in the late 17th and early 18th Centuries – when men were men, women were women and ships had naughty figureheads.

The reality, though slightly different from the Errol Flynn version, was much wilder than anything dreamed of by Hollywood writers. Disenfranchised outsiders, victims of institutionalised exploitation, sexual minorities - everyone found a haven in lawless pirate ports such as New Providence in the Bahamas, where they not only raised merry hell with the shipping, but also founded shipboard democracies that were centuries ahead of their time in tolerance and respect for personal diversity.

Among all the colourful accounts of the Spanish Main, the story of Mary Read and Anne Bonny and their strange partnership with 'Calico' Jack Rackham stands out as an example of the ways in which gender, sexuality and personal freedom were defined – and the ways that these definitions were struggled against – in the early 18th Century.

Anne Bonny, née Cormac, was born illegitimately in County Cork, Ireland, in the late 17th Century. Her early childhood reads like a soap opera: her father, who had left his wife for her mother, a serving-maid, passed the child off as his nephew. When his irregular domestic situation caused the failure of his law business, William Cormac moved to the Carolinas with his mistress and daughter, where he prospered as a plantation owner.

Anne was by all accounts a hellion growing up. One story has it that she stabbed her own lady's maid to death, another that she beat insensible a man who tried to force his attentions on her. Finally, she married James Bonny, a ne'er-do-well sometime-pirate who was after the family plantation. When her father, furious about the marriage, disinherited Anne, the pair took off for New Providence – some say after Anne had burned down the plantation in revenge.

Anne took to life in New Providence like a duck to water – not so James, who was an unsuccessful pirate but a slightly more successful informer. Disgusted with him, Anne spent her time with her new friends in New Providence, including Pierre Bouspeut, also known as Pierre the Pansy Pirate, who ran a coffee shop, hair salon and dressmaking business, and was a high-end clothing designer.

One story tells us that Anne and Pierre got wind of a French merchantman passing by with a cargo of rich fabrics, whereupon they organised their first raid. They stole an abandoned wreck, covered the deck and sails with turtle blood, and placed a dressmaker's dummy in the bow, suitably done up as a 'victim'. They sailed out to the merchantman by moonlight, with Anne standing over the bloody 'corpse' with an axe, and the Frenchmen turned over their cargo without a fight. Velvet trousers for all.

Anne became a crew member of the Revenge, captained by Calico Jack Rackham, so-called because of his taste in costume. Anne and Calico Jack apparently had some sort of sexual understanding, though what it was only they knew. James Bonny, however, dragged the pair before Woodes Rogers, the governor of New Providence, and demanded that his wife be returned to him.

Rogers, who owed both Rackham and Anne a favour (they were under amnesty, and had just saved his life), suggested that Rackham be allowed to buy Anne from Bonny. This procedure, known as divorce-by-purchase, was common at the time, and perfectly legitimate; it was probably what James was after anyway. Anne, however, was outraged and refused to be bought by any man, though Rackham was willing to pay. So the governor was forced to order that Anne be flogged and returned to her husband. James was terrified at the prospect, fearing that Anne would kill him, which she was perfectly capable of doing3. Fortunately for James, Anne and Calico Jack ran away and went back to piracy.

Mary Read was born in Devon, England, to a sailor's widow who dressed Mary as a boy in order to conceal from her mother-in-law the fact that Mary was not her brother, who had died, so that the mother-in-law would continue financial support. When Mary was 13, she went into service as a footboy, but then ran away to sea, and, not liking that, she became a soldier in Flanders, where she did very well.

Mary fell in love with a fellow soldier, a Fleming, and they married (with the delighted regiment attending) and settled down to run a popular inn. But when her husband died, Mary went back to the army, and then went to sea again. When the ship she was on was captured by Jack Rackham, she joined the pirates - once again, as a man.

Accounts vary, but somehow Anne and Mary discovered the truth about each other's genders, and apparently became lovers. Most stories say that when Calico Jack first found 'his' Anne in bed with another sailor, he was enraged, but then delighted when he found out he had the only pirate ship around with two female pirates among its crew members. By all accounts, it was a happy arrangement, and by all accounts, Mary and Anne were mightily feared on the Spanish Main. They certainly contributed to the fear engendered by the sight of Calico Jack's personal version of the Jolly Roger.

Alas, all good things come to an end, and the end for pirates usually meant the gallows. When the pirate-hunter Captain Barnet caught up with the Revenge that fatal day, the male members of the crew were mostly drunk. Anne and Mary tried in vain to organise a proper resistance, and then fought like tigresses before being captured.

At trial, both women 'pled their bellies' (claimed pregnancy) to avoid hanging, and both were remanded to prison. It is said that Anne's last words to Rackham on the day he was to be hanged were, 'If you had fought like a man, you would not now be dying like a dog.' Anne was pardoned, for reasons much speculated on but never fully explained, and was never heard from again.

For her part, Mary Read died in prison in Jamaica.

The story of the pirates of the Caribbean in the early 18th Century offers us a glimpse into the reaction of determined people to the stresses of a closed society that regarded poverty and sexual deviance as crimes and women as property. Although their lifestyles could hardly be called heroic, their bravery and determination cannot be doubted.

When asked if she believed that hanging was too harsh a punishment for piracy, Mary Read is said to have replied:

As to hanging, it is no great hardship. For were it not for that, every cowardly fellow would turn pirate and so unfit the sea, that men of courage must starve.

Mary's words speak volumes about what was at stake for the outcasts of this colourful era.

Captain Charles Johnson4, A General History of the Pyrates: London, 1724.

1From the Dutch word 'vrijbuiter', meaning 'plunderer'.2From the French word 'boucanier', meaning 'barbecuers' (of meat, not people).3Another story has it that she once undressed a fencing master with her sword. These people were very romantic.4Probably Daniel Defoe.